Johnson used a pre-recorded speech to the United Nations General Assembly to praise Director-General Tedros Adhanom Ghebreyesus and promise a 30 percent increase in U.K. contributions -- with only a nod to calls by the U.S. to reform the WHO.

“The U.K. supports the efforts of the World Health Organization and of my friend Tedros to explore the aetiology of the [coronavirus] disease, because however great the need for reform, the WHO is still the one body that marshals humanity against the legions of disease,” he said.

“And that is why we in the U.K. – global Britain – are one of the biggest global funders of that organization, contributing £340 [$433] million over the next four years. That’s an increase of 30 percent,” he said.

In this photo made from UNTV video, British Prime Minister Boris Johnson speaks in a pre-recorded message which was played during the 75th session of the United Nations General Assembly, Saturday, Sept. 26, 2020, at UN Headquarters. (UNTV Via AP )

President Trump announced in May that he was withdrawing the U.S. from the organization over concerns that it had helped China cover up the origins of the virus. That was after he had threatened to pull the U.S. out unless the WHO enacted  “major, substantive reforms.”

The U.S. had been the top contributor to the agency, at approximately $450 million a year. China pays about $50 million -- although Beijing recently announced a $2 billion injection of funds for global health..

The U.S. has raised concerns about WHO officials' praise of Chinese "transparency," its ignoring of warnings about the virus from Taiwan, and its repetition of Chinese claims that COVID-19 could not be spread from person to person. Trumpvhas also pointed to opposition from WHO officials to his decision to place a travel ban on China in the initial days of the crisis. 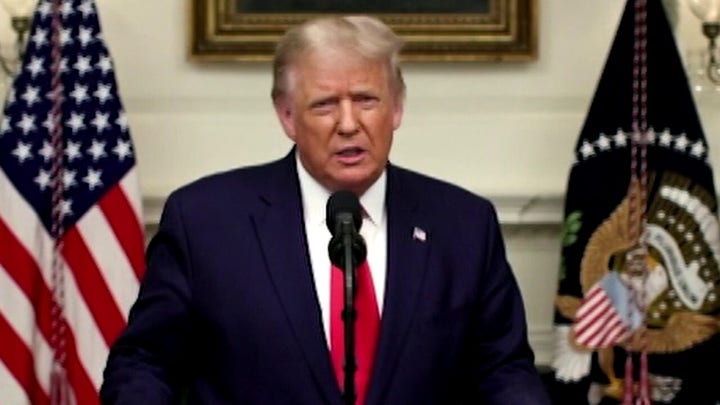 It was a message Trump had repeated this week during his address to the U.N. General Assembly on Tuesday -- when he called for the body to hold China accountable.

Tedros praised Johnson’s speech, calling it “powerful” and said he was “deeply grateful” for the commitment.

“We welcome your contribution of £340 million over the next four years. It will make WHO stronger to tackle future health threats,” he said.

He also noted Johnson’s announced commitment of an additional £500 million to an initiative to get an eventual vaccine to developing countries.

The U.S. and U.K. have traditionally had a strong bond, and Trump has sought to strengthen that relationship -- particularly by being supportive of Britain’s move to exit the European Union.

But the allies have differed on a number of international issues, particularly those related to the United Nations. In particular, the U.K. is one of a number of European nations that has objected to the U.S. effort to trigger a “snapback” of U.N. sanctions on Iran -- claiming that the U.S. is not in a position to do so because it withdrew from the Iran nuclear deal in 2018.

U.K. officials have more recently tried to smooth over those disagreements. At a recent press conference with Secretary of State Mike Pompeo, Foreign Secretary Dominic Raab emphasized areas of agreement between the U.S. and the U.K. on Iran.

"We share the U.S. concerns about Iran and the Iranian threat both on the nuclear side of things but also the wider destabilizing activities in the region,” he said

He also said the 2015 Joint Comprehensive Plan of Action was “not perfect” and said the desire for a “more comprehensive deal” was “in exactly the same place as the U.S.”