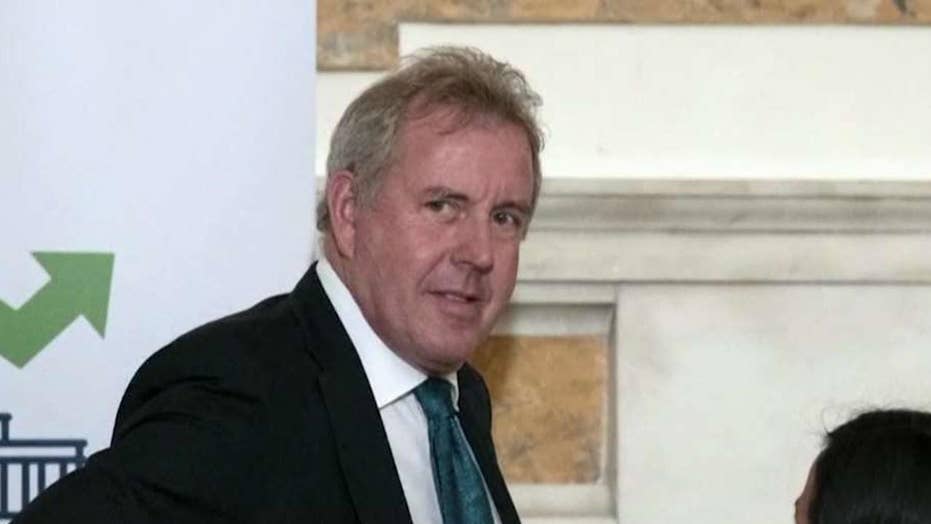 Darroch also reportedly told a U.S. official that Christopher Steele, the author of the discredited anti-Trump dossier that the FBI used to justify secretly monitoring members of the Trump team, was "absolutely legit." Steele, in producing the dossier and several of its false or unsubstantiated claims, was funded by the Hillary Clinton campaign and Democratic National Committee.

The leaked diplomatic documents were published by the The Mail on Sunday, days after the paper published several anti-Trump messages Darroch sent to Downing Street from 2017 to present.

Numerous problems with the Steele dossier's reliability have surfaced, including several issues that were brought to the FBI's attention before it cited the dossier in its FISA application and subsequent renewals. Special Counsel Robert Mueller's report made plain, for example, that then-Trump lawyer Michael Cohen did not travel to Prague to conspire with Russian hackers seeking to access Democrat files, as the dossier alleged. And there was no evidence of a compromising, lurid tape of Trump, nor evidence of Trump-loyal hackers "in the US."

Mueller also was unable to substantiate the dossier's claims that former Trump aide Carter Page had received a large payment relating to the sale of a share of Rosneft, a Russian oil giant. And Fox News has confirmed that Steele provided clearly false information to a State Department contact prior to the FISA warrant being issued -- including a claim that there was a Russian consulate in Miami that was running a foreign influence operation, when no such consulate exists.

In May, California Rep. Devin Nunes, the top Republican on the House Intelligence Committee, formally asked Trump to push outgoing Prime Minister Theresa May for answers as to whether British officials supported intelligence-gathering activities targeted at his campaign associates or coordinated in any way with the author of the dossier.

A DOJ investigation into potential wrongdoing by federal authorities who cited Steele's materials, among other matters, is ongoing. "Crossfire Hurricane," the codename for the FBI's probe of potential Trump administration collusion with Russia, began after suspect contacts were detected between members of the Trump team and foreign actors.

Darroch resigned as Britain's ambassador to the U.S. on Wednesday, after Trump announced the U.S. would "no longer deal" with him. Trump branded the ambassador a "pompous fool" in a Twitter fusillade.

Darroch's memo referring to Trump's "diplomatic vandalism" with Iran was written after then-Foreign Secretary Boris Johnson visited Washington in a failed attempt to persuade the U.S. not to abandon the Iran nuclear agreement.

"The outcome illustrated the paradox of this White House: you got exceptional access, seeing everyone short of the president; but on the substance, the administration is set upon an act of diplomatic vandalism, seemingly for ideological and personality reasons - it was Obama's deal," Darroch wrote.

Trump has long lambasted the multilateral Iran nuclear deal, both as candidate and campaigner, saying it's enabled Iran to fund terrorism abroad and continue to progress towards nuclear weapons.

Faced with crushing sanctions reimposed by the Trump administration, Iran announced this month it was working rapidly to develop weapons-grade uranium and would not stop unless remaining signatories to the deal found a way to alleviate the economic pressure.

HAPPIER TIMES: RECAPPING TRUMP'S VISIT WITH THE QUEEN OF ENGLAND IN JUNE

In previously leaked documents, Darroch described the Trump administration as "diplomatically clumsy and inept" and said he doubted it would become "substantially more normal."

"I do not know the Ambassador, but he is not liked or well thought of within the U.S.," Trump wrote on Twitter, responding to those remarks. "We will no longer deal with him."

British police are currently hunting the culprits behind the leak — and, contentiously, have warned journalists that publishing the documents "could also constitute a criminal offense."

Police are investigating the leak as a potential breach of the Official Secrets Act, which bars public servants from making "damaging" disclosures of classified material. Breaking the act carries a maximum sentence of two years in prison, though prosecutions are rare.

Yet both Johnson and Jeremy Hunt, the two contenders to become Britain's next prime minister, have defended the media's right to publish.

"We have to make sure that we defend the right of journalists to publish leaks when they are in the national interest," Hunt said.

British officials have said they have no evidence that hacking was involved in the documents' release, and that the culprit is likely to be found among politicians or civil servants in London.

International incidents involving British diplomats in the U.S. are rare, but not unprecedented. British Ambassador Lionel Sackville-West was sacked in 1888 for writing the so-called Murchison letter, which touched off a firestorm by indicating that Britain preferred Grover Cleveland over Republican Benjamin Harrison. (Republicans publicized the letter, helping Harrison win the White House.)

And in May 1856, President Franklin Pierce expelled John F. Crampton, then the British ambassador to the U.S., and several other British diplomats, following a lengthy spat over British efforts to recruit North Americans to fight in Crimea.

"It's not entirely unprecedented," Dan Drezner, professor of International Politics at The Fletcher School of Tufts University, told Fox News. "When WikiLeaks released a trove of diplomatic cables, the Bolivarian leader of Ecuador expelled the U.S. Ambassador. Even in that case, however, the Ecuadoran government went through the proper diplomatic channels. A PNG [persona non grata]-by-tweet for the leak of cables confirming mainstream media reporting of the Trump administration is definitely new."