President Trump mixed high-level diplomacy with schoolyard taunts as he kicked off his overseas visit meeting with Queen Elizabeth II at Buckingham Palace and later touring Westminster Abbey -- while sparring on the side with one of his biggest British critics, London Mayor Sadiq Khan.

The London itinerary is part of a packed overseas agenda that includes a state dinner at the palace and D-Day commemoration ceremonies.

At their initial visit to the palace early Monday morning, the president and first lady Melania Trump had a private lunch with the Queen, later inspecting a collection of artifacts including an 18th-century map of New York, historic photos of golf at St. Andrews and books about birds and George Washington. He then participated in a wreath-laying at the Grave of the Unknown Warrior at Westminster Abbey.

The visit began with formalities befitting a state visit. The Trumps were greeted by Prince Charles and his wife Camilla, the Duchess of Cornwall, at the palace. Trump could be seen chatting with members of the Guard of Honor as the rest of the American delegation, from a terrace, observed the elaborate arrival ceremony, complete with the playing of “The Star-Spangled Banner.” Royal gun salutes were fired from nearby Green Park and from the Tower of London. 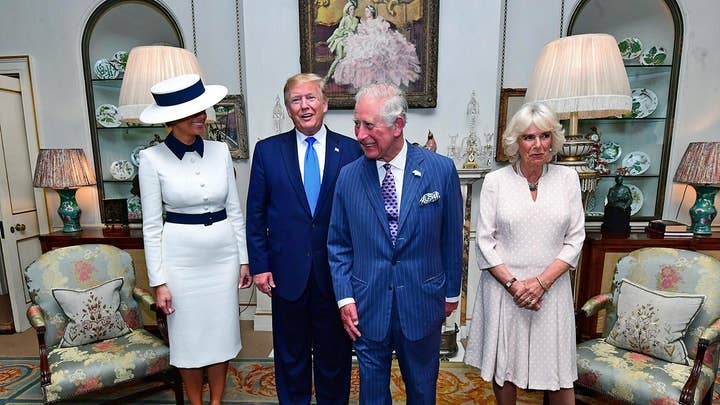 Juxtaposed against that scene, however, was an opening scrap between Trump and London Mayor Khan, who penned a critical column of the president he called a "global threat." In the column titled, “It’s un-British to roll out the red carpet for Donald Trump,” Khan listed Trump’s most controversial policies and likened them to the actions of European dictators of the 1930s and 40s.

Before he even arrived in London, Trump fired back calling Khan the "twin" of New York City’s liberal Mayor Bill de Blasio “except shorter.”

Khan's office said in response that the comment is "much more serious than childish insults which should be beneath the President of the United States. Sadiq is representing the progressive values of London and our country warning that Donald Trump is the most egregious example of a growing far-right threat around the globe, which is putting at risk the basic values that have defined our liberal democracies for more than 70 years."

Trump attempted to clarify that he would not let Khan dampen his trip and said he looks forward to his visit.

In another side skirmish, Trump began his visit by venting about CNN, tweeting: “Just arrived in the United Kingdom. The only problem is that @CNN is the primary source of news available from the U.S. After watching it for a short while, I turned it off. All negative & so much Fake News, very bad for U.S. Big ratings drop. Why doesn’t owner @ATT do something?”

Trump will be in the U.K. from Monday to Wednesday to commemorate the 75th anniversary of D-Day, which comes at a tumultuous time in British politics, with Prime Minister Theresa May due to step down on Friday.

The agenda for Trump's weeklong journey is mostly ceremonial: a state visit and an audience with Queen Elizabeth II in London, D-Day commemoration ceremonies on both sides of the English Channel and his first presidential visit to Ireland, which will include a stay at his coastal golf club.

CARAFANO: THIS IS TRUMP'S TOP JOB IN LONDON

But the U.S. president arrives at a precarious moment, as he faces a fresh round of impeachment fervor back home and uncertainty on the other side of the Atlantic Ocean. May has faced months of political turmoil over Brexit and French President Emmanuel Macron is expected to use the 75th anniversary of the World War II battle that turned the tide on the Western Front to call for strengthening the multinational ties the U.S. president has frayed.

A year ago, Trump also took aim at his hosts before landing on English soil, blasting May in an interview just hours she hosted him for dinner. Though he has spared May so far this time, he has praised her rival, prime ministerial hopeful Boris Johnson, just days before May steps down as Conservative leader on Friday for failing to secure a Brexit deal.

"I think Boris would do a very good job. I think he would be excellent," Trump told The Sun. "I like him. I have always liked him. I don't know that he is going to be chosen, but I think he is a very good guy, a very talented person."

It was not clear if the Trump endorsement would hurt or help Johnson's chances of becoming Britain's next leader.

After lunch with Queen Elizabeth II, Trump will be honored at an extravagant state dinner at Buckingham Palace. Demonstrators are expected, including the possible return of an inflatable balloon depicting the president as a baby.

Fox News’ Edmund DeMarche and The Associated Press contributed to this report.