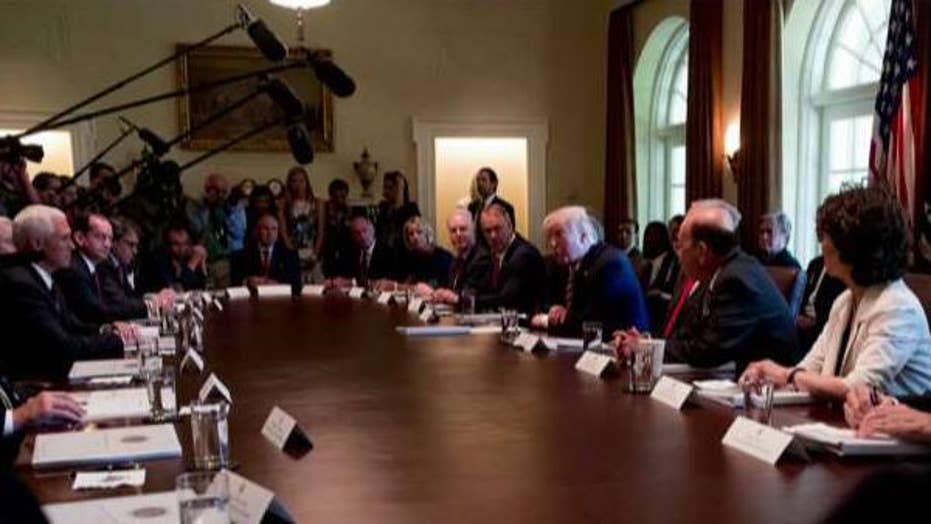 The comings and goings of President Trump's Cabinet

President Trump has long promised to create jobs, and has consistently delivered -- especially in his own White House and Cabinet, where rapid turnover is showing no signs of slowing down as 2018 comes to a close.

High-profile departures in the Trump administration -- from former Health and Human Services Secretary Tom Price and Press Secretary Sean Spicer to fired Secretary of State Rex Tillerson (whom Trump recently characterized as "lazy as hell" and "dumb as a rock") -- have attracted the most attention. They have contributed to what some analysts have called an unprecedented number of high-level Cabinet departures going back 100 years.

The most popular parlor game in Washington right now centers on who will replace outgoing Chief of Staff John Kelly.

TRUMP REVEALS CHIEF OF STAFF SEARCH DOWN TO 5 CANDIDATES

But dozens of Executive Branch offices, both inside and outside 1600 Pennsylvania Avenue, have emptied and filled at historic rates, with and without fanfare. The exits have included unfriendly dismissals, voluntary moves to the private sector, and other resignations.

The headline-grabbing departures include two national security advisers -- H.R. McMaster and Michael Flynn, who was booted for misleading the White House about conversations with the Russian ambassador and is now facing sentencing for lying to the FBI. John Bolton now runs the national security ship.

Before Kelly, former GOP chairman Reince Priebus also came and went at the helm of the White House operation. He has since dished on the drama inside the Oval Office in the book "The Gatekeepers."

"Take everything you've heard and multiply it by 50," Priebus said.

Within the Cabinet, Attorney General Jeff Sessions was the latest to be forced out, submitting his resignation the day after the midterms at the request of the president. Trump spent the last year publicly criticizing his DOJ leader for recusing himself in the Russia probe and opening the door to the special counsel investigation. EPA Administrator Scott Pruitt resigned over the summer amid numerous ethics scandals, replaced by Acting Administrator Andrew Wheeler. Veterans Affairs Secretary David Shulkin was pushed out amid his own ethics controversy. U.N. Ambassador Nikki Haley also is planning to leave, without controversy, and State Department official and former Fox News journalist Heather Nauert is Trump's pick to succeed her.

Within the White House, the National Security Council has been the scene of considerable turnover, and not just at the top.

Senior Director for Africa Robin Townley, for example, left the administration in early 2017 after the CIA refused to grant him an elite-level Sensitive Compartmented Information security clearance that he needed to serve on the National Security Council (NSC).

Ex-FBI assistant director: Comey a disgrace to the agency

Townley, a top deputy to Flynn, had long held a less selective top-secret security clearance related to his service as a Marine. Sources told Politico that Flynn and Townley viewed the rejection as a "hit job from inside the CIA on Flynn and the people close to him" because of Townley's critical views of the intelligence community.

Ezra Cohen-Watnick was reportedly forced out as a senior intelligence director at the NSC as well, for supposedly leaking information about so-called "unmasking" activities by Obama administration officials to California Republican Rep. Devin Nunes, the chair of the House Intelligence Committee. (“Unmasking” involves asking U.S. intelligence authorities to fill in the redacted names of U.S. citizens whose comments are caught up in intelligence agencies' foreign intelligence intercepts, which are routinely removed to protect their Fourth Amendment rights. Such revelations are supposed to be relatively rare, clearly justified and tightly controlled.)

Cohen-Watnick's attorney denied the allegations, saying that “he never showed the documents to Nunes," had never "met with Nunes" and had "nothing to do with Nunes.” Bloomberg reported that Trump personally directed the Department of Justice to hire Cohen-Watnick after the episode.

Several other relatively low-profile White House staffers who had key roles in major developments have also left their posts in the past two years. Keith Schiller, the president's longtime personal bodyguard who attracted scrutiny after being photographed accidentally exposing Defense Secretary James Mattis' phone number, has departed as director of Oval Office operations.

"At some point, everybody leaves.  Everybody. People leave. That's Washington."

Schiller famously hand-delivered the notice of FBI Director James Comey's termination to FBI headquarters in Washington, D.C. in May 2017 -- but Comey was not there, and instead learned of his sudden firing from a television news report while in Los Angeles.

Also departed is White House Counsel Don McGahn, who oversaw not only the White House's response to Special Counsel Robert Mueller's probe, but also the contentious confirmation of Supreme Court Justice Brett Kavanaugh amid a series of lurid and uncorroborated sexual misconduct allegations. McGahn, who left in October, has been replaced by Pat Cipollone.

In a rare interview, Trump's son-in-law and senior adviser Jared Kushner told Fox News' "Hannity" exclusively on Monday that Cipollone "is going to be fabulous."

Marc Short, Trump's former legislative affairs director and a former high-level aide to Vice President Mike Pence, left the White House in July to consult and become a fellow at the University of Virginia's Miller Center School of Public Affairs. His appointment to the one-year fellowship prompted fierce, partisan backlash from students and faculty at UVA.

Short, who previously obtained his MBA from UVA, departed just as the confirmation battle over Kavanaugh was intensifying. His record as the White House's liaison to Capitol Hill staffers and politicians was largely seen as successful, even if some of the results he oversaw were mixed.

Although he helped ensure the passage of Trump's historic $1.5 trillion tax overhaul last year, Short was unable to push the president's longstanding effort to repeal ObamaCare over the finish line. That legislative measure -- panned by Democrats and some Republicans for failing to offer a viable health care alternative -- was defeated in a dramatic 11th-hour vote by the late Arizona GOP Sen. John McCain.

The White House tapped Shahira Knight, who had served on the White House's National Economic Council and played a major role in developing the tax legislation, to replace Short.

Other exits from the Trump orbit have been comparably ugly and unceremonious.

White House Staff Secretary Rob Porter was forced to resign earlier this year after two of his ex-wives came forward with domestic abuse allegations. Trump has reportedly expressed a desire to see Porter return to the White House at some point.

Former Deputy National Security adviser Mira Ricardel also lost her post last month after an unusual public spat with first lady Melania Trump. The Wall Street Journal reported in mid-November that Ricardel had clashed with the first lady's staff over seating arrangements on a plane during her October trip to Africa. The paper added that the first lady's office suspected Ricardel of leaking negative stories about the first lady and her staff.

Dr. Ronny Jackson, formerly Trump's personal physician and nominee to lead the Department of Veterans Affairs, is now neither after he was besieged by unproven and disputed allegations compiled by Montana Democratic Sen. Jon Tester’s office concerning his prescription-drug practices and use of alcohol. (Trump has bitterly feuded with Tester, the top Democrat on the Republican-controlled Senate Veteran Affairs Committee, ever since the episode.)

Perhaps the most storied and colorful departure was that of Anthony Scaramucci, who left as communications director after a mere 11 days on the job (or 10, depending how you count it). Trump confidant Hope Hicks assumed the job, then resigned early this year.

The flurry of departures from the White House has continued into 2018's final weeks. Pence Chief of Staff Nick Ayers announced Sunday he will leave the White House at the end of the year, leaving unclear who will replace Kelly, as Ayers was the favorite for that role.

White House Counselor Kellyanne Conway told Fox News on Tuesday that Kelly, a retired Marine Corps general, might stay on briefly into the new year while the president finds a replacement.

For his part, Trump has clearly signaled that replacements for other roles are very likely coming up in the new year.