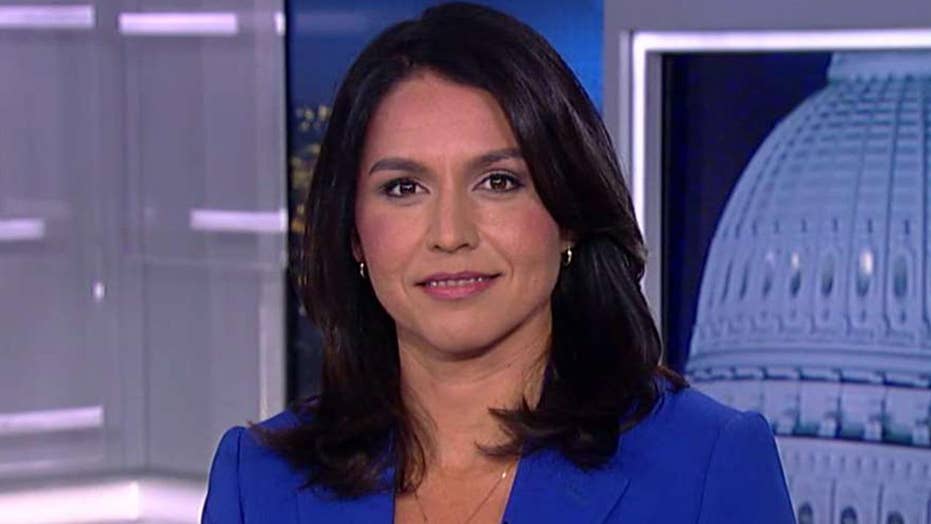 Rep. Tulsi Gabbard warns that a war with Iran would make the Iraq War 'look like a cakewalk'

The devastation and the cost of a conflict with Iran would be far greater than anything we've experienced so far in Iraq, says Democratic presidential candidate Congresswoman Tulsi Gabbard.

On “America’s Newsroom,” Gabbard told hosts Bill Hemmer and Sandra Smith that the United States is on the brink of war with Iran, echoing comments she made during an appearance on “Tucker Carlson Tonight” Thursday night.

"I know where this path leads us and I'm concerned because the American people don't seem to be prepared for how devastating and costly such a war would be," Gabbard said.

Gabbard, 38, referred to her time as a service member, saying, “I’m very familiar with the region, the cost of war, and where this path leads us. And, the American people need to understand how devastating and costly such a war would be, how it would impact almost every part of our lives.

“It would undermine our national security. It would strengthen terrorist groups like ISIS and Al Qaeda. It would take a terrible human toll: the cost of countless American service members’ lives: my brothers and sisters in uniform. The cost to civilians in the region…Increasing the refugee crisis across Europe…And, it would cost trillions of dollars. Trillions of dollars that would come out of our pockets. Taxpayers’ pockets. To pay for this endless war. Resources that we would not be able to use for things like rebuilding our crumbling infrastructure.”

President Trump  approved the Pentagon’s plan to send about 1,600 troops to the Middle East amid rising tensions with Iran, U.S. officials told Fox News on Friday.

Fewer than 1,000 new troops are deploying, but about 600 soldiers who are already deployed will be extended. The 600 are part of a Patriot missile battalion currently deployed in the region.

“Instead, by the Trump administration pulling out from this deal, they’ve essentially given Iran an excuse to be able to restart this Iran nuclear weapons program,” said Gabbard. “That makes us and the world far less safe.

"So, as president, I would re-enter the Iran nuclear deal. I would work out the difference separately outside of that and de-escalate the tensions that are, unfortunately, bringing us to the point where we are at a brink of war with Iran today.

“As president, I will end these wasteful regime-change wars. Whether it’s against countries like Venezuela, Iran, or Syria…Work to end this new Cold War that we are in with ever-increasing tensions between the United States and nuclear-armed countries like Russia and China, and end this nuclear arms race and take the trillions of dollars that we would continue to spend on these wars and weapons if we continue down the path we are on. And, take those dollars and put them back in the pockets of the American people. Use those dollars to serve the needs of the American people,” she said.