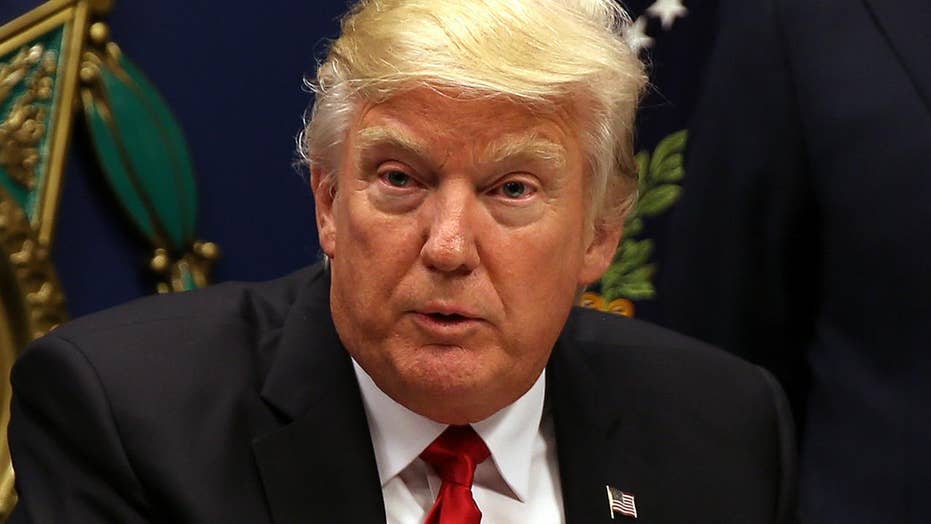 President Trump’s executive order “Protecting the Nation from Foreign Terrorist Entry into the United States” stirred immediate controversy after it was signed Friday. Here is what you need to know about the executive order:

What does President Trump’s executive order do?

The purpose of the executive order is detecting “individuals with terrorist ties and stopping them from entering the United States” for 90 days if they come from any of seven countries -- Iran, Iraq, Libya, Somalia, Sudan, Syria and Yemen. The order suspends those granted refugee status for 120 days while the Trump administration reviews and reworks immigration screening procedures.

The order also states that refugees who are already in the process of being vetted may be admitted to the United States, but only after undergoing the revised screening processes.

Although the order is being characterized as a "Muslim ban," which Trump discussed during his campaign, it is worth noting that President Trump did not cherry-pick these seven countries.

“The seven countries named in the Executive Order are the same countries previously identified by the Obama administration as sources of terror,” Trump said in a statement on Sunday. “To be clear, this is not a Muslim ban, as the media is falsely reporting. This is not about religion -- this is about terror and keeping our country safe,” noting that there are at least 40 countries that are predominantly Muslim that “are not affected” by the order.

“It is deeply irresponsible to characterize this Executive Order as a ‘Muslim ban’ -- it is not,” Chairman of House Homeland Security Committee Michael McCaul, R-Texas, told Fox News. “The order puts a pause on refugee admissions and temporarily halts immigration from seven countries, each of which was already designated by the Obama administration as an area of terror concern.”

The seven countries were originally flagged by the Obama administration for the Visa Waiver Program Improvement and Terrorist Travel Prevention Act of 2015, which restricted access to U.S. Customs and Border Protection’s Visa Waiver Program for citizens of Iran, Iraq, Sudan and Syria. In 2016, the Department of Homeland Security under the Obama administration added three additional countries, which are reflected in President Trump’s executive order: Libya, Somalia and Yemen.

The executive order asks for streamlined communications and information from departments of State and Homeland Security, along with the intelligence community, about the listed countries to ensure those who seek entry into the U.S. are not a “security or public safety threat.” The countries have 60 days to start giving the information to the United States and, if they don’t, those seeking entry will be prohibited from entering the United States.

On Saturday, the Department of Homeland Security said that President Trump’s order did apply to green card holders traveling to the United States from those seven countries. The White House confirmed this position Saturday night, and said that green card holders would be evaluated on a “case-by-case” basis.

The American Civil Liberties Union and federal courts in Brooklyn, Boston and Virginia blocked the government from enforcing the executive order against visa and green-card holders.

The next day, on NBC’s "Meet the Press," White House Chief of Staff Reince Priebus changed the stance.

“As far as green card holders, moving forward, it doesn’t affect them,” Priebus said. “If you’re an American citizen traveling back and forth to Libya, you are likely to be subjected to further questioning when you come into an airport.”  He also noted that customs and border patrol agents have “discretionary authority” when they suspect someone is “up to no good” when they travel back and forth to countries listed in the order.

What is the global reaction?

The Iranian foreign ministry and the Iraqi parliament have approved “reciprocity measures” -- meaning U.S. citizens cannot enter the countries until the ban is lifted.

But President Trump received support from Czech President Milos Zeman. A spokesperson for Zeman said “U.S. President Trump protects his country. He’s concerned with the safety of his citizens. Exactly what EU elites do not do.”

Senate Democrats are expected to roll out legislation Monday evening in an effort to repeal Trump's order.

Sen. Dianne Feinstein, D-Calif., will introduce two bills. The first would rescind the executive order, and the second would amend the Immigration and Nationality Act to ensure additional congressional oversight of the president’s authority to bar classes of people from entering the United States, according to Feinstein’s office.

“Painting more than 200 million people with the same broad brush is contrary to the principles on which this nation was founded and will not make us any safer,” Feinstein said in a statement.