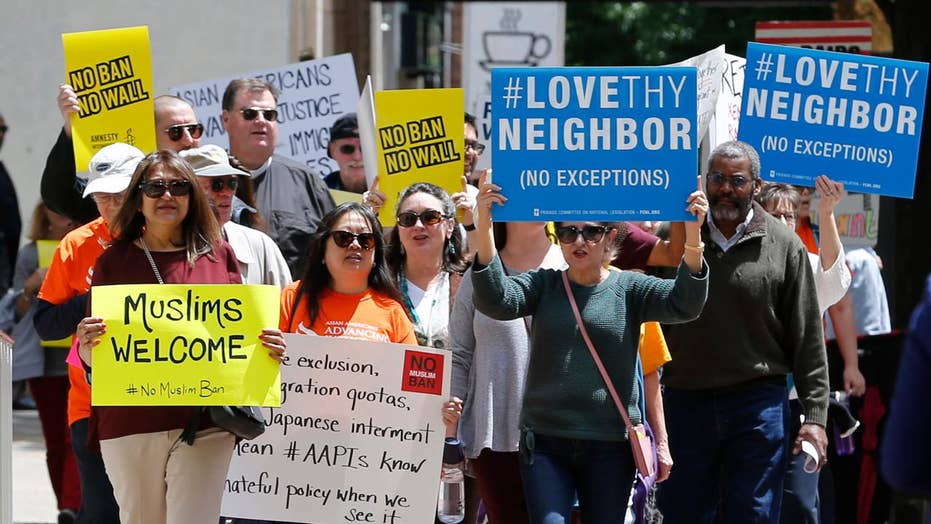 The key issue before a three-judge panel is whether the president’s comments before he took office – suggesting he would ban Muslims from entering the country -- provides sufficient legal grounds to rule his order unconstitutional.

In March, a federal judge in Hawaii enjoined the order from taking effect, not based on the language of the directive, but rather the “religious animus” of comments Trump and his advocates made about the policy.

“The [lower] court’s reliance on such statements in the face of a religion-neutral order is fundamentally wrong,” acting Solicitor General Jeffrey Wall wrote to the court defending the order.

Wall argues the president’s policy is not a “Muslim ban,” but rather Mr. Trump’s good faith effort to protect rights while securing the homeland from foreign terrorists. And that the president’s executive authority in protecting the country and enforcing immigration laws in this matter is beyond judicial review.

The order would temporarily halt refugees from Iran, Libya, Somalia, Sudan, Syria and Yemen from entering the country. It also freezes refugee admissions so intelligence and security officials can review existing admission procedures.

This will be the second time the Ninth Circuit Court of Appeals has heard a government appeal on this matter. Earlier this year a different panel of judges affirmed a lower court injunction against the president’s similar first travel ban order, which he revoked in issuing his second version.

Several weeks ago Trump blasted the Ninth Circuit saying his opponents are “judge shopping” in the court that covers the western United States.

The three judges hearing Monday’s case were randomly chosen from the Ninth Circuit’s members--all three were appointed by President Clinton. While some other Ninth Circuit judges have said the president’s order is on sound legal ground – they were not impaneled on either case.

“The president seeks to enact a thinly veiled Muslim ban, shorn of procedural protections and premised on the belief that those who practice Islam are a danger to our country,” says plaintiffs’ lawyer Neal Katyal who represents the state of Hawaii and an Imam who lives in the islands.

They argue the travel ban is unconstitutional because it disfavors Muslims. The ban also, allegedly, harms Hawaii’s economy and university community by cutting off potential tourists and student applicants from overseas. “The order is the embodiment of a policy of religious animus,” Katyal argues. “The government’s only real response is to ask the court to close its eyes to abundant evidence of discrimination.”

Both sides will get 30 minutes to present their arguments. A live camera feed will also originate from inside the courtroom.

Last week in Richmond, Virginia, another federal appellate court heard similar arguments over the president’s order. Either case – or both – could end up before the Supreme Court.