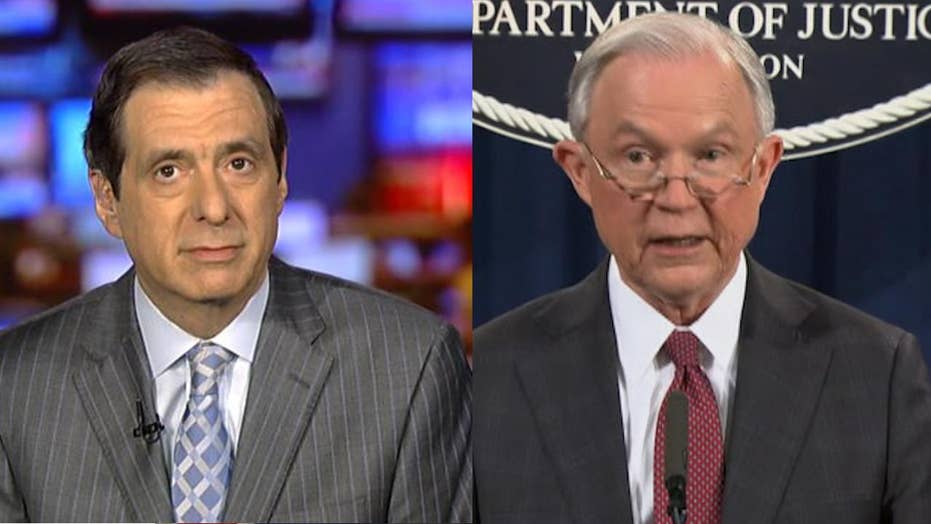 Howard Kurtz weighs in on the uproar fueled by President Trump naming a loyalist as acting Attorney General.

It was, for once, a predictable bombshell.

And met by equally predictable waves of media outrage.

Was there anyone in America, paying the slightest bit of attention, who didn't know that President Trump was going to fire Jeff Sessions after the midterms?

I mean, the president has practically been announcing it with a bullhorn.

Sure, we didn't know it was going to happen the day after the Democrats won control of the House (although George W. Bush ousted Don Rumsfeld the day after an even more disastrous election).

But come on. Trump didn't even bother to hide the motive.

He has been angry at his attorney general for a year and a half for recusing himself from the Russia investigation.

In truth, Sessions had no choice. As a senator, he was a campaign surrogate for Trump and wound up being questioned on the Hill over his own contacts with Russian officials.

He called Sessions weak and beleaguered. He insisted the Justice Department should be investigating Democrats. Someone even leaked word that Trump privately called his own appointee Mr. Magoo.

It was humiliating, but Sessions hung in there, doing his job, although he knew his days were numbered. He said right there in his resignation letter that he was quitting at the president's request.

But what really fueled the media’s "crisis" coverage was Trump's choice for acting attorney general. It wasn't Sessions' deputy, Rod Rosenstein, the man who appointed Robert Mueller. It was Sessions' chief of staff, Matt Whitaker.

Whitaker is a former prosecutor, as well as a conservative activist, but he is obscure. He is a Trump loyalist, once described as the president's "eyes and ears" at DOJ.

What's more, as a CNN contributor and at other times, he has trashed the Mueller investigation that he will now be overseeing. He's suggesting that Justice could curtail the special counsel's probe by cutting his funding.

"The truth is there was no collusion with the Russians and the Trump campaign," Whitaker once said. As for the left, "the last thing they want right now is for the truth to come out, and for the fact that there's not a single piece of evidence that demonstrates that the Trump campaign had any illegal or any improper relationships with the Russians. It's that simple."

So Whitaker has, to put it mildly, a rather dim view of the investigation. And his associates are telling reporters he has no intention of recusing himself. Of course not — that's why Trump wants him.

So it's a big deal that oversight of the Russia probe is moving from Rosenstein, who likes the job Mueller is doing, to a man who's been so critical of the investigation. And criticism from House Democrats who'll soon be in a position to scrutinize these matters is fueling the story.

But a couple of cautionary notes. Whitaker hasn't done anything to impede the investigation since his appointment was announced. And it's possible, if only as a matter of political strategy, that he may not.

It's also possible, amid reports that Mueller is writing his report, that his prosecutors haven't found any evidence of collusion, or obstruction, and he'll be wrapping up soon.

Sessions has been toast for a long time. Whitaker could do something to cause a crisis, at least until a permanent AG (Chris Christie?) is named.

But unless and until there's an effort to rein in Mueller, the media might avoid keeping this cranked up to an 11.