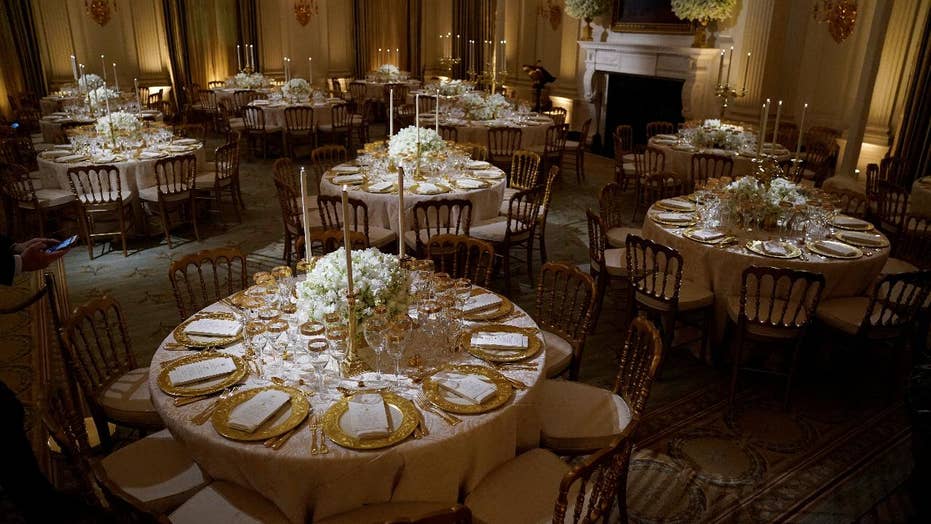 Tuesday night is expected to be an affair to remember as the White House hosts French President Emmanuel Macron for President Trump’s first state dinner.

About 150 people are expected to attend the event, which is noticeably smaller than ones held by former President Barack Obama on the South Lawn of the White House.

Some details, such as first lady Melania Trump’s dress and the official guest list, are being kept mum ahead of the dinner. But others, such as the menu and some of the attendees, have already been revealed.

The Macrons have already arrived at the White House ahead of the event.

Read on for a look at the ornate event.

It is Trump’s first state dinner

President Trump did not host a state dinner during his first year in office. (Reuters/Jim Bourg)

Although other foreign leaders have visited the White House, the April dinner will be Trump’s first time hosting an official state dinner.

The visit of Macron and his wife, Brigitte, will celebrate nearly 250 years of U.S.-French relations.

French influences are included in the menu

Served at the dinner will be a meal that will “showcase the best of America’s cuisines and traditions, with nuances of French influences” prepared by White House chef Cristeta Comerford, according to the White House.

Here's a look at the menu:

The first course will include greens from the White House kitchen’s garden, according to the White House. The jambalaya is to be cooked New Orleans-style.

The wines served at the dinner were also chosen to “embody the historic friendship between the United States and France,” the White House said. They include: the Domaine Serene Chardonnay “Evenstad Reserve” 2015, the Domaine Drouhin Pinot Noir “Laurène” 2014 and the Schramsberg Demi-Sec “Crèmant.”

The Washington National Opera from the John F. Kennedy Center for Performing Arts will provide entertainment for the dinner.

As is the tradition, much of the responsibility for the state dinner, including making sure the guest of honor feels special, fell to first lady Melania Trump.

Experienced with design, Melania Trump opted out of bringing an outside event planner on board for the dinner’s planning, Politico reported. Instead, she relied on her own expertise as well as her aides, including social secretary Rickie Niceta.

“Mrs. Trump has been involved in every detail of the planning. Over the past few months, she has been very focused on guest experience, tradition and our country’s rich history with France,” Stephanie Grisham, her press secretary, told Politico.

To be held in the State Dining Room, the dinner will feature about 150 guests -- notably smaller than state dinners held by former President Barack Obama, who invited hundreds of people. Those dinners were held under a tented pavilion on the South Lawn, as no room in the White House is able to accomodate that many people.

It was Melania Trump’s decision that the guest list be kept shorter as the first lady believes an event “should never be too crowded,” Niceta told The Washington Post. “You should be able to move; you should be able to see the White House and feel special that you’re here.”

How to host a state dinner at the White House

Lauren Blanchard has the details from Washington, D.C.

It’s also up to Melania Trump to pay attention to every single detail to ensure guests feel at home in the White House, Grisham told the newspaper.

“She doesn’t just choose colors or make things pretty. She is really wanting to make sure that people feel at home, that people look comfortable,” she said.

The color scheme chosen by the first lady for the dinner is cream and gold, the White House said. She is also incorporating Clinton and Bush (43) china with a “green color palette to complement the spring green and white flowers that will be featured in the State Dining Room.”

While the official guest list has not been released, a White House official told The Associated Press that no journalists or Democratic members of Congress were invited.

When the Macrons arrived at the White House Tuesday, they were greeted with much fanfare. (Reuters/Joshua Roberts)

The Macrons and Trumps dined privately Monday at Mount Vernon, the home of America’s first president, George Washington, in Virginia. The White House said the setting served as a reminder of France’s “unique status” as America’s first ally.

On Tuesday morning, when Macron pulled up to the White House driveway, the Trumps were joined by Cabinet officials, lawmakers, military families and others to greet the French president with fanfare.

The two couples also planted a sapling tree, a gift from the Macrons. The tree is from Belleau Woods, a historical landmark that was the site of a deadly World War I battle that left more than 9,000 Americans dead.

The visit offers Macron his first Oval Office meeting and a joint White House news conference with Trump. There was also a State Department lunch hosted by Vice President Mike Pence before Macron and his wife arrived for the state dinner.