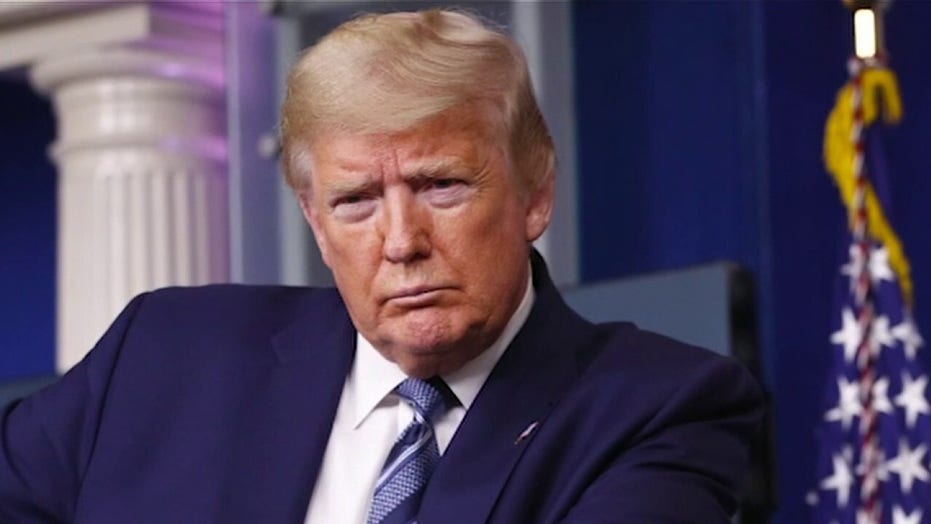 Twitter CEO Jack Dorsey was informed in advance by the company’s staff of a decision to tag a tweet by President Donald Trump as ‘glorifying violence’, a spokeswoman for the company said; Kristin Fisher reports.

President Trump on Sunday afternoon expressed outrage over an apparent lack of law enforcement arrests of rioters who have brought violence upon several American cities following the death of George Floyd in Minneapolis last week.

"SO TERRIBLE! Where are the arrests and LONG TERM jail sentences?" Trump asked in reaction to a tweet claiming to show a graphic video of a Dallas man being beaten into critical condition while trying to defend a business.

Full video of the incident taken by Elijah Schaffer of Blaze TV purportedly showed the man on the receiving end of the beatdown first attempted to chase away the rioters while brandishing what appeared to be a large blade or sword.

BARR: VIOLENCE FROM ANTIFA, OTHER GROUPS, 'IS DOMESTIC TERRORISM AND WILL BE TREATED ACCORDINGLY'

Floyd died Monday after a Minneapolis Police Department officer kneeled on his neck for several minutes while Floyd was handcuffed and begging for air. The officer, Derek Chauvin, was arrested and charged with third-degree murder and manslaughter.

Floyd's death triggered protests in Minneapolis and nationwide against police brutality and racial inequality, representing a boiling over of racial tensions following multiple incidents of black people being killed in racially charged interactions with police and white people in recent months.

Many of the protests have been peaceful -- and in some cases, police have marched with the protesters. But others have turned to riots complete with violence against cops, arson, looting and more, the activity Trump decried late Sunday afternoon into the early evening.

"Law & Order in Philadelphia, NOW!" Trump tweeted in response to the riots in the Pennsylvania city. "They are looting stores. Call in our great National Guard like they FINALLY did (thank you President Trump) last night in Minneapolis. Is this what voters want with Sleepy Joe? All Dems!"

Trump added in a subsequent tweet: "Get tough Democrat Mayors and Governors. These people are ANARCHISTS. Call in our National Guard NOW. The World is watching and laughing at you and Sleepy Joe. Is this what America wants? NO!!!"

Trump earlier in the day said his administration would designate the left-wing group Antifa, which has apparently been behind at least some of the violence in the riots over the past few days, a domestic terrorist organization. Attorney General William Barr followed that move from Trump with a statement saying that "[i]t is time to stop watching the violence and to confront and stop it... The violence instigated and carried out by Antifa and other similar groups in connection with the rioting is domestic terrorism and will be treated accordingly."

Trump continued his tweetstorm by retweeting conservative radio host Buck Sexton, who commented that the riots aren't "going to stop until the good guys are willing to use overwhelming force against the bad guys."

Trump also tweeted "STRENGTH!" in response to a tweet from the account @seancordicon, which was shortly thereafter suspended. It's not clear why the account was taken down.

As the U.S. braces for another night of violence Sunday, nearly two dozen cities and the entire state of Arizona have instituted curfews aimed at keeping people inside and helping police more easily identify lawbreakers. Most of those curfews appear unlikely to be successfully enforced -- looting in Philadelphia continued unabated Sunday night as the clock struck 6 p.m., the time that curfew went into effect.