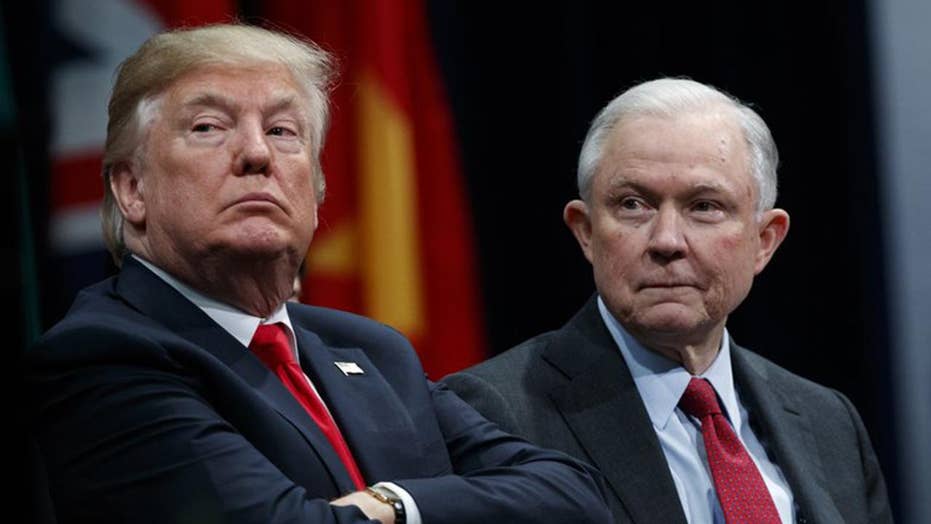 President Trump calls on his attorney general to end the Mueller investigation. John Roberts reports from the White House.

“This is a terrible situation and Attorney General Jeff Sessions should stop this Rigged Witch Hunt right now, before it continues to stain our country any further,” Trump tweeted. “Bob Mueller is totally conflicted, and his 17 Angry Democrats that are doing his dirty work are a disgrace to USA!”

The tweet renewed Democratic complaints that Trump is wrongly challenging the independence of the special counsel. Trump has repeatedly blasted the probe as a “witch hunt,” but the call for Sessions to intervene represents another escalation.

Sessions, however, already recused himself last year – handing off oversight to Deputy Attorney General Rod Rosenstein. So he is unlikely to act.

A Justice Department spokesperson had no comment on the tweet when reached by Fox News. Another source familiar with the investigation downplayed the implications of the tweet – as Trump previously has vented his frustration with both the Russia probe and Sessions’ recusal from it.

Trump lawyer Rudy Giuliani said in a statement: “We have been saying for months that it is time to bring this inquiry to an end. The President has expressed the same opinion.”

Trump afterward tweeted concerns about the trial of ex-campaign boss Paul Manafort, which entered its second day on Wednesday morning.

“Paul Manafort worked for Ronald Reagan, Bob Dole and many other highly prominent and respected political leaders. He worked for me for a very short time. Why didn’t government tell me that he was under investigation. These old charges have nothing to do with Collusion - a Hoax!” he tweeted.

Trump went on to target the anti-Trump dossier and former investigators who exchanged anti-Trump text messages.

The president has previously tried to assert that Mueller is conflicted, based on a claim that he turned him down for FBI director, his ties to fired bureau boss James Comey and other issues. Trump has long complained about the presence of Democratic donors on the Mueller team.

But Democratic lawmakers have warned Trump and his allies about encroaching on the Mueller probe’s independence.

In response to Wednesday's tweet, Rep. Adam Schiff, D-Calif., top intelligence committee Democrat, said, "This is an attempt to obstruct justice hiding in plain sight. America must never accept it."

After conservative House members unveiled a Rosenstein impeachment resolution, top House Democrats last week also noted that Mueller has already obtained over two-dozen indictments and said: “Any attempt to [take action against Mueller or Rosenstein] will be viewed by Congress and the American people as further proof of an effort to obstruct justice with severe consequences for Trump and his presidency.”

As Trump issued his call, Manafort’s trial, for tax and bank fraud charges unrelated to Russian meddling, was moving into full swing.

His defense team’s opening day strategy was to try and undermine the Mueller team’s star witness, Rick Gates, who was Manafort’s deputy in business and at the Trump campaign. The attorneys argued Gates was the one who transferred all the money into accounts, including consulting fees collected from Ukrainian political figures. They said he was embezzling money and later lied about it to investigators – before agreeing to flip and testify against Manafort.

But the Mueller team contends Manafort bankrolled a luxurious globe-trotting lifestyle with money he wasn’t paying taxes on.

Assistant U.S. Attorney Uzo Asonye told the jury Tuesday that Manafort considered himself above the law as he funneled tens of millions of dollars through offshore accounts to pay for personal expenses such as a $21,000 watch and a $15,000 jacket made of ostrich.

"Looking back on history, who was treated worse, Alfonse Capone, legendary mob boss, killer and “Public Enemy Number One,” or Paul Manafort, political operative & Reagan/Dole darling, now serving solitary confinement - although convicted of nothing? Where is the Russian Collusion?" Trump tweeted.

Fox News’ Peter Doocy, John Roberts, Brooke Singman and Gregg Re and The Associated Press contributed to this report.