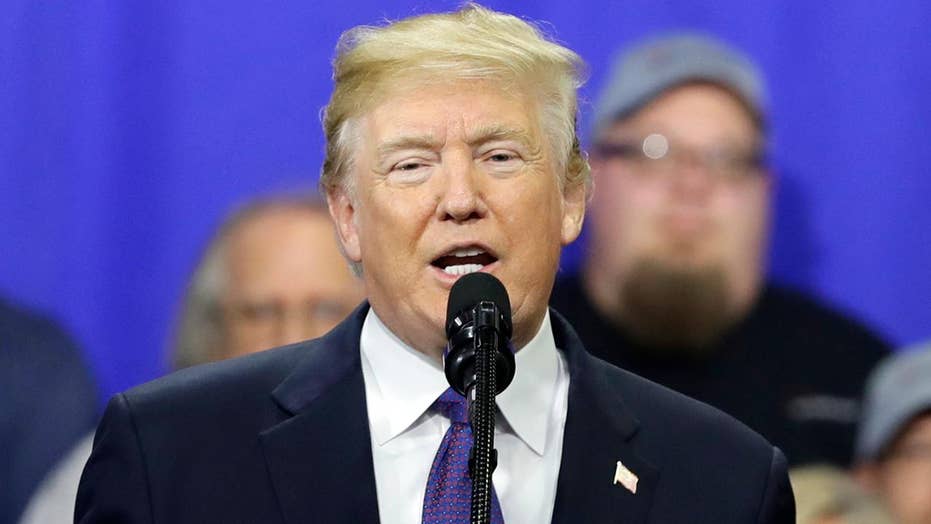 President Trump slams Democrats for not cheering positive economic news at the State of the Union: 'Can we call that treason? Why not?'

President Trump on Monday ripped into congressional Democrats who refused to applaud the “positive news” during his State of the Union address last week, calling their reaction “un-American” and accusing them of “bad energy” during the speech.

“They were like death and un-American,” Trump said during a speech in Ohio, as he promoted the sweeping tax reform law that Congress passed last year.

Trump added: “Somebody said ‘treasonous.’ I mean, yeah, I guess, why not? Can we call that treason? Why not?”

He again singled out House Democratic Leader Nancy Pelosi, lambasting her for comments earlier this month where she used the word “crumbs” to describe the bonuses workers have received tied to the tax law changes.

“I think this is not a good day for Nancy Pelosi,” Trump said. “She's our secret weapon…I just hope they don't change her.” 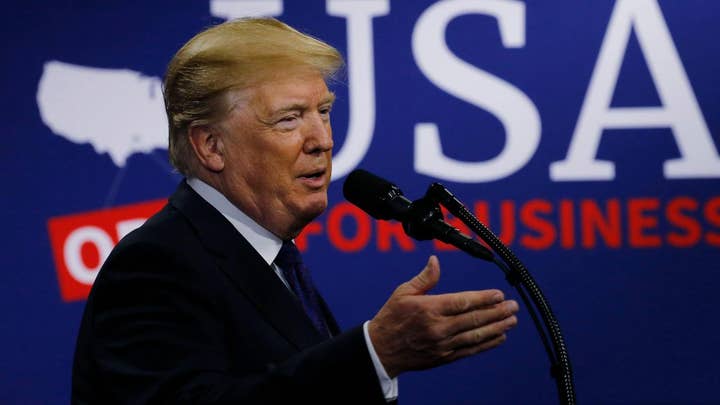 A spokesman for Pelosi, Drew Hammill, on Monday returned fire, accusing Republicans of “enriching their wealthy corporate donors at the expense of working families.”

“As the Dow nosedives on his watch, the president’s rambling, deceitful tax scam sales pitch reached an all-time low in Cincinnati,” Hammill said in a statement.

The Dow Jones industrial average on Monday plunged 1,175 points, or 4.6 percent, its biggest ever drop.

The president also celebrated the release of the House Intelligence Committee memo last week that cites testimony from a high-ranking government official who says the FBI and DOJ would not have sought surveillance warrants to spy on a Trump campaign adviser without the infamous, Democrat-funded anti-Trump dossier.

The memo has fueled accusations from Republicans of bias against Trump by top FBI and Justice Department officials.

He added: “They are very embarrassed. They never thought that they were going to get caught. We caught ‘em. Hey, we caught ‘em. Oh its so fun. We’re like the great sleuth.”

The president also mentioned how no football players were seen kneeling in protest during the national anthem during Sunday’s Super Bowl between the Philadelphia Eagles and the New England Patriots.

In the months leading up to the big game, some NFL players have been kneeling to protest police shootings of African-Americans – a move Trump has criticized as un-patriotic.

“We're saluting one great American flag,” Trump said. “And everybody stood up yesterday. There was nobody kneeling at the beginning of the Super Bowl! We've made a lot of improvements, haven't we? That's a big improvement!”

The theme of Trump’s speech was to promote stories of Americans who have received bonuses at work and higher paychecks because of the tax bill.

He asked several people in attendance to describe what they’d use the money for, including a worker who said he planned to start a family and buy a larger house.

“You are among more than three million Americans who have received a tax cut bonus because of the tax cuts that were just signed into law,” Trump said. “Everywhere I go, I love to hear what people plan to do with the money.”