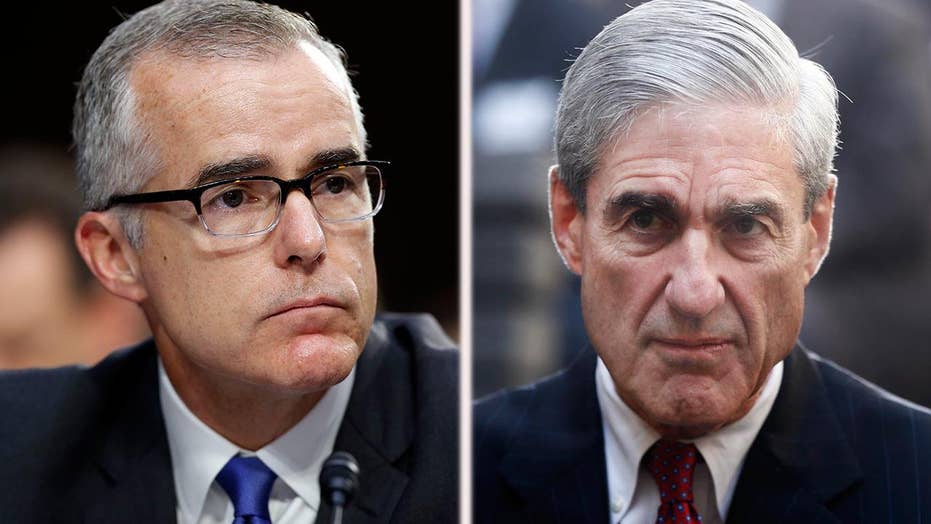 McCabe says his firing was an attack on the Mueller probe

President Trump escalated his criticism of the FBI and the Russia probe on Saturday, alleging “tremendous leaking, lying and corruption” from the bureau and other agencies and taking shots at fired former FBI Deputy Director Andrew McCabe and ex-Director James Comey.

The result: an equally fiery response from former intelligence officials.

McCabe was fired late Friday after an internal investigation found that he made an unauthorized leak to the media and “lacked candor” when speaking to investigators under oath. His firing came just days before he would have been eligible for a lifetime pension.

Sources told Fox News that the FBI’s Office of Professional Responsibility made the recommendation to fire McCabe. Sessions had the option to either accept the recommendation, or step in to stop the firing process.

President Trump quickly ramped up the the rhetoric over the termination, calling it a “great day for Democracy!"

He also skewered both McCabe and Comey, whom he accused of being sanctimonious and knowing “all about the lies and corruption going on at the highest levels of the FBI!”

On Saturday he followed up, saying that McCabe was “caught, called out and fired” and made reference to the funding of McCabe’s wife’s 2015 senatorial bid by a political action committee of then-Virginia Gov. Terry McAuliffe -- a close Hillary Clinton ally.

“How many lies? How many leaks? Comey knew it all, and much more!” the president tweeted.

The FBI has said McCabe received the necessary ethics approval about his wife's candidacy and was not supervising the Clinton investigation at the time.

On another front, Trump's personal lawyer, John Dowd, issued a statement Saturday morning calling on Deputy Attorney General Rod Rosenstein, who is overseeing FBI Special Counsel Robert Mueller’s inquiry into possible Russian meddling in the 2016 elections, to shut down the probe. His statement also took a swipe at Comey, who was fired by Trump back in May 2017.

“I pray that Acting Attorney General Rosenstein will follow the brilliant and courageous example of the FBI Office of Professional Responsibility and Attorney General Jeff Sessions and bring an end to alleged Russia Collusion investigation manufactured by McCabe’s boss James Comey based upon a fraudulent and corrupt Dossier,” he said in a statement to Fox News.

“Just end it on the merits in light of recent revelations,” he added.

While Dowd subsequently clarified that he was speaking in his personal capacity and not expressing Trump’s views, Trump appeared to give implicit support to the lawyer's thinking when he said that the House Intelligence Committee had concluded there was “no collusion between Russia and the Trump campaign” (In fact, only Republicans on the committee had reached that conclusion, the top Democrat on the committee, Adam Schiff noted in his own tweet on Saturday.)

“As many are now finding out, however, there was tremendous leaking, lying and corruption at the highest levels of the FBI, Justice & State,” Trump continued.

Carl Tobias, a law professor at the University of Richmond, told Fox News that Dowd's remarks seem like a new phase in the Trump team's attitude toward the Mueller probe.

"It also seems important that the timing coincides with McCabe’s firing, so we can probably expect that there will be increasing pressure on [Rosenstein] to end the Mueller inquiry, although McCabe’s actions were only tangentially related to Mueller’s work," he said.

FBI officials reacted angrily to the firing. McCabe described the termination  as part of an “ongoing war” against the FBI.

"This attack on my credibility is one part of a larger effort not just to slander me personally, but to taint the FBI, law enforcement, and intelligence professionals more generally," McCabe said.

Adding more intrigue, a source close to McCabe told Fox News Saturday that he kept memos memorializing his interactions with Trump, in a way that was very similar to the method Comey used to keep his own memos.

Comey also weighed in, in a Twitter posting that also hinted at his coming tell-all book: “A Higher Loyalty.”

“Mr. President, the American people will hear my story very soon,” he tweeted. “And they can judge for themselves who is honorable and who is not.”

Former CIA Director John Brennan, known for his outspoken criticisms of Trump, also weighed in -- blasting Trump in dramatic and colorful language and promising that “America will triumph over you.”

Democrats quickly backed those officials. Senate Minority Leader Chuck Schumer, D-NY, expressed concern about the state of the FBI investigation itself, saying Dowd’s statement show that the Trump team is looking to  “undermine [Mueller] at every turn."

"The president, the administration, and his legal team must not take any steps to curtail, interfere with, or end the special counsel's investigation or there will be severe consequences from both Democrats and Republicans," Schumer said in a statement.

Jumping into the fray, Sen. Patrick Leahy, D-Vt., called for the Senate Judiciary Committee to hold a hearing on "escalating politicized attacks" on the DOJ and FBI.

“During my four decades in the Senate, I have never before seen our nation’s career, apolitical law enforcement officials so personally and publicly maligned by politicians — indeed, by our President," he said in a statement. "And I have never been so concerned that the walls intended to protect the independence of our dedicated law enforcement professionals, including Special Counsel Mueller, are at risk of crumbling."

While the social media exchanges were especially intense earlier in the day on Saturday, Trump weighed in again on the issues associated with McCabe, and with the Mueller investigation, in the evening hours.

Shortly after 8 p.m. ET, he tweeted: "The Mueller probe should never have been started in that there was no collusion and there was no crime. It was based on fraudulent activities and a Fake Dossier paid for by Crooked Hillary and the DNC, and improperly used in FISA COURT for surveillance of my campaign. WITCH HUNT!"