EXCLUSIVE: President Trump has struck an “informal” deal with Boeing for new Air Force One planes, according to the White House -- resulting from negotiations that started before he took office.

“President Trump has reached an informal deal with Boeing on a fixed price contract for the new Air Force One Program. Thanks to the president’s negotiations, the contract will save the taxpayers more than $1.4 billion,” Deputy Press Secretary Hogan Gidley said Tuesday.

The deal is worth $3.9 billion. Officials say it represents $1.4 billion in savings from estimates of over $5 billion for two airplanes and related costs.

A Boeing official said the agreement covers two aircraft, “including things unique to Air Force One such as a communications suite, internal and external stairs, large galleys and other equipment.” 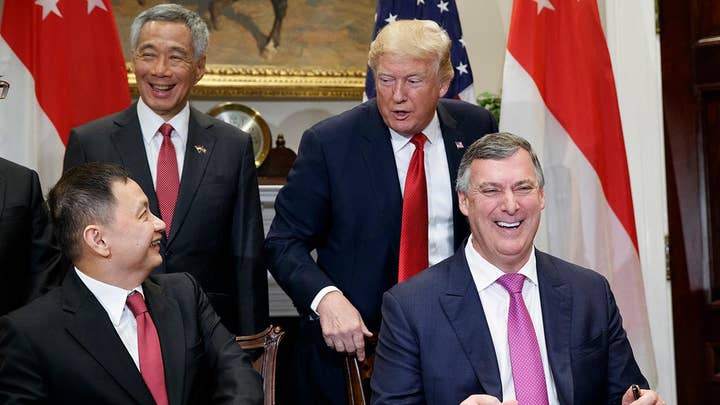 The company said in a statement: “Boeing is proud to build the next generation of Air Force One, providing American Presidents with a flying White House at outstanding value to taxpayers. President Trump negotiated a good deal on behalf of the American people.”

The president has been working to negotiate a new Air Force One deal ever since the presidential transition period in late 2016, when he complained on Twitter about the cost of the Boeing project and threatened to cancel the order.

He said at the time the costs were “out of control.”

The original projected price of the contract was $3 billion, but costs kept rising. When Trump objected in late 2016, he complained that costs were creeping past $4 billion.

Now, the White House says the costs would have been over $5 billion. According to an official with knowledge of the program, though, the total cost estimate was always over $5 billion -- the official explained that Trump simply “was given bad information in 2016” when he tweeted that the cost was $4 billion.

The planes are meant to replace the aging Reagan-era aircraft currently in use.

“I think Boeing is doing a little bit of a number. We want Boeing to make a lot of money, but not that much money,” Trump said in December 2016.

Defense One reported last week that Trump was in the final stages of negotiating the deal for two new airplanes, and met with Boeing CEO Dennis Muilenburg at the White House.

The negotiations covered the overhaul of two 747 airliners.