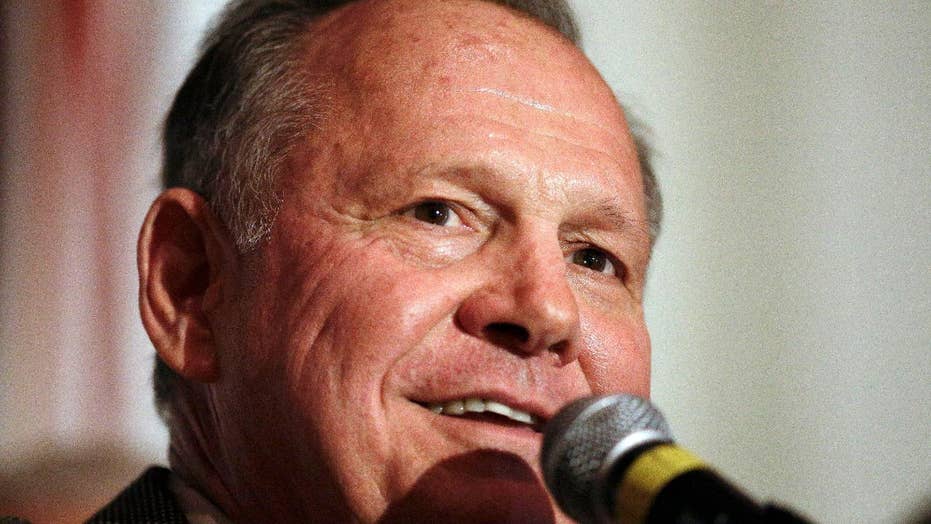 Four women have accused Moore of perusing them when they were teenagers.

President Trump is deflecting questions about whether Alabama GOP Senate nominee Roy Moore should quit the race amid sexual-misconduct allegations, in a contest that has divided the Republican Party.

Trump, who has been traveling in Asia over the past week, said Saturday that he's been too busy reading documents and hasn't had time to catch up on television news coverage about Moore.

"So I have not seen very much about him, about it," Trump told reporters flying with him on Air Force One from Danang to Hanoi, in Vietnam. “I haven’t been able to devote very much time to it.”

Trump also referred to a written statement that White House press secretary Sarah Huckabee Sanders read to reporters after The Washington Post reported that an Alabama woman said Moore had sexual contact with her when she was 14 and he was a 32-year-old assistant district attorney.

The White House statement said Trump believes Moore will "do the right thing and step aside" if the decades-old allegations are true.

Bannon said Friday night, after The Post story about Moore, “I think you’re going to find in the mainstream media, either tonight or tomorrow … some pretty interesting stories about how that information got dropped and who paid for it and who weaponized it.

He added: "Is it just a coincidence that the Bezos Amazon Washington Post did the Billy Bush hit? And they did the hit on Judge Moore."

Moore denied the allegation, saying Friday during an interview with conservative radio host Sean Hannity that the alleged encounter with the 14-year-old female "never happened."

On Saturday, in Moore’s first public appearance since the allegations were reported, he again denied the sexual misconduct and that he supplied alcohol to an alleged teen victim.

“Why now?” Moore asked about the roughly 40-year-old allegations. “The Democrats know the importance of this election. They see it a prelude to the 2018 races. … They are desperate. This is a prime example of fake news.”

Three other women also told the Post that Moore had sexual contact with them when they were teenagers.

Asked when he would decide whether Moore did what he has been accused of, given that four women have come forward, Trump said: "Honestly, I'd have to look at it and I have to see."

The allegations have sparked a wave of concern among GOP officials in Washington who are anxious about their slim majority in the Senate. But they have produced little more than a collective shrug from many Republicans in Alabama, which holds a special General Election on Dec. 12 to fill the Sessions seat.

Trump, who won the White House on a campaign critical of the Republican establishment in Washington, has nevertheless pledged to campaign for Moore.

McConnell, R-Ky., and other GOP senators have said Moore should step aside if the reports are true.

In addition, the National Republican Senatorial Committee, the GOP’s Senate campaign group, on Friday ended its fundraising agreement with Moore.

Trump suggested this weekend that he would have more to say on the matter after he returns to the White House next week.

"I'll stick with my statement for now," he said. "But I'll have further comment as we go down the road. I have to get back into the country to see what's happening."