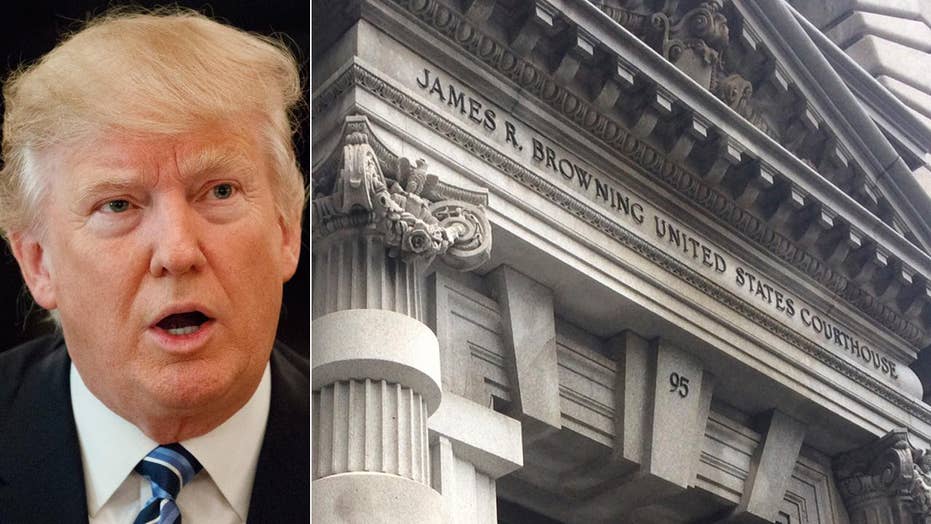 The appellate court refuses to reinstate the president's executive order

President Trump got to work early Friday picking apart a federal court’s decision not to reinstate his controversial travel ban, noting that the detailed 29-page order did not include one mention of the statute he claims gives him broad authority on immigration.

“A disgraceful decision!” Trump tweeted, while quoting an analyst who flagged the omission in a Lawfare blog post.

The writer, Brookings fellow and Lawfare editor-in-chief Benjamin Wittes, had noted the order skipped over a key part of the U.S. code on “inadmissible aliens” which Trump had publicly recited on Wednesday in defense of his immigration restrictions.

Wittes wrote that this statute speaks to one of two “big questions” on which the case will turn.

He said the statute indeed gives Trump “sweeping power” to restrict entry, writing: “Remarkably, in the entire opinion, the panel did not bother even to cite this statute, which forms the principal statutory basis for the executive order (see Sections 3(c), 5(c), and 5(d) of the order). That’s a pretty big omission over 29 pages, including several pages devoted to determining the government’s likelihood of success on the merits of the case.”

The Trump administration has pointed to that statute for days in defending the controversial move to suspend refugee admissions as well as travel and immigration from seven mostly Muslim countries.

A three-judge panel of the 9th Circuit Court of Appeals, though, declined to lift a lower-court ruling that suspended the policy on other grounds.

In their unanimous decision, the judges generally referred to the government’s position that such presidential decisions on immigration policy are “unreviewable” – but rejected that argument.

“There is no precedent to support this claimed unreviewability, which runs contrary to the fundamental structure of our constitutional democracy,” the judges wrote. “…Although our jurisprudence has long counseled deference to the political branches on matters of immigration and national security, neither the Supreme Court nor our court has ever held that courts lack the authority to review executive action in those arenas for compliance with the Constitution.”

The ruling did address what Wittes said was the other “big” question at play: How statements from the president and his campaign team could “render an otherwise valid exercise of this power invalid.”

This aspect pertains to past statements by Trump and his advisers that they were looking at ways to suspend immigration to the U.S. for Muslims. While the administration now insists this is not a “Muslim” ban, the states challenging the order say it violates the establishment and equal protection clauses of the Constitution because it was meant to target Muslims – pointing to the president’s past statements and other factors.

The Justice Department is now reviewing its options -- which include the possibility of appealing the matter to the Supreme Court, asking for a review from a broader panel of judges or taking the dispute back to the lower court. Or the White House could issue a revised order.

Trump tweeted overnight, “SEE YOU IN COURT,” without specifying which court.

Wittes argued that the 9th Circuit was right to leave the restraining order in place, “for the simple reason that there is no cause to plunge the country into turmoil again while the courts address the merits of these matters over the next few weeks.”

Before the measure was put on hold, Trump’s order caused chaos at airports amid confusion over which travelers were affected. Green-card holders initially were thought to be included in the freeze, though the Homeland Security Department later made clear they were exempt.

Wittes cautioned in his post that the fight over the merits is different than the battle that just played out in San Francisco: “Eventually, the court has to confront the clash between a broad delegation of power to the President—a delegation which gives him a lot of authority to do a lot of not-nice stuff to refugees and visa holders—in a context in which judges normally defer to the president, and the incompetent malevolence with which this order was promulgated.”