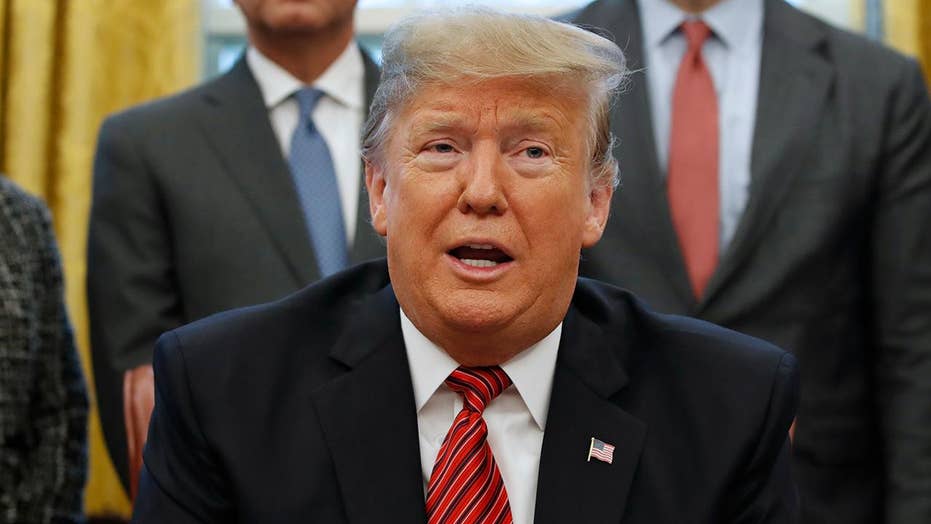 President Trump: I have the absolute right to declare a national emergency if we can't make a deal on the border wall

Speaking to reporters in the Oval Office after signing the anti-human trafficking bill, President Trump says that America will never have border security without the wall.

President Trump said Wednesday he has the “absolute right” to call a national emergency over border security, suggesting he could take the controversial step if all sides are unable to strike a deal to secure the border and reopen shuttered federal agencies.

The president notably did not declare a national emergency in his prime-time address from the Oval Office Tuesday night, in which he made his case for a border wall in the face of a humanitarian "crisis" in the region.

But the president has publicly suggested he could bypass Congress if necessary to pursue a wall and made clear Wednesday he's keeping the option in his pocket. He said he has not made the declaration to date because he has faith in a potential bipartisan agreement.

TRUMP, IN FIRST-EVER PRIME-TIME OVAL OFFICE ADDRESS, LAMENTS 'CRISIS OF THE HEART AND CRISIS OF THE SOUL' AT BORDER

“I think we might make a deal,” Trump said during a bill-signing ceremony in the Oval Office Wednesday. The president is slated to meet again with congressional Republicans and Democrats at the White House Wednesday afternoon.

“I have the absolute right to do a national emergency if I want,” he added. “I think something will happen. I really do. Otherwise, we will have to go about it in a different manner.”

An emergency declaration would be almost certain to face immediate legal challenges and could bog down his wall push in the courts for months or years. But the option could be considered yet another negotiating tool, in addition to the pressure over the partial government shutdown that began nearly three weeks ago. Despite that pressure, however, both sides have made little progress toward a resolution, with Trump demanding nearly $6 billion for a wall and Democrats saying the shutdown must end before dealing with border security issues.

Vice President Pence this week said that the White House Counsel’s office has been looking into the legality of Trump declaring a state of emergency to authorize the construction of the border wall without approval from Congress.

AS TRUMP HEADS TO BORDER, DEMS DOUBLE DOWN ON 'MANUFACTURED CRISIS' CLAIM

The president’s comments come on day 19 of the partial federal government shutdown, which has forced hundreds of thousands of federal workers and contractors to work without pay, or simply stay home. Numerous government agencies first ran out of funding on Dec. 22, as Democrats vowed to block Trump’s requested $5.7 billion to build the border wall.

In his Tuesday night address, the president reiterated his multi-billion dollar request for a physical border barrier.

“To those who refuse to compromise in the name of border security, I would ask: imagine if it was your child, your husband, or your wife, whose life was so cruelly shattered and totally broken?” Trump asked, referring to the “dozens of families” he has met “whose loved ones were stolen by illegal immigration.”

After his address, Senate Minority Leader Chuck Schumer, D-N.Y., and House Speaker Nancy Pelosi, D-Calif., offered a joint-response. The two congressional leaders condemned Trump’s rhetoric and what they called his “obsession” with building the border wall.

Democratic leaders are also doubling down on accusations that the president has “manufactured” a humanitarian crisis at the border.

“President Trump must stop holding the American people hostage, must top manufacturing a crisis, and must re-open the government,” Pelosi said.

Last week, House Democrats passed a bill to fund the Department of Homeland Security, which oversees construction of the wall, at current levels through Feb. 8, with $1.3 billion for border security—a figure far less than Trump requested. Senate Republicans so far have not taken it up.

The president told congressional Democratic leaders during a meeting last week that he was willing to keep the government shut down for as long as necessary -- possibly months or even years -- in order to get the funding he wants.

Trump plans to travel Thursday to the front-lines, visiting the U.S.-Mexico border by McAllen, Texas.