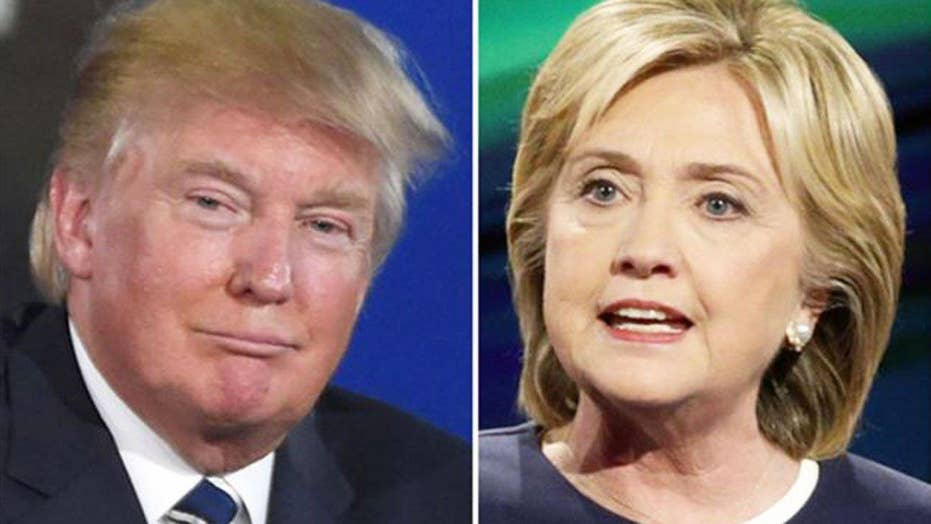 Republican presidential candidate Donald Trump stepped up his personal attacks on Democratic opponent Hillary Clinton Saturday night, telling supporters in Pennsylvania that Clinton "should be in prison" over her use of a private email server while secretary of state.

Trump made the apparently unscripted statement as chants of "Lock her up!" rang out at the rally in Manheim, Pa. Trump himself has avoided using such language in the past. But this time, he joined in.

The real estate mogul also made an apparent reference to former President Bill Clinton's sexual indiscretions, saying that Hillary Clinton's "only loyalty is to her financial contributors and to herself."

"Hillary was an enabler," Trump told the paper. "And she attacked the women who Bill Clinton mistreated afterward. I think it's a serious problem for them, and it's something that I'm considering talking about more in the near future."

When asked by The Times about his affair with Marla Maples while married to his first wife, Ivana during the late 1980s, Trump said "I wasn't president of the United States. ... I don't talk about it."

Rattling off a list of world problems, Trump told the audience, "She's supposed to fight all of these things and she can’t make it 15 feet to her car. Give me a break." At that point, Trump imitated Clinton's stumble that was recorded by a bystander as she tried to leave the event.

"Folks, we need stamina, we need energy, we need people who are going to turn deals around."

For the second straight evening, Trump questioned the integrity of the nation's voting system, recalling his warning earlier this summer that the election result would be "rigged".

"You gotta get out, get your friends, go watch your polling booth," Trump said Saturday. "I’ve seen too many bad stories especially here in Pennsylvania.

"We can't lose an election because of, you know what I'm talking about," the real estate mogul added. "A lot of bad things happen. I don't want to lose for that reason."

Trump spoke hours before The New York Times reported that it had obtained documents showing that Trump had claimed a $916 million loss on his 1995 tax returns, an amount so large it may have allowed him to avoid paying income tax for 18 years.

Clinton campaign press secretary Brian Fallon called Trump's rally remarks unhinged in a Twitter post and speculated that they were an effort to distract from the Times report.