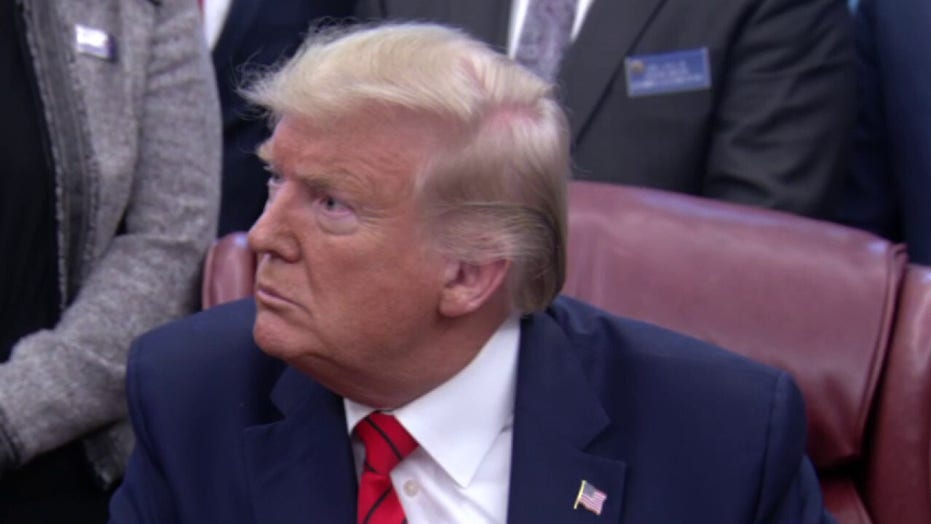 Trump: I'd rather run against Bloomberg than Bernie Sanders

President Trump delivers remarks on impeachment and the 2020 race ahead of the New Hampshire primary.

Newly acquitted President Trump railed against his impeachment Tuesday at the White House and singled out the lone Republican who found him guilty, Sen. Mitt Romney.

“Romney’s a disgrace for voting against, he’s a disgrace,” Trump said in the Oval Office, as he aired his grievances against those who helped launch the inquiry.

Romney, citing his faith and the facts of the case, found Trump guilty on one count of impeachment -- abuse of power-- and not guilty on obstruction of Congress. But since the Utah senator made an emotional speech on the Senate floor explaining his vote, he’s been ostracized by Trump and his closest supporters.

Trump took a victory lap last week after the Senate voted to acquit him on Wednesday. But the commander-in-chief made clear he’s not forgiving those who put him in the spot of impeachment.

He bashed the lead impeachment manager, Rep. Adam Schiff, D-Calif., as a “sick person" and a “corrupt politician.” He defended his decision to boot Lt. Col. Alexander Vindman from his detail at the National Security Council for testifying against him in the impeachment inquiry.

At the heart of the impeachment inquiry was Trump’s July 25 phone call with the president of Ukraine when he asked him to investigate Joe and Hunter Biden.

“I will always call it a perfect call,” Trump said Tuesday. Vindman listened to the call and reported his concerns to National Security Council attorneys, believing it “inappropriate.”

Democrats have blasted the unshackled Trump for ousting Vindman, his brother Eugene and Ambassador Gordon Sondland, who testified there was a quid pro quo.

“This is a textbook case of witness retaliation. Not only is the retaliation against Lt. Col. Vindman, the anonymous whistleblower, and others like them shameful, it is also illegal,” Democratic Leader Sen. Chuck Schumer of New York said Monday. “It is illegal. All federal employees have the legal right to make protected disclosures to Congress and to Inspectors General anonymously and free from reprisals.”

Meanwhile, Romney spent part of the weekend in Palm Beach, Fla., for a fundraiser for Senate Republicans and signaled he wants to be a team player. He told reporters Tuesday there wasn’t any awkwardness at the retreat or with his fellow senators, but he faced more confrontations at home in Utah, the Washington Post reported.

“I’m sure people have different points of view, that’s what we’re entitled to do in a democracy,” Romney said Tuesday.