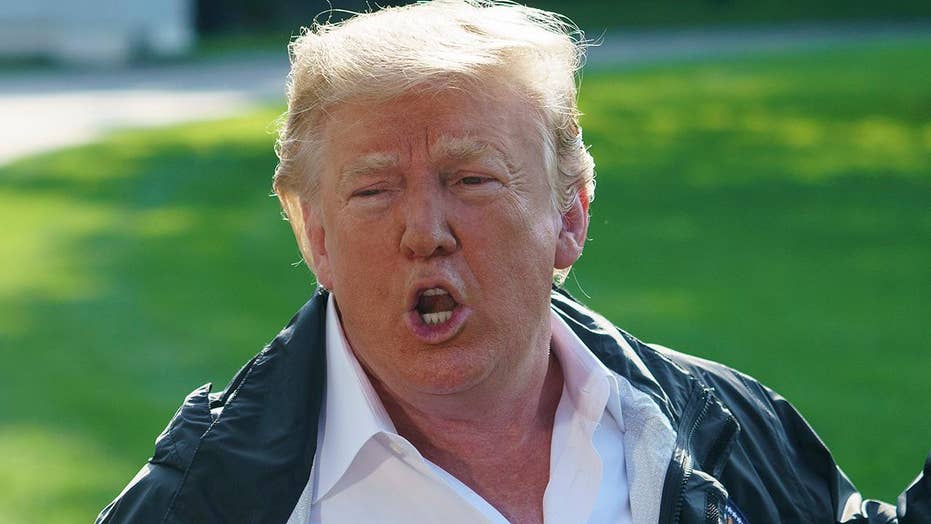 President Trump speaks to reporters before leaving for North Carolina.

President Trump tore into Jeff Sessions in an interview published Wednesday, going so far as to say “I don’t have an attorney general” -- although he appeared to later soften the statement.

In an interview with The Hill, Trump said the beleagured Sessions was absent and performing poorly in his role as the nation’s top lawyer.

“I don’t have an attorney general. It’s very sad,” he said.

Trump’s relationship has long been strained with Sessions since the former Alabama senator recused himself from the Russia investigation in early 2017.

While Sessions was the first senator to back Trump, and has been central in passing key planks of Trump’s agenda -- particularly on border enforcement and law and order -- Trump has repeatedly slammed him publicly.

In the latest interview, Trump said his frustration extends beyond the Russia recusal.

Trump went on to say that Sessions “did very poorly” and “was mixed up and confused” during his confirmation hearing. But Trump also returned back to slamming Sessions on his decision to recuse himself -- which Sessions said was required by DOJ regulations due to his participation in the Trump campaign.

GREGG JARRETT: AG SESSIONS 'WILL BE FIRED' AFTER MIDTERMS DUE TO CARTER PAGE SURVEILLANCE

“He gets in and probably because of the experience that he had going through the nominating when somebody asked him the first question about Hillary Clinton or something he said ‘I recuse myself, I recuse myself,’" Trump said.

On Wednesday, Trump was asked about the interview by reporters at the White House, and said he was "disappointed" with Sessions -- although he seemed to walk back his earlier remarks.

Trump has in the past indicated that he intends to fire Sessions. In August he tweeted a quote from Sen. Lindsey Graham, R-S.C., who said on “Fox News @ Night” that the AG serves “at the pleasure of the President.”

“Every President deserves an Attorney General they have confidence in,” Graham said. “I believe every President has a right to their Cabinet, these are not lifetime appointments. You serve at the pleasure of the President.”

But Trump has not indicated that such a move is imminent, and he could struggle to get a replacement through the Senate depending on what happens in the November midterms.

In August, Trump said in an interview with Fox & Friends that Sessions had “never taken control” of his department.

“But when everybody sees what’s going on in the Justice Department -- I always put ‘justice’ now with quotes -- it’s a very, very sad day. Jeff Sessions recused himself, which he shouldn’t have done. Or he should have told me,” Trump said.

“Even my enemies say that Jeff Sessions should have told you that he was going to recuse himself and then you wouldn’t have put him in. He took the job and then he said I’m going to recuse myself. I said, ‘what kind of a man is this?’” he said.

Sessions later hit back in a written statement.

“I took control of the Department of Justice the day I was sworn in, which is why we have had unprecedented success at effectuating the President’s agenda—one that protects the safety and security rights of the American people, reduces violent crime, enforces our immigration laws, promotes economic growth, and advances religious liberty.”

He went on to say, “While I am Attorney General, the actions of the Department of Justice will not be improperly influenced by political considerations.