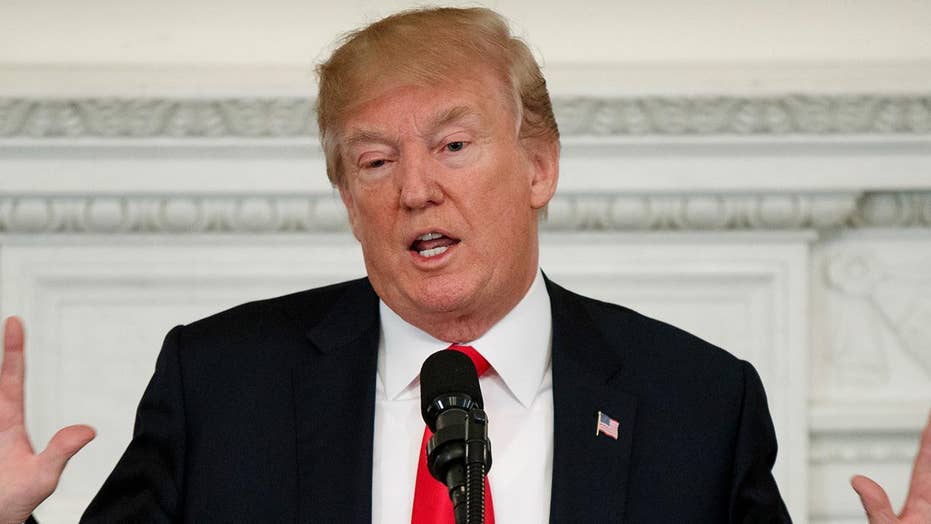 Trump: I believe I would run into school shooting situation

President Donald Trump calls actions of some deputies during Parkland, Florida shooting 'disgusting' adding he believes he would've ran into active shooting scenario even if he didn't have a weapon.

President Trump on Monday slammed the “disgusting” law enforcement officers who failed to rush into the Florida high school earlier this month as a gunman slaughtered students and teachers inside, claiming he would have entered the school himself even without a firearm to stop the attacker.

“You don't know until you test it,” Trump said during a meeting with governors. “But I really believe I’d run in there even if I didn't have a weapon.”

He added: “I think most of the people in this room would have done that too because I know most of you.”

Speaking of the deputies who stayed outside, Trump said: “The way they performed was really a disgrace.”

Broward deputy Scot Peterson resigned after it was revealed he chose not to enter the school during the Valentine’s Day shooting. Local news outlets in Florida also reported that at least three Broward deputies, including Peterson, waited outside during the shooting.

Meanwhile, a lawyer for the Florida deputy who resigned after it emerged he didn't enter Marjory Stoneman Douglas High School during the mass shooting said Monday that Peterson is not "a coward" and acted appropriately.

ATTORNEY: FLORIDA DEPUTY WHO DIDN'T ENTER SCHOOL DURING MASS SHOOTING IS NOT 'A COWARD'

"Let there be no mistake, Mr. Peterson wishes that he could have prevented the untimely passing of the seventeen victims on that day, and his heart goes out to the families of the victims in their time of need," lawyer Joseph DiRuzzo said in a statement. "However, the allegations that Mr. Peterson was a coward and that his performance, under the circumstances, failed to meet the standards of police officers are patently untrue."

During remarks to the governors, the president renewed his pledge to outlaw the “bump stock” modifier used in the Las Vegas massacre, strengthen background checks and increase armed security at schools. Trump said he had lunch recently with top National Rifle Association officials Wayne LaPierre and Chris Cox, and said “they want to do something.”

“Don’t worry about the NRA, they are on our side,” Trump said. “You guys – half of you are so afraid of the NRA. There is nothing to be afraid of. And you know what, if they're not with you, we have to fight them every once in a while, that's okay. They are doing what they think is right.”

Trump has been pushing some new gun restrictions in the wake of this month’s school shooting in Parkland, Fla., that killed 17 people,

“We are writing out bump stocks,” Trump said Monday. “But we have to take steps to harden our schools so they are less vulnerable to attack.”

The president said, “This includes allowing well-trained and certified school personnel to carry concealed firearms. At some point, you need volume. I don't know that a school is going to be able to hire a hundred security guards.”

During the meeting, the president allowed various governors to suggest “ideas” for stopping gun violence in schools. One Democratic governor, Jay Inslee of Washington state, took issue with the president’s suggestion that some teachers should be armed.

“I just suggest we need a little less tweeting here, a little more listening and let's just take that off the table and move forward,” Inslee said.

“This is a pool of folks we can immediately put out without having to spend a great amount of dollars in keeping our schools and our school personnel safe," she said.