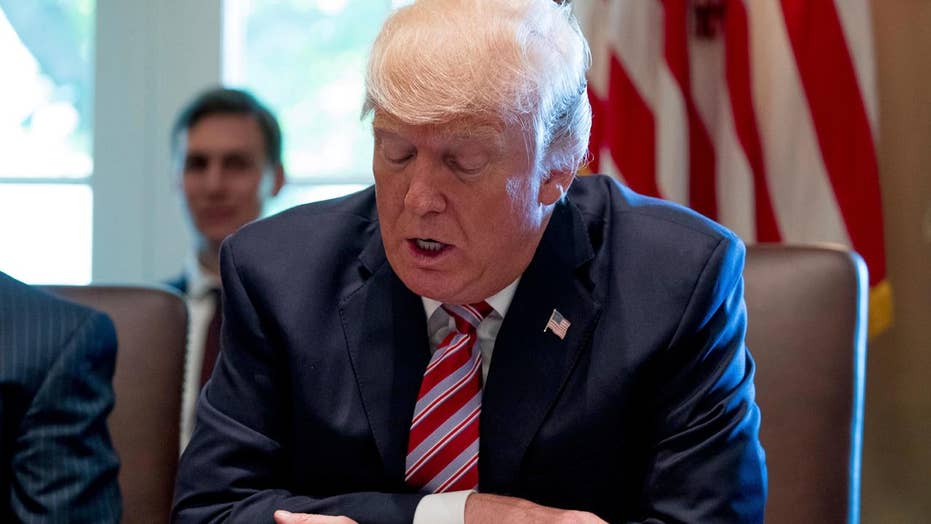 President Trump is reviving his effort to overhaul ObamaCare and reverse what he describes as the “death spiral,” as fresh figures show premiums soaring and the number of counties growing where there will soon be no insurance option under the program.

While Attorney General Jeff Sessions testified on the Russia probe Tuesday afternoon, Trump headed to Milwaukee to discuss the health care push and meet with so-called “victims” of the Affordable Care Act’s problems.

"Millions of American families, and I mean millions, continue to suffer from Obamacare while congressional Democrats obstruct our efforts to rescue them," said Trump. "The Democrats have let you down, big-league ... These citizens deserve so much better."

Before that, the president met with numerous Republican senators to discuss the status of repealing and replacing the law.

Trump set the stage for the meeting in a Tuesday morning tweet: “2 million more people just dropped out of ObamaCare. It is in a death spiral. Obstructionist Democrats gave up, have no answer = resist!”

But so far, the victory Trump celebrated when ObamaCare repeal legislation passed the House has not come close to being replicated on the Senate side. The pressure is on Senate Republicans to try and move a bill before the Fourth of July recess, and it’s unclear where discussions stand.

Yet the problem of rising premiums and fleeing insurers hasn’t gone away.

According to a White House official, individual market premiums more than doubled from 2013 to 2017. Applying pressure to Republican senators, the official noted that several states represented by those in Tuesday’s meeting saw premium increases well over 100 percent.

Anthem became one of the latest to announce a market pull-out, declaring it would leave Ohio in 2018. Earlier this year, Humana announced it will pull out of the ObamaCare exchanges entirely.

In legislative discussions in the Senate, one of the big problems for Republicans is the Medicaid expansion. Moderates wants the expansion to be phased out in seven years; Senate Majority Leader Mitch McConnell, R-Ky., has offered three years. The talks are delicate because with 52 Senate Republicans, McConnell can only afford to lose two of his members to pass a bill.

A key Senate Republican voiced confidence in McConnell over the weekend but also floated a backup.

As for Senate Democrats, they’ve talked about fixing ObamaCare but don’t sound willing to work with Republicans if the focus is on scrapping the health care law.

"We may be days or even weeks away from the Republicans moving directly to the floor a significant bill that would affect tens of millions, even hundreds of millions of Americans -- give big tax cuts, cut back on health care, defund Planned Parenthood without a single public hearing,” Sen. Chris Coons, D-Del., told CNN. “That's also wrong."