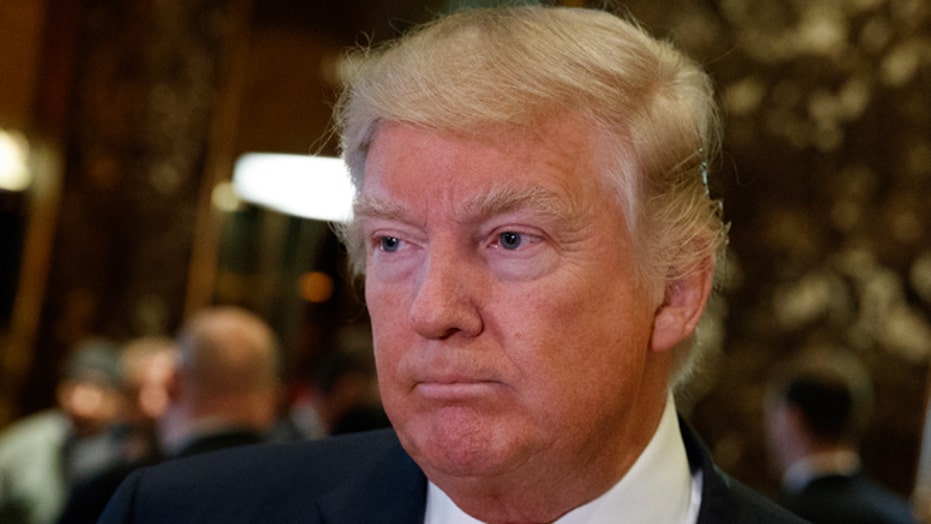 Strategy Room: Christopher Hale and Liz Peek weigh in about President-Elect Donald Trump's possible priorities once in the White House

President-elect Donald Trump has a busy Inauguration Day ahead of him -- in between the oath of office and the inaugural balls, he's pledged to take some “big league” actions as part of a Day One agenda that will set the tone for his presidency.

Incoming presidents often set sights high for their first day in office, with mixed results. President Obama promised to shut down Guantanamo Bay at the start of his presidency; yet the detention center remains open, albeit with far fewer inmates.

What Trump says he'll do -- and actually achieves -- likewise could differ. But here's an overview of what Trump may have in store for his first day.

Trump’s presidential campaign centered on illegal immigration. It is perhaps not surprising many of his “Day One” promises fall under the immigration banner.

During the campaign, he outlined a series of steps he could take immediately, largely using executive power.

He repeatedly promised to “eliminate every unconstitutional executive order” -- referring specifically to Deferred Action for Childhood Arrivals (DACA) and Deferred Action for Parents of Americans (DAPA), which granted legal status to illegal immigrants brought to the U.S. as children, or who have children who are citizens or legal residents.

Additionally, he has pledged to suspend immigration from terror-prone regions where vetting cannot be properly done. And he's vowed to instruct the State Department to “immediately suspend the Syrian refugee resettlement program” and develop a plan for a safe zone in the region.

Trump also says he intends to ask Congress to pass “Kate’s Law” – after Kate Steinle, who was killed in 2015 by an illegal immigrant – to ensure criminal aliens convicted of illegal reentry receive “strong mandatory minimum sentences.” In a speech in Gettysburg, Pa., in October, he promised to yank federal funding from so-called “sanctuary cities” on his first day.

In a transition video in November, he also pledged to direct the Department of Labor to investigate “all abuses of visa programs that undercut the American worker” on his first day in office.

His most famous campaign promise -- a wall on the southern border -- also has been supposedly slated for Day One action. In a speech in September in Phoenix, Ariz., Trump said on his first day, “we will begin working on an impenetrable, physical, tall, power, beautiful southern border wall.” Though Trump still is vowing to build the wall, it's unclear what he could actually do on the first day.

He also promised the U.S. will begin deporting the approximately 2 million criminal illegal immigrants in the country -- though here, too, it's unclear what he could do on his first day.

“Day one, my first hour in office, those people are gone,” he said.

Trump’s website says he will “ask Congress to immediately deliver a full repeal of ObamaCare” on Day One.

To an extent, Congress has already started, taking the first procedural step this week to set the stage for a repeal/replace vote. However, it will almost certainly be well after Jan. 20 before Congress can deliver on a "full repeal."

Trump said at his Wednesday news conference they'll bring out a full plan to replace and replace the law after his HHS nominee is approved.

In a September speech in Greenville, S.C., Trump said he intends to “direct every agency in government to begin identifying all wasteful job-killing regulations” on his first day.

He also has said he intends to “allow vital energy infrastructure projects, like the Keystone Pipeline, to move forward."

Trump has further promised to issue an immediate notification that his administration intends to withdraw from the Trans-Pacific Partnership. He has said he will also inform NAFTA partners of his intention to renegotiate that deal.

As for other deals, he has promised to “cancel billions in payments to U.N. climate change programs and use the money to fix America’s water and environmental infrastructure.”

He also vowed in his November transition video that he will “formulate a rule that says for every new regulation, two old regulations must be eliminated.”

Trump says he will convene a Day One meeting of his generals and instruct them to submit a plan for defeating ISIS within 30 days.

In his November video, he said he will ask the Department of Defense and the Chairman of the Joint Chiefs of Staff to develop a comprehensive plan to defend American infrastructure from cyber attacks “and all other attacks.”

Backing up his tough rhetoric on China, he has vowed to declare the country a currency manipulator on Day One as well.

As part of his plan to "drain the swamp," he laid out a first day plan in Gettysburg, Pa., in October in which he said he wants to:

In addition to these actions, at a rally last January he promised to get rid of gun-free zones, though it is far from clear how he would do this.

All told, Trump’s first-day pledges go down as some of the most ambitious for a president-elect. How many of these he will be able to do on Jan. 20 -- as opposed to later in his first 100 days and beyond -- remains to be seen.

As Trump has said: “It’s going to be a very busy first day.”