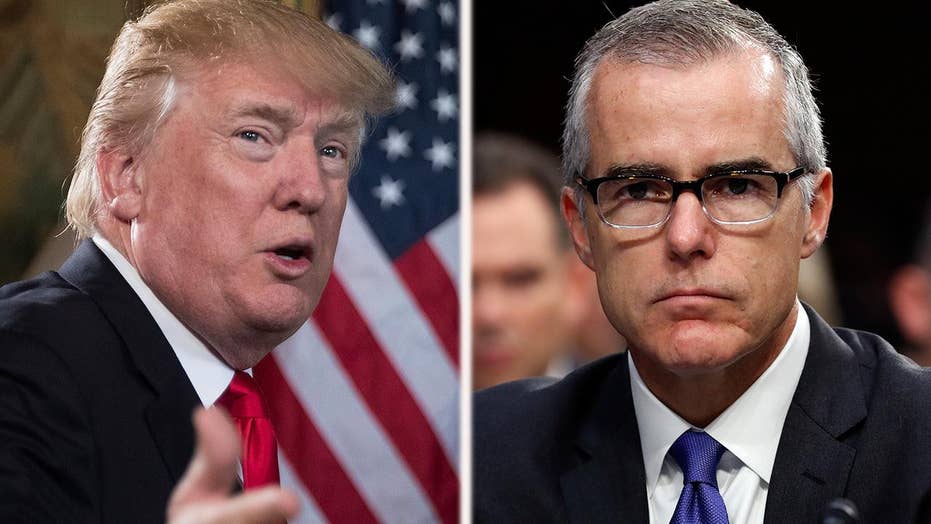 President takes to Twitter after report the FBI deputy director will retire in 2018.

".@FoxNews-FBI’s Andrew McCabe, 'in addition to his wife getting all of this money from M (Clinton Puppet), he was using, allegedly, his FBI Official Email Account to promote her campaign. You obviously cannot do this. These were the people who were investigating Hillary Clinton,'" Trump tweeted, quoting Fox News' Ed Henry.

Trump has long been critical of the FBI and McCabe, who participated in the agency’s investigation into Hillary Clinton’s use of private email servers while secretary of state. The president has ramped up his criticism since McCabe announced this weekend that he would retire in 2018.

He also tweeted earlier in the day: "How can FBI Deputy Director Andrew McCabe, the man in charge, along with leakin’ James Comey, of the Phony Hillary Clinton investigation (including her 33,000 illegally deleted emails) be given $700,000 for wife’s campaign by Clinton Puppets during investigation?"

Henry said Sunday morning on "Fox & Friends": "Andrew McCabe, in addition to his wife getting all this money from McAuliffe in this race, he was using, allegedly, his FBI official email account to promote her campaign. You obviously cannot do that, and these were the people who were investigating Hillary Clinton."

McCabe’s wife, Jill, received roughly $675,000 from McAuliffe’s PAC Common Good VA and the Virginia Democratic Party, according to FactCheck.org. The group reported that McCabe was at the time running the FBI’s Washington, D.C., bureau that was assisting with the Clinton email probe and that he didn’t become deputy director until after his wife lost her bid.