What can we expect from the final presidential debate?

President Trump on Monday predicted said he is “going to win” on Nov. 3, saying the campaign has “never been in a stronger position."

“I wouldn’t have told you that two or three weeks ago," Trump said. "I am more excited today than I was two weeks ago.”

He added: “Two weeks ago, I was in the hospital, and people were shocked that I came out so fast and so healthy — it’s not the easiest thing to do, folks.”

Earlier this month, the president tested positive for the novel coronavirus and was hospitalized at Walter Reed National Military Medical Center for several days, and finished his recovery and therapeutics at the White House.

“Ladies and gentleman, young women and young men, you have a great future,” Trump said. “I am very happy, this is the day of both campaigns that I feel the best about winning. Because we’re winning in many states.”

The president touted his performance in North Carolina, Pennsylvania, Ohio and Iowa, and said he has “a really good shot in New Hampshire.” The president also said his campaign is “leading in Michigan with early votes,” calling it “unheard of.”

The president also said he believes he can win in New Mexico and Minnesota, which he called “non-traditional” states for Republicans.

“We’ll run up the coast — we’re going to get Florida, South Carolina, Georgia — we’re doing very, very well,” Trump said. “We are in the best shape we’ve ever been in.”

A campaign official, during the call, added that the Trump campaign’s “internal polling shows the team has a clear pathway to victory with 15 days until Election Day.”

The official added that Trump "is a closer," and added that "history sure seems to be begging to repeat itself."

Trump campaign manager Bill Stepien said that the team's "trend line is strong," while touting the campaign's grassroots efforts and ground game in key states across the nation.

Stepien went on to claim that Democrats "are simply not getting the returns" they expected in absentee and early voting.

The president said that “if an election were held today, we win the election.”

“We have states that are tippy, can go either way — I have the ability to go to those states and rally — Biden doesn’t have that ability,” Trump said, adding that his Democratic opponent has “no enthusiasm.”

Despite the campaign's confidence, according to the RealClearPolitics avergae on Monday, Biden was leading with 51.3%  to Trump's 42.4%.

The president then shifted and slammed Biden, referring to the latest stories about his son Hunter Biden’s business dealings, and the former vice president’s alleged knowledge of those dealings.

Trump said the former vice president “should be in jail,” calling him a “criminal,” and Hunter Biden’s laptop “a criminal enterprise.” 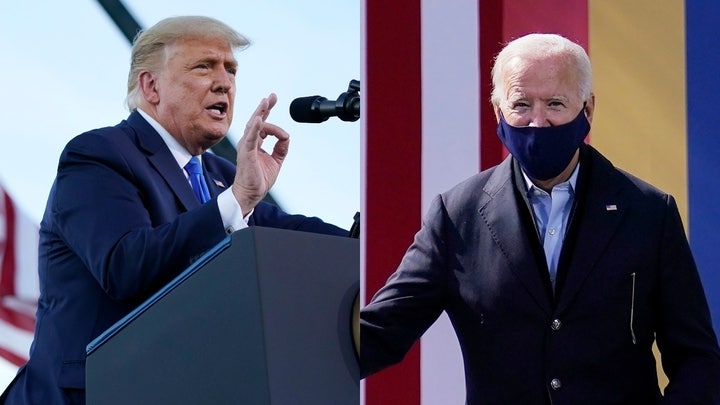 “Joe Biden has a scandal coming up that is going to make him an impotent candidate,” Trump said. "The scandal is so big, and the only thing he’s got going is he’s got a corrupt press that will not write about it.”

The president slammed the media, saying the majority of the press corp will not cover the stories stemming from Hunter Biden emails, while also slamming the media for writing “fake” stories about him and his relationship with his staff and campaign.

“My relationship with [campaign manager] Bill Stepien, Jason [Miller], Ronna [McDaniel], is phenomenal,” he said. “They write there could be a strain — they are sick people.”

He added, referring to a report about his White House chief of staff Mark Meadows.

The president also addressed the coronavirus pandemic, saying that "people are tired of COVID."

"People are tired of hearing Fauci and all these idiots, these people," Trump said. "Fauci, he's a nice guy, he's been here for 500 years."

The president slammed Fauci for saying earlier this year that Americans did not need to wear face masks.

"I have a list of 15 things about this guy and yet we keep him," Trump said. "Every time he goes on TV, there's a bomb, but there's a bigger bomb if you fire him."

Meanwhile, the president, rallying his staff, urged them to work their “a**es off.”

“You have two weeks. Put everything down. Don’t listen to anyone. Don’t ready the papers unless they’re good stories, because those make you feel good,” Trump said.

“The only way we can lost this election is if they cheat,” Trump added, saying, again that “we’re going to win.”

“You go out — we have to win, because out country is going to go to hell if we don’t. We’ll end up being a socialist country if we don’t,” the president said, adding that he “loves his team.” “We have no choice but to win. If we don’t win, this country is finished, and I mean it.”

He added: “Get off this phone and work your a**es off because the fact is, we are going to win. ... We have a movement like no other. ... We’re going to have the greatest victory — we will have a victory which will supersede our other victory.”