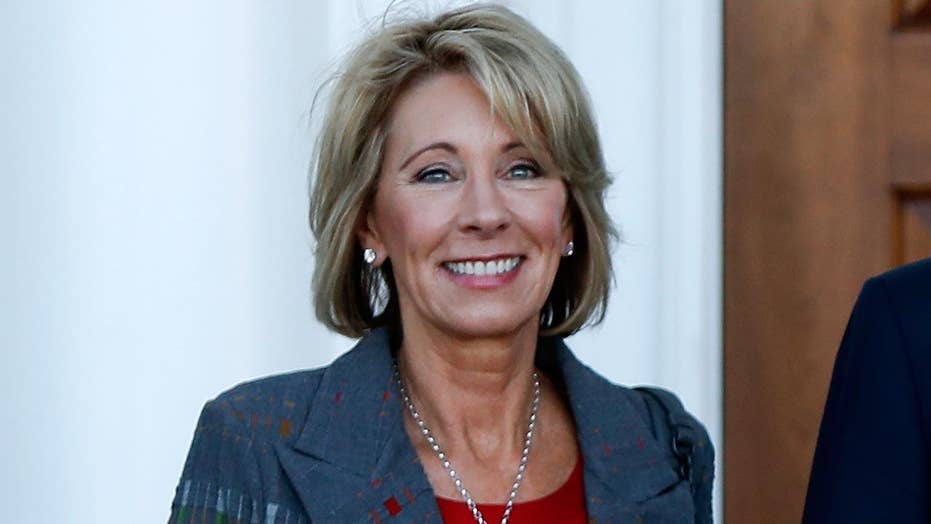 President-elect Donald Trump selected a charter school advocate and GOP donor from Michigan on Wednesday to be education secretary.

While some initially cheered Haley's selection, despite her limited experience on the international stage, the DeVos choice faced criticism even before it was formally announced Wednesday. Conservatives warned that DeVos, a longtime Republican donor, previously supported the Common Core education standards that Trump railed against during the campaign.

Trump, who was at his Palm Beach estate Wednesday for the Thanksgiving holiday, called DeVos "a brilliant and passionate education advocate."

DeVos, from Michigan, is a longtime advocate for charter schools and school vouchers. She currently leads the advocacy group, American Federation for Children, and sits on the board of the Jeb Bush-led Foundation for Excellence in Education.

"Under her leadership we will reform the U.S. education system and break the bureaucracy that is holding our children back so that we can deliver world-class education and school choice to all families," Trump said.

DeVos said in her own statement, "The status quo in education is not acceptable."

The DeVos family has been active in Republican politics for decades, especially as donors to GOP candidates and the Republican Party. DeVos' husband, Dick, is an heir to the Amway fortune and a former president of the company.

The couple gave $22.5 million to the Kennedy Center for the Performing Arts in Washington in 2010, at the time the largest private donation in the center's history.

"This would not qualify as 'draining the swamp,'" Cannon said, referencing Trump's campaign trail slogan. "And it seems to fly in the face of what Trump has stated on education policy up to this point."

In a statement to Fox News, American Federation of Teachers President Randi Weingarten said DeVos "has no meaningful experience in the classroom or in our schools."

“The president-elect, in his selection of Betsy DeVos, has chosen the most ideological, anti-public education nominee put forward since President Carter created a Cabinet-level Department of Education," Weingarten said. “In nominating DeVos, Trump makes it loud and clear that his education policy will focus on privatizing, defunding and destroying public education in America."

“She has a long and distinguished history championing the right of all parents to choose schools that best ensure their children’s success," he said in a statement.

When asked about DeVos' support for the Common Core standards, Trump spokesman Jason Miller said "the president-elect has been consistent and very clear in his opposition to Common Core."

"Anybody joining the administration is signing on to the president-elect's platform and vision for moving America forward," Miller said.

There was less immediate opposition to Haley's selection.

Haley, the daughter of Indian immigrants, is the only minority member chosen by Trump so far. Retired neurosurgeon and Trump loyalist, Ben Carson, an African-American, has been offered the job of secretary of the Department of Housing and Urban Development, according to a person familiar with the offer who spoke on the condition of anonymity because the person was not authorized to discuss the deliberations publicly.

Carson has not yet accepted the offer, but he tweeted on Wednesday that "an announcement is forthcoming about my role in helping to make America great again."

Trump said that Haley, his UN choice, "has a proven track record of bringing people together regardless of background or party affiliation to move critical policies forward for the betterment of her state and our country."

"She is also a proven dealmaker, and we look to be making plenty of deals," he said in a statement. "She will be a great leader representing us on the world stage."

South Carolina Sen. Lindsey Graham praised his home-state governor as a good choice and said in a statement that he looks forward to working with her on "overdue reforms of the United Nations." Graham is chairman of the Senate's Foreign Operations Subcommittee on Appropriations, which is responsible for funding the UN and all American foreign assistance.

Haley said she accepted the assignment partly out of "a sense of duty."

"When the president believes you have a major contribution to make to the welfare of our nation, and to our nation's standing in the world, that is a calling that is important to heed," she said in a statement.

Not all presidents have treated the ambassadorship to the U.N. as a Cabinet-level position, and Republicans have tended not to grant that status.

Trump spokesman Jason Miller said Trump is "spending significant time" weighing his choice for secretary of state. Among those he has interviewed is 2012 GOP presidential nominee Mitt Romney, who repeatedly denounced Trump during the 2016 campaign.

After secretary of state, the UN ambassador is the highest-profile diplomatic position, often serving as the voice for U.S. positions on the international stage. As part of the Cabinet, Haley would have more opportunity to shape U.S. policies, rather than simply defend the administration's positions.

Yet it could be an awkward role at times. Trump campaigned on the theme of "America first" and said he is skeptical about "international unions that tie us up and bring America down." Trump has also described the United Nations as weak and incompetent.

Haley would be the third consecutive female U.S. ambassador to the UN, after Susan Rice and Samantha Power, the current ambassador.

Bad blood between Trump and Haley was evident through much of the campaign.

"The people of South Carolina are embarrassed by Nikki Haley!" Trump wrote on Twitter in March. Haley denounced several of Trump's campaign comments and urged voters to "reject the siren call of the angriest voices."

DeVos, too, was slow to warm to Trump.

She told The Associated Press in July, "A lot of the things he has said are very off-putting and concerning."