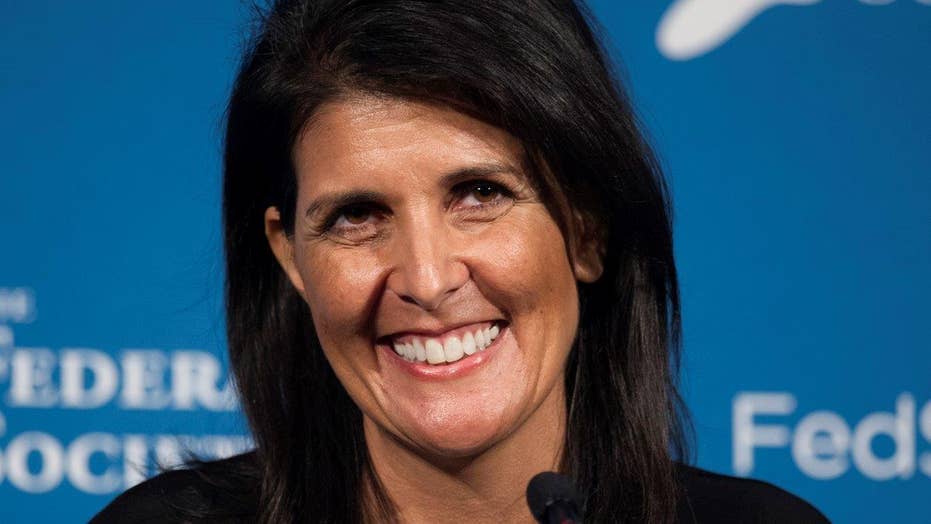 If confirmed by Senate Haley would be first female, non-white Cabinet-level official in Trump administration

President-elect Donald Trump on Wednesday chose South Carolina Gov. Nikki Haley to be his selection as the U.S. ambassador to the United Nations.

Haley was an outspoken Trump critic throughout much of his campaign, yet she's now poised to be the first female Cabinet-level official in the Trump administration. Haley still needs Senate confirmation to take the post.

"Governor Haley has a proven track record of bringing people together regardless of background or party affiliation to move critical policies forward for the betterment of her state and our country," Trump said in a statement. "She is also a proven dealmaker, and we look to be making plenty of deals. She will be a great leader representing us on the world stage."

A Trump spokesperson said Wednesday that Trump and Haley had "natural chemistry" when they met on Thursday and her selection as UN ambassador was an easy choice.

"Our country faces enormous challenges here at home and internationally, and I am honored that the President-elect has asked me to join his team and serve the country we love as the next Ambassador to the United Nations," Haley said.

Haley drew praise for her handling of the aftermath of the Emanuel AME Church mass shooting in Charleston, which stirred racial tensions after nine black parishioners were gunned down by an accused white shooter who allegedly wanted to start a race war. She also presided over the removal of the Confederate flag from the South Carolina state house grounds.

In January, Haley, who was beginning to earn buzz as a possible vice presidential pick, delivered the Republican response to President Obama's final State of the Union address. Parts of her speech, however, were viewed as a rebuke not only of Obama, but also of Trump.

"During anxious times, it can be tempting to follow the siren call of the angriest voices," Haley said. "We must resist that temptation. No one who is willing to work hard, abide by our laws, and love our traditions should ever feel unwelcome in this country."

Early in the Republican primary, Haley campaigned for Florida Sen. Marco Rubio before going on to support Texas Sen. Ted Cruz. Though she never appeared to totally warm to the eventual GOP nominee, she did say she would vote for Trump.

"This is no longer a choice for me on personalities because I’m not a fan of either one," Haley said in October. "What it is about is policy."

Haley, 44, met with Trump on Thursday and said they had a “very nice” conversation. The following day, during a speech to the Federalist Society's National Lawyer's Association, Haley talked about Trump's unusual path to the presidency.

"President-elect Trump deserves tremendous credit for the way he was able to connect with the electorate, but he did not do it by celebrating the Republican Party," she said. "And the American people did not vote for him because he had an 'R' next to his name."

She was generally endorsed for a spot on Trump's team by South Carolina Sen. Lindsey Graham, himself a frequent Republican critic of Trump.

"She’s done a good job as governor of South Carolina," Graham told the News & Observer. "She’s talented, capable and would do a good job in any assignment given to her."

Her new job clears the way for Lt. Gov. Henry McMaster to step into the role of South Carolina governor. McMaster was an early Trump endorser, backing him before the state's GOP primary in February.

The potential addition of Haley to Trump's team highlights a series of diverse candidates that Trump has considered for various cabinet spots. Dr. Ben Carson said he had been offered the position of Housing and Urban Development secretary and Trump has also met with Rep. Tulsi Gabbard, D-Hi.

Gabbard and former diplomat Ric Grenell had been rumored to be among the candidates for the UN ambassador job.

A Trump spokesperson said at least one other cabinet position could be announced later Wednesday. Though no specific names or departments were mentioned, former Gov. and presidential nominee Mitt Romney is being considered for Secretary of State and retired Gen. James Mattis is in contention for Secretary of Defense. Former New York City Mayor Rudolph Giuliani, Dr. Ben Carson and Kansas Secretary of State Kris Kobach are among other high profile figures who've met with Trump recently.

Fox News’ Nick Kalman and Meghan Welsh and the Associated Press contributed to this report.