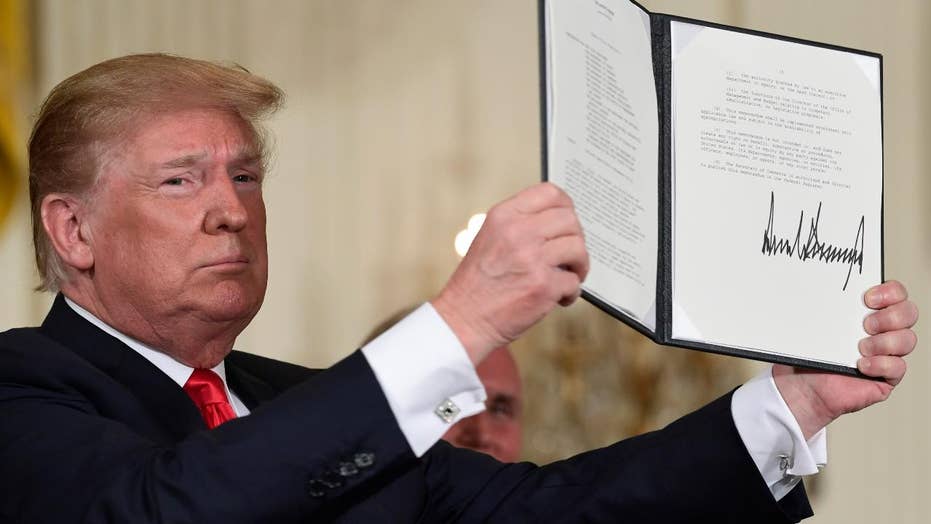 Trump’s ‘space force’: What does it entail?

President Trump announced a directive for the Pentagon to create a “space force” that will serve as a sixth branch of the military. What will this new force actually do?

Speaking at a meeting of the National Space Council, Trump ordered the Pentagon to immediately establish a national “space force” that would become the sixth branch of the armed forces.

“We are going to have a space force,” Trump said in Washington D.C. “An Air Force and a Space Force. Separate, but equal.”

This is not the first time that Trump has floated the idea of establishing a “space force.” The president mentioned the idea in May during a ceremony at the White House honoring the Army Black Knights college football team.

Trump did not go into details about what military role the so-called “space force” would carry out or who would command it, but he framed space as a national security issue, saying he does not want "China and Russia and other countries leading us."

Pentagon spokeswoman Dana White responded: “We understand the President's guidance. Our Policy Board will begin working on this issue, which has implications for intelligence operations for the Air Force, Army, Marines and Navy. Working with Congress, this will be a deliberate process with a great deal of input from multiple stakeholders.”

In this frame from NASA TV, NASA astronaut Ricky Arnold, left, and NASA astronaut Drew Feustel work on shuffling around a couple of space station pumps at the International Space Station on Wednesday, May 16, 2018. (NASA TV via AP)

Trump was joined by Vice President Pence, who heads the National Space Council, as well as NASA Administrator Jim Bridenstine, former astronaut Buzz Aldrin and other members of the council.

Along with the call for the “space force,” Trump also called for a build-up in the long term presence in space, threw his support behind the nascent commercial space travel industry and signed a directive to manage space traffic.

The directive calls for providing a safe and secure environment up in orbit, as satellite traffic increases. It also sets up new guidelines for satellite design and operation, to avoid collisions and spacecraft breakups.

The council's executive secretary, Scott Pace, told reporters before the meeting that space is becoming increasingly congested and current guidelines are inadequate to address the challenge.

Before making his remarks on the space program, President Trump also weighed in on the ongoing immigration crisis – blasting the U.S.’ current immigration laws and saying the crisis is “the Democrats’ fault.”

“The United States will not be a migrant holding facility,” Trump said. “We can't allow that to happen in the U.S. Not on my watch. We want safety and we want security.

Trump added: “If the Democrats would sit down and stop obstructing, we could have something quickly."

The Trump administration’s policy of separating migrant children from their parents has come under increasing scrutiny from both sides if the aisle.

The policy, which has resulted in nearly 2,000 minors being separated from their families over six weeks, has drawn sharp criticism from Democrats and even a number of influential Republicans, including former first lady Laura Bush, who called the policy “cruel” and “immoral” in an opinion piece in the Washington Post.