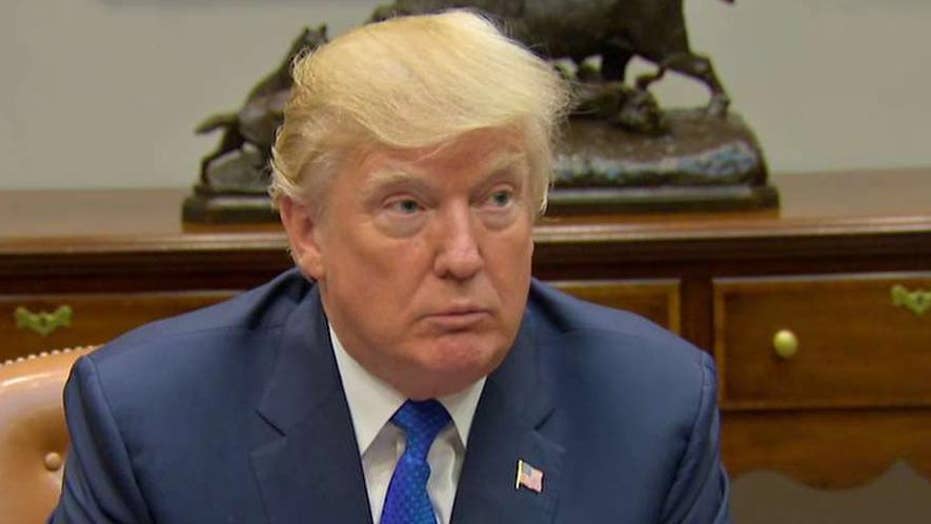 President Trump on Tuesday vowed to “take care of it” after North Korea fired its highest-ever intercontinental ballistic missile.

“A missile was launched a little while ago from North Korea,” the president told reporters at the White House, alongside the Republican leaders in Congress. “I will only tell you that we will take care of it.”

The president said he had a “long discussion” with Defense Secretary James Mattis, who also joined him for the press statement, on the threat and said it “is a situation that we will handle.”

Later Tuesday night, the president pointed to the missile launch as support for avoiding a potential government shutdown. "After North Korea missile launch, it's more important than ever to fund our gov't & military," Trump tweeted. "Dems shouldn't hold troop funding hostage for amnesty & illegal immigration. I ran on stopping illegal immigration and won big. They can't now threaten a shutdown to get their demands."

Tuesday’s missile launch is the first since the country fired an intermediate range missile in September. The latest missile flew 1,000 miles higher than during the first intercontinental ballistic missile launch in July.

Mattis said that in response, the South Koreans have fired “some pinpoint missiles out into the water” to make certain North Korea understands that they could be “taken under fire.”

The missile was launched from Sain Ni in North Korea and flew roughly 620 miles before landing in the Sea of Japan.

“The U.S. Department of Defense detected and tracked a single North Korea missile launch today at about 1:17 p.m. EDT,” Pentagon spokesman Col. Robert Manning said in a statement. “Initial assessment indicates that this missile was an intercontinental ballistic missile (ICBM).”

North Korea has been working hard to perfect “re-entry” technology to one day have a warhead be able to survive re-entry into Earth’s atmosphere.