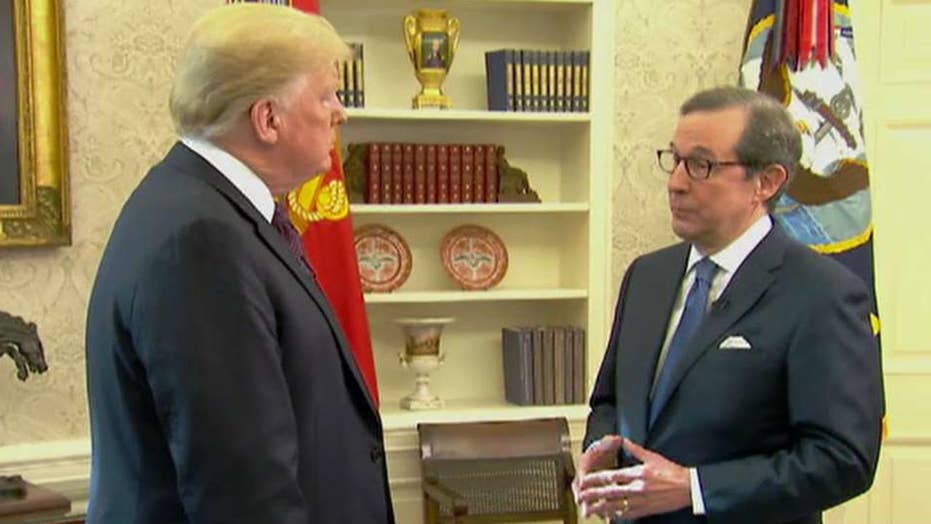 Trump sat down with the “Fox News Sunday” host on Friday for a wide-ranging discussion – the first time Wallace has interviewed Trump since he took office. Wallace pointed out that a federal judge ruled earlier Friday that the White House must reinstate Acosta’s press credential.

“Yeah, its fine, I mean it’s not a big deal. What they said, though, is that we have to create rules and regulations for conduct etc. etc. We’re doing that, were going to write them up right now. It’s not a big deal and if he misbehaves, we’ll throw him out or we’ll stop the news conference,” Trump said.

As President Donald Trump points to CNN's Jim Acosta, a White House aide tries to take the microphone from him during a news conference in the East Room of the White House, Wednesday, Nov. 7, 2018, in Washington. (AP Photo/Evan Vucci)

"If he misbehaves, we’ll throw him out or we’ll stop the news conference."

Wallace asked what rules the administration would put in place going forward after U.S. District Judge Timothy J. Kelly declared that Acosta should be allowed back in the White House.

“We’re writing them now. We’ll have rules of decorum, you know you can’t keep asking questions. We had a lot of reporters in that room, many many reporters in that room and they were unable to ask questions because this guy gets up and starts, you know, doing what he’s supposed to be doing for him and for CNN and you know just shouting out questions and making statements, too,” Trump said.

Kelly’s decision is temporary and further hearings are expected to take place in the next few weeks to determine whether or not yanking the credential violated CNN's and Acosta’s First and Fifth Amendment rights. The temporary order lasts for 14 days and CNN can now petition the Court for a permanent injunction.

"Nobody believes in the First Amendment more than I do and if I think somebody is acting out of sorts, I will leave."

“I will say this, look, nobody believes in the First Amendment more than I do and if I think somebody is acting out of sorts I will leave. I will say thank you very much everybody, I appreciate you coming and I’ll leave,” Trump continued. “And those reporters will not be too friendly to whoever it is that’s acting up.”

Acosta’s "hard pass," which provided expedited access to the White House grounds, was suspended last week after he engaged in a contentious back-and-forth with Trump during a press conference. Acosta refused to pass the microphone to a female White House aide and there was brief contact between the two.

CNN filed a federal lawsuit against the Trump administration on Tuesday demanding that the White House restore the press credential of the star reporter – but Press Secretary Sarah Sanders called the move “more grandstanding from CNN.”

Sanders issued a statement following the judge’s decision on Thursday: “Today, the court made clear that there is no absolute First Amendment right to access the White House. In response to the court, we will temporarily reinstate the reporter’s hard pass. We will also further develop rules and processes to ensure fair and orderly press conferences in the future. There must be decorum at the White House.”

Earlier this week, Fox News announced that it would support CNN’s effort to restore Acosta’s White House credential and filed an amicus brief with the U.S. District Court.