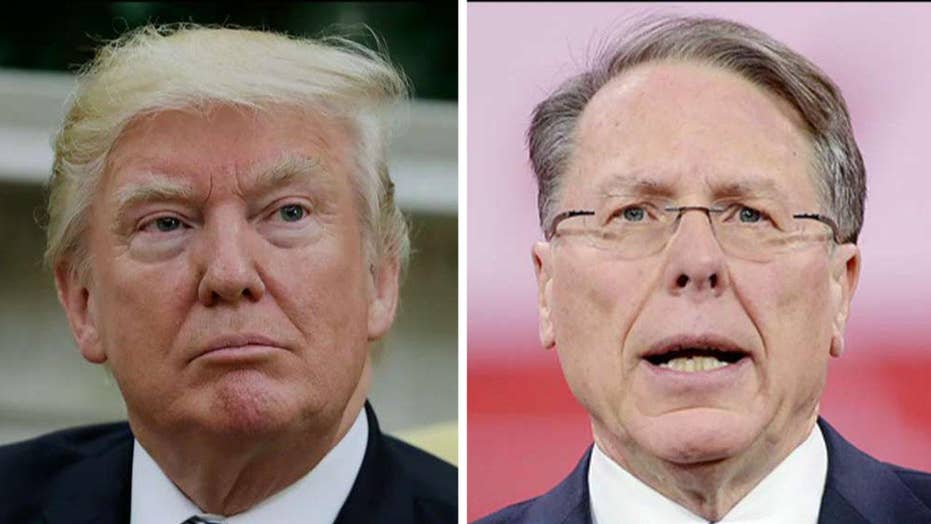 The White House pushed back late Tuesday on claims by the National Rifle Association (NRA) that President Trump had purportedly said universal background checks were off the table, amid an ongoing push for legislative action following two recent deadly mass shootings.

Earlier in the day, The Atlantic published an article saying Trump had opted against expanding federal background checks, citing a "person briefed on the call." But a White House official told Fox News that "meaningful" new background checks remain a legislative option, and denied that Trump said he supported universal background checks.

In a post on the NRA Twitter account, the organization's CEO and executive vice president, Wayne LaPierre, did not disclose the substance of his call with Trump.

"I spoke to the president today," LaPierre, who survived a leadership challenge in April, wrote in the tweet posted on the NRA's official account on Tuesday. "We discussed the best ways to prevent these types of tragedies."

The back-and-forth came shortly after Trump had hinted that he supported new background-check legislation following the massacres in Dayton, Ohio, and El Paso, Texas, that left dozens dead.

"Frankly, we need intelligent background checks," Trump said Aug. 9, adding that it was not a "question of NRA, Republican, or Democrat." Senate Majority Leader Mitch McConnell, R-Ky., also had said "bipartisan" gun-rights reforms were on the table.

But, this past Sunday, Trump appeared to walk back the push, citing what he called a "big" mental health problem, and noting that "we do have a lot of background checks now. ... very, very strong background checks."

Florida Republican Rep. Matt Gaetz weighs in on whether or not President Trump will be able to pass new bipartisan legislation for background checks on gun sales.

Speaking to reporters in the Oval Office, Trump also noted "a lot of the people that put me where I am are strong believers in the Second Amendment," and suggested he worries about blurring the contrast between Republicans and Democrats on the issue.

"We have to be very careful about that," he said.

And the president said he worried about the potential risk of a "slippery slope," where "all of a sudden everything gets taken away." Just 11 days earlier Trump dismissed that very same "slippery slope" thinking, which he attributed to the NRA. "I don't agree with that," he said then.

The waffling drew anger from Democrats, including Senate Minority Leader Chuck Schumer, D-N.Y., who said if Trump is serious about action he should call on McConnell to put a House-passed background checks bill up for vote.

"These retreats are heartbreaking, particularly for the families of the victims of gun violence," Schumer tweeted.

LOTT: NRA TURMOIL ISN'T A THREAT TO SECOND AMENDMENT -- BUT LOSING THE WHITE HOUSE WOULD BE

The Washington Post, citing unnamed sources, reported that LaPierre had warned Trump personally in early August that endorsing tougher background checks would not be popular with his voter base.

El Paso Fire Medical personnel arrive at the scene of a shooting at a Walmart near the Cielo Vista Mall in El Paso, Texas, on Aug. 3, 2019.  (Mark Lambie/The El Paso Times via AP, File)

But Republicans have refused to take up several Democratic-backed gun control bills that passed the House, saying they would encroach upon the Second Amendment without preventing the vast majority of shootings.

The Trump administration unilaterally banned bump stocks and other gun modifiers that make semi-automatic firearms fire faster in 2018, after a deadly mass shooting in Las Vegas, Nevada in 2017 left 58 dead and more than 800 injured. The move angered some conservatives, but the Supreme Court upheld the ban earlier this year.

Sen. Chris Murphy, D-Conn., who spoke with Trump last week, said the president expressed support then for working across the aisle "to come up with a background checks bill that can pass the Senate and save lives."

While he said he would wait to hear from Trump again directly, he compared the episode to Trump's apparent flip-flop on background checks following the Parkland, Fla., shooting after intervention from the NRA.

"It's time for Republicans and President Trump to decide whose side they're on," Murphy said in a statement. "Are they going to stand with the 90 percent of Americans who want universal background checks, or are they going to once again kowtow to the desires of the gun lobby?"