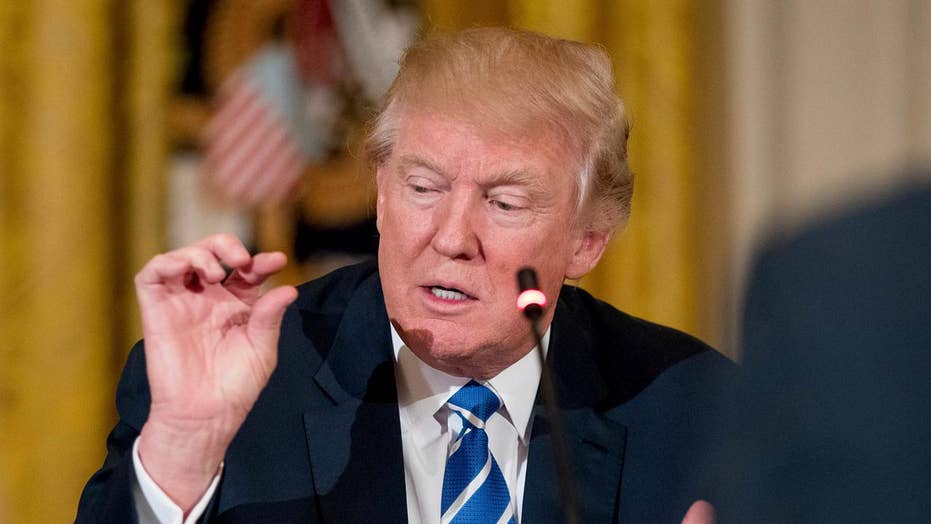 A key Democrat and Republican on congressional Intelligence committees doubted Sunday that the Justice Department would meet a bipartisan request to provide evidence by Monday on whether former President Obama ordered a wiretap on Donald Trump’s presidential campaign.

“I don’t expect to see any evidence,” California Rep. Adam Schiff, the top Democrat on the House Permanent Select Committee on Intelligence, told ABC’s “This Week.”

Schiff and committee Chairman Rep. Devin Nunes, R-Calif., purportedly made the request in a letter Saturday.

Schiff suggested Sunday that the Justice Department would have no evidence because either Trump “made up” the wiretap charge or that the president perpetuated a farfetched allegation.

He further suggested the department wouldn’t face “consequences” for failing to meet the deadline and that FBI Director James Comey would have an opportunity to tell what he knows at an open committee hearing scheduled for next week.

“We're going to be able to ask the director of the FBI … is there any truth of this? Have they seen any evidence of this?” Schiff said. “And I think on March 20, if not before, we'll be able to put this to rest.”

He also said Comey might welcome the opportunity to make clear whether he indeed asked the Justice Department to reject Trump’s wiretap claim.

Trump sparked the controversy last weekend with the tweet: "Terrible! Just found out that Obama had my 'wires tapped' in Trump Tower just before the victory. Nothing found. This is McCarthyism!"

He continued the allegation against Obama in other tweets, which included no evidence and were followed by an official White House request that Congress investigate the issue as part of a broader probe on Russia and perhaps others’ outside influence on the 2016 White House race.

Obama's director of national intelligence, James Clapper, has said that nothing matching Trump's claims had taken place. But that has not quelled speculation that Trump's communications were monitored by the Obama administration.

Last week, Schiff said his committee would answer the president's call to investigate the claim.

Nunes has said that so far he has not seen any evidence to back up Trump's claim and has suggested the news media were taking the president's weekend tweets too literally.

"The president is a neophyte to politics -- he's been doing this a little over a year," he told reporters last week.

On Sunday, Arkansas GOP Sen. Tom Cotton, a member of the Senate Select Committee on Intelligence, told ABC that Comey was unlikely to meet the Monday deadline -- only because the U.S. intelligence community’s work should remain top secret.

“There are reasons why the intelligence community, in particular the FBI, which often operates … in conjunction with the Department of Justice, is reluctant to make public statements," he said. "Because it could reveal what we do and what [we] don't know and how we know those things. And that's not something that we want our adversaries to understand.”

Sen. John McCain, R-Ariz., told CNN's "State of the Union" on Sunday that Trump could "clear this up in a minute" if he were to call the director of the CIA or the director of national intelligence and say, “OK, what happened?”

"I do believe on issues such as this, accusing a former president of the United States of something which is not only illegal, but just unheard of, that requires corroboration,” McCain continued. “I'll let the American people be the judge, but this is serious stuff."