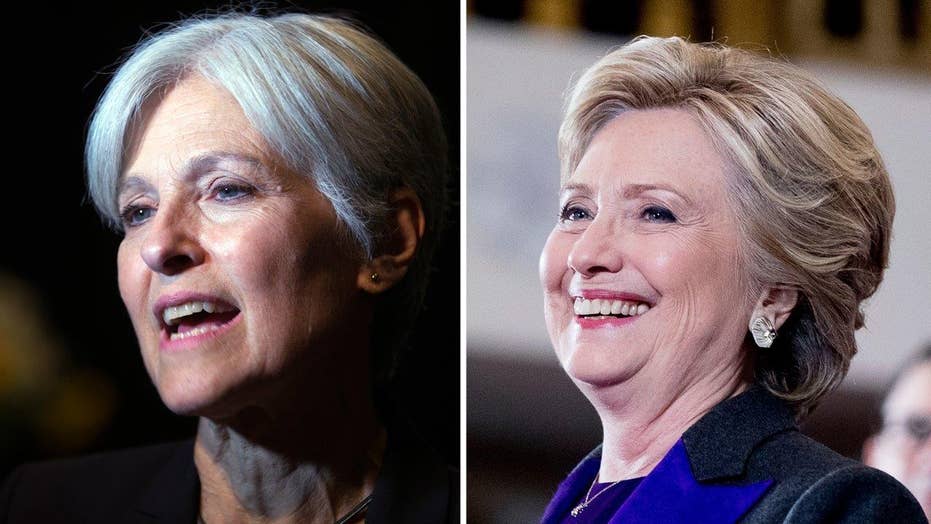 What are Stein, Clinton campaigns' end game with recount?

A Wisconsin judge rejected Jill Stein's request for a hand recount before the effort officially began and almost no one thinks the election's outcome will be changed. So what is the goal? Stein campaign manager David Cobb sounds off #Tucker

Michigan’s elections board will consider Friday a request from President-elect Donald Trump to block a hand recount of the state’s 4.8 million votes cast asked for by Green Party’s Jill Stein – who Trump’s lawyers called a “bottom-dwelling candidate.”

Trump’s lawyers argued Thursday that Stein should not be allowed to seek the recount because she was not “aggrieved” as the potential miscount could not conceivably have cost her the election. They also argued that Stein waited so late to file her recount petition, which the candidate filed Wednesday, that it will be impossible to finish by the Dec. 13 deadline.

“Stein, in fact, finished no higher than fourth in any state where she appeared on the ballot. Yet despite being just a blip on the electoral radar, Stein has now commandeered Michigan's electoral process,” they wrote in their filing.

"[The law] has never been understood to permit challenges by bottom-dwelling (and thus not aggrieved) candidates like Stein," the argued.

The objections from Trump's team suspends the planned Friday start of the recount until next week. A recount is already underway in Wisconsin, and Stein is also pushing for a court-ordered statewide recount in Pennsylvania. Trump won Michigan, Wisconsin and Pennsylvania in the election – all states that pollsters had predicted would go to Trump’s Democratic rival Hillary Clinton.

Stein blasted what she called Trump’s “cynical efforts to delay the recount and create unnecessary costs for taxpayers,” which she called “shameful and outrageous.”

Stein has argued, without any evidence, that irregularities in the vote suggests there could have been a cyberattack on voting machines that tampered with the vote. She says the only way to be sure is to verify the vote through a recount.

Experts cast doubt on the efficacy of the recounts, saying that it was unlikely they would flip anything close to the number of votes to change the outcome in any of the states in question.

The Wisconsin recount was estimated to cost about $3.9 million. Stein paid $973,250 for the requested recount in Michigan. Michigan's Republican secretary of state, Ruth Johnson, has said a recount could cost $5 million total.