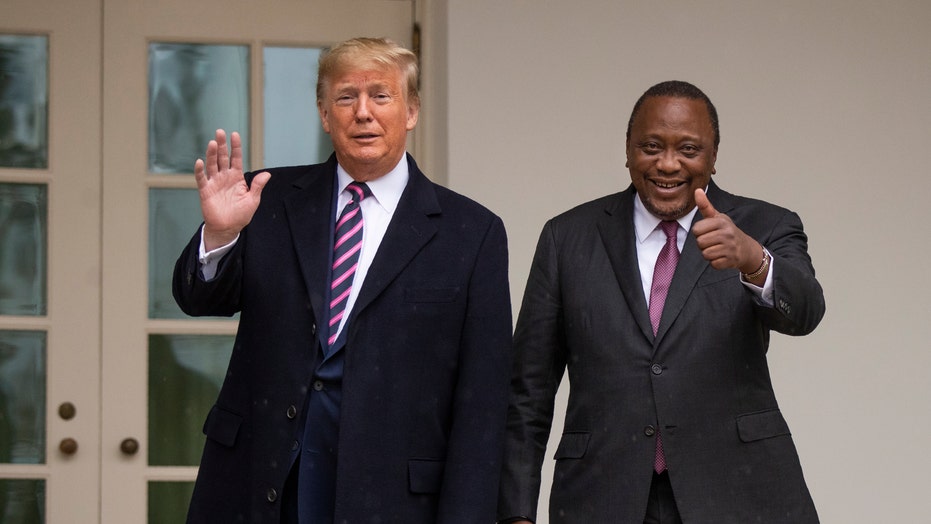 President Trump met with Kenyan President Uhuru Kenyatta Thursday to discuss a future trade deal between the two countries, as the U.S. tries to counter the influence of China on the African continent.

Trump said the first such bilateral agreement between the U.S. and a nation in sub-Saharan Africa would “probably” happen. “We’re going to start looking at that,” Trump told reporters as he and Kenyatta walked past the Rose Garden.

The Kenya trade deal would come on the heels of two other trade deals recently brokered by the Trump administration, one with China and one with Canada and Mexico.

As East Africa’s economic hub, Kenya is of strategic importance in the U.S.’s efforts to counter the influence of China. More than a decade ago, China surpassed the U.S. as Africa’s largest trading partner. China has also signed bilateral trade agreements with more than 40 African countries.

WHAT IS THE GAZA STRIP?

The Trump administration and Pentagon leaders have also repeatedly expressed concerns over Russia’s expanding influence on the continent. Russia’s interest in Africa began after U.S. and EU countries imposed sanctions on the country and it began to build ties elsewhere, in Asia and African countries.

Kenyatta, speaking at the Atlantic Council in Washington on Wednesday, warned against a return to a Cold War-like time when countries across Africa were forced to choose sides.

Global powers are "behaving like Africa is for the taking," Kenyatta said. “We don’t want to be forced to choose. ... We must begin to look at Africa as the world’s biggest opportunity, and I believe that you can dare to look at it with a fresh eye.”

WHAT IS THE AL-QAEDA LINKED AL SHABAB TERRORIST GROUP?

America was the country’s third largest trading partner in 2019, importing $667 million worth of clothing, fruit, nuts and coffee. According to Kenyatta’s office, Kenya has been working closely with the U.S. to craft a trade arrangement which guarantees duty-free access to the American market beyond the expiration of the African Growth and Opportunity Act (AGOA), which expires in 2025. The AGOA currently offers duty-free access to the American market for 39 sub-Saharan African countries.

Kenyatta quashed concerns that a bilateral free trade deal would undermine a new pan-African free trade agreement aimed at creating the world’s largest common market. Kenya was one of the first to sign the deal, he said.

The meeting between the two leaders was also expected to focus on security and countering extremism. In January, news broke that the Trump administration was considering a drawback of troops from the African continent, to focus on threats from Russia and China head-on. Chairman of the U.S. Joint Chiefs of Staff, General Mark Milley said resources "could be reduced and then shifted, either to increase readiness of the force in the continental U.S. or shifted to" the Pacific.

But just weeks ago, the al-Qaida-linked al-Shabab extremist group based in neighboring Somalia carried out the deadliest attack against the U.S. military in Africa since 2017 when four soldiers were killed in Niger.

Three Americans were killed last month, including a service member and two contractors, and several U.S. aircraft were destroyed at a military base on Kenya’s coast. It was the first al-Shabab attack against the U.S. military in Kenya.

Al-Shabab has launched numerous attacks inside Kenya and is the target of a growing number of U.S. airstrikes inside Somalia during the Trump administration, including 63 last year.