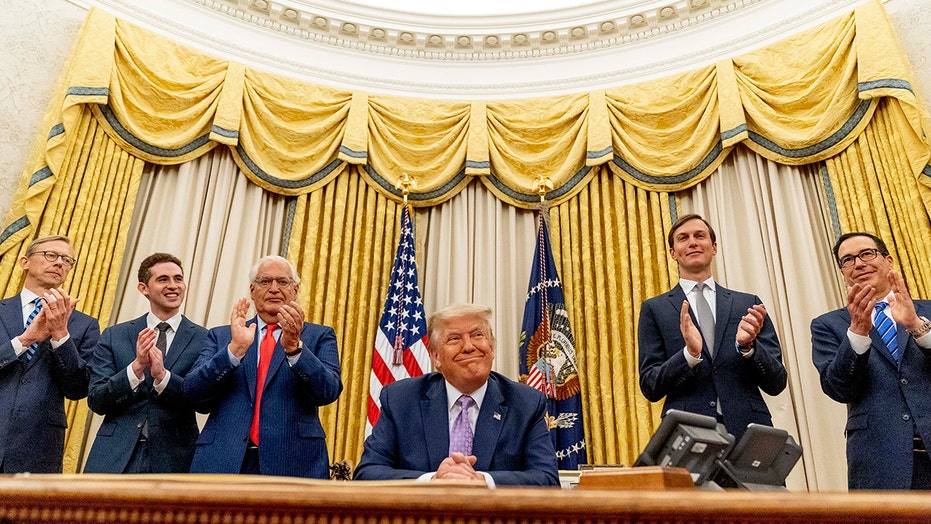 Trump on Israel-UAE peace deal: Everyone said this couldn't happen

President Trump on Tuesday predicted that the Iranian regime will be forced to come to the table for a deal if he wins re-election -- suggesting that Iran is holding out in case former Vice President Joe Biden wins in November instead.

“We’ll see what happens with Iran, I’d say right after the election, within a period of a week, maybe a month, but within a period, a very short period,.... literally a very short time, you'll have Iran coming back and saying lets get this whole thing worked out,” he said in the Oval Office.

Trump spoke in the Oval Office ahead of the signing of the Middle East diplomatic deals between Israel and two Gulf nations -- the United Arab Emirates and Bahrain.

The Trump administration has taken an aggressive approach to Iran, conducting a “maximum pressure” campaign against the theocratic regime and pulling out of the Obama-era Joint Comprehensive Plan of Action (JCPoA.)

Trump suggested that the strategy, which has seen the U.S. impose sanctions on Tehran, was working and would bring Iran to the table if he wins re-election.

“Iran is suffering, unfortunately, I don't want them to suffer, but their economy is tanked,” he said. “They have a minus 27 GDP, no one’s ever heard of a number like that...and I think they want to make a deal but they’d rather deal with Sleepy Joe Biden than me,” he said.

Trump had made a similar prediction on "Fox & Friends" earlier Tuesday, where he predicted a deal with Iran within a month of him being re-elected.

“And it'll be a really good deal for the United States. Because they have no choice,” he said. “But if Biden got in, they'll just take it. They'll take our guts out.”

In the Oval Office, Trump said there were “five or six” other countries who he believes will be signing agreements normalizing relations with Israel as Bahrain and the UAE did on Tuesday.