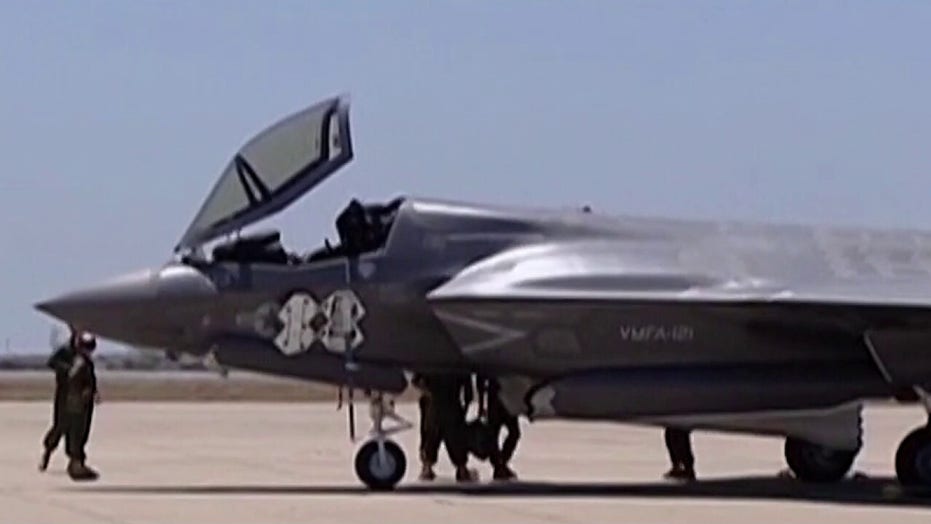 Joel Rubin warns about the dangers of transferring our most advanced stealth fighter jet to the Gulf nation.

As President Trump seeks to forge a historic step for peace in the Middle East, by presiding over the agreement normalizing relations between Israel and the Gulf Arab nations of the United Arab Emirates and Bahrain, the looming shadow of Iran will not be far from the White House ceremony on Tuesday. The administration is tightening the global squeeze on the Islamic Republic.

"The United States must keep pressure on the regime in Tehran as long as it creates conflict, chaos, and human suffering," U.S. Ambassador to the United Nations Kelly Craft told Fox News. "Endangering millions of innocent men, women and children in Syria, Yemen, Lebanon, Iraq and other parts of the Middle East cannot be tolerated. Cutting off revenue to the world’s No. 1 sponsor of terror will save lives."

The Trump administration is ratcheting up the focus on nations that illegally engage in trade with Iran, despite United Nations and U.S. sanctions. The issue of Iran and its continued trade with the international community is expected to be a part of the president's address to the United Nations General Assembly later this month.

The U.S. Treasury Department recently slapped sanctions on 11 new petrochemical firms it claimed are supplying Iran with prohibited oil. Two of the firms, Petrotech FZE and Chemtrans Petrochemicals, are based in the United Arab Emirates. A third UAE-based firm is accused of helping to "broker the sales of tens of thousands of metric tons of petroleum products." Chinese, Iranian and Hong Kong firms were also cited.

"The Iranian regime uses revenue from petrochemical sales to continue its financing of terrorism and destabilizing foreign agenda," said Treasury Secretary Steven Mnuchin. "The Trump administration remains committed to targeting those contributing to Iran's attempts to evade U.S. sanctions by facilitating the illicit sale of Iranian petroleum products around the world."

Despite the sanctions imposed by the U.S. and the United Nations Security Council sanctions, as well as efforts by the Gulf Cooperation Council countries to choke off illegal trade, products do slip through.

The UAE Federal Customs Authority reportedly notes that the number of sanctioned goods actually increased from 9% in 2019 to 12% this year, with petrochemicals accounting for the largest amount of material that passes through its borders. An estimated 78% of material imported from Iran was said to be on the sanction list last year.

A recent Carnegie Endowment for International Peace report blamed "Iranian sanctions-busters" in the UAE for the flow of goods. The country is a member of the International Financial Task Force, a consortium of countries united in rooting out terrorist financing, as part of its membership in the Gulf Cooperation Council. A report by the Task Force earlier this year said that the UAE has tightened financial regulations in recent years to try to overcome a perception among some foreign investors that it is a hot spot for illicit money.

On Tuesday, Sept. 15, senior delegations from the UAE, Bahrain and Israeli Prime Minister Benjamin Netanyahu will gather at the White House to sign a historic agreement normalizing diplomatic relations with the Jewish state. The Trump administration-ushered pact could be followed by the U.S. selling its most advance stealth fighter jet, the F-35, to Abu Dhabi.

"We are helping each other," Maduro said.

President Trump is weighing further sanctions against Maduro's government because of its continued Iran trade.

Venezuela's President Nicolas Maduro, center, and first lady Cilia Flores, wave to supporters as they leave the National Pantheon after attending a ceremony to commemorate an 1800's independence battle, in Caracas, Venezuela, Wednesday, Aug. 7, 2019. Sweeping new U.S. sanctions freeze all of the Maduro government's assets in the U.S. and even threaten to punish companies from third countries that keep doing business with his socialist administration. The first couple is accompanied by Defense Minister Gen. Padrino Lopez. (AP Photo/Leonardo Fernandez)

"The oppressive governments in Caracas and Tehran rob their people of basic freedom," said Craft. “Their unholy alliance must be opposed for the sake of the international community and the tens of millions of people in their respective countries who deserve democracy and a better future."

As in Iran, the ambassador notes that Maduro sacrifices the wellbeing of his nation's people to remain in power.

"Venezuelan and Iranian citizens have been brutalized by their rulers for far too long," said Craft, who notes that illicit trade with Iran only punishes the citizenry and helps keep dictatorships in power. “It is critical to cut off the financial means for these terrible governments that cling to power by killing, torturing, and intimidating their own people," she added.

Venezuelan pro-democracy activist Isaias Medina III, who once represented Caracas as a diplomat at the United Nations, says his homeland is helping to prop up the Tehran regime.

"The Venezuela and Iran alliance could not be stronger, described by Chavez as 'Sister Revolutions' due to their Anti-American sentiments and the need to vanquish U.S. values and principles," he says.

Medina is an Edward S. Mason Fellow in public policy from Harvard University and says the partnership between Tehran and Caracas poses a threat to the United States.

"Sanctions evasion has been one of many goals of the Castro-Chavista regime since the get-go with Iran, now both under the same sanction grip have strengthened creative ties between them. Illicit arms, drug trafficking and money laundering have been their objectives," he says.

Trump is expected to also raise the ongoing crisis in Venezuela during his U.N. General Assembly address as well as the continuing threats from Iran.

Reuters contributed to this report