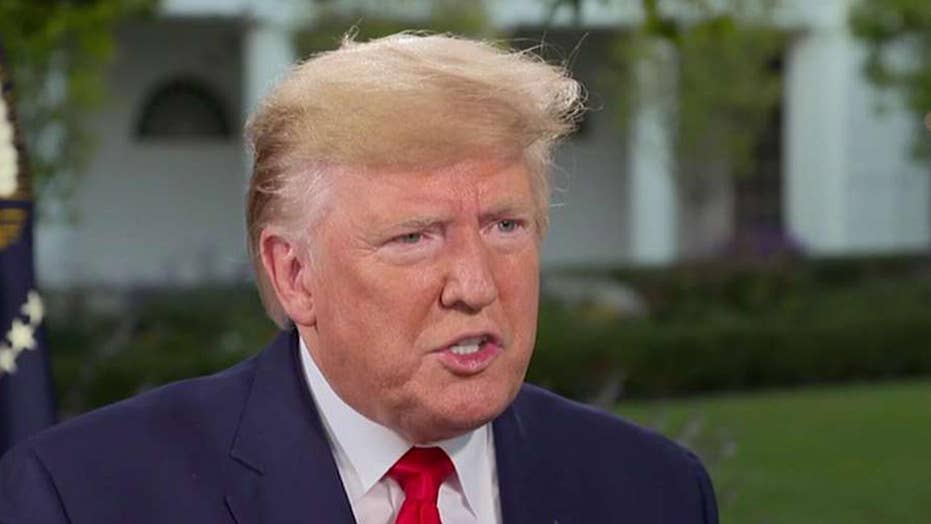 Trump on impeachment secrecy: They don't want the facts to come out

President Trump discusses re-election and impeachment during an exclusive interview on 'Hannity.'

President Trump described House Democrats’ impeachment inquiry as a “lynching” on Tuesday, claiming the way it's being conducted opens the door for future presidents to be impeached “without due process or fairness or any legal rights.”

“So some day, if a Democrat becomes President and the Republicans win the House, even by a tiny margin, they can impeach the President, without due process or fairness or any legal rights,” Trump tweeted. “All Republicans must remember what they are witnessing here—a lynching. But we will WIN!”

The language recalled the famous charge by now-Supreme Court Justice Clarence Thomas, who is black, that his 1991 confirmation process was akin to a “high-tech lynching,” as he denied allegations at the time of sexual harassment against Anita Hill.

But Trump was swiftly condemned by Democrats for using such racially charged language on Tuesday.

"It’s beyond shameful to use the word 'lynching' to describe being held accountable for your actions," Julian Castro, a Democratic presidential candidate, tweeted.

“Thousands of African Americans were slaughtered during the lynching epidemic in this country for no reason other than the color of their skin,” he said. “The president should not compare a constitutionally mandated impeachment inquiry to such a dangerous and dark chapter in American history.”

As detailed in a whistleblower complaint and transcript of the call, Trump pushed the Ukrainian president to launch an investigation into former Vice President Joe Biden and his son, Hunter Biden, over their dealings in Ukraine—specifically, why the elder Biden pressured the former Ukrainian president to fire a top prosecutor who was investigating a natural gas firm where Hunter sat on the board.

The president’s request also came after millions in U.S. military aid to Ukraine had been frozen, something critics have cited as evidence of a quid pro quo arrangement. The White House and the president’s allies have denied a quid pro quo -- though Acting White House Chief of Staff Mick Mulvaney seemed to say otherwise, before walking it back -- and the Bidens have maintained that they did “nothing wrong.”

Meanwhile, House Republicans have blasted House Intelligence Committee Chairman Adam Schiff for the way he has handled the inquiry thus far, claiming last week that he and other Democratic committee chairs are withholding critical impeachment-related documents and records from them.

On Monday night, Republicans introduced a resolution to censure Schiff, who is from California, over his handling of the impeachment inquiry, but the Democratic-led House voted to set aside the measure.

The vote was 218-185. All Democrats voted to table the censure resolution, with all Republicans voting to take action--a move Trump praised Tuesday morning.

TRUMP UNLOADS OVER SYRIA, IMPEACHMENT, DORAL, SAYS HE 'SHOULD BE ALLOWED TO RUN THE COUNTRY'

“Each member of Congress must uphold a high standard of honesty and integrity. When it comes to matters of our national security, that responsibility is even greater,” McCarthy, R-Calif., said. “Chairman Schiff has fallen short of his duty. From claiming he had evidence of Russian collusion with the Trump campaign to covering up his committee’s relationship with the whistleblower, he has demonstrated a pattern of lying to the American people on matters of intelligence.”

Schiff, though, tweeted Monday night: “It will be said of Republicans, when they found they lacked the courage to confront the most dangerous and unethical president in American history, they consoled themselves by attacking those who did.”

Schiff has said that he “should have been more clear” regarding his committee’s prior contact with the whistleblower, which was not initially revealed.

Schiff previously said that "we have not spoken directly to the whistleblower," referring to his intelligence committee -- although his office later narrowed the claim, saying Schiff himself "does not know the identity of the whistleblower, and has not met with or spoken with the whistleblower or their counsel" for any reason.

Fox News' Gregg Re and Tyler Olson contributed to this report.