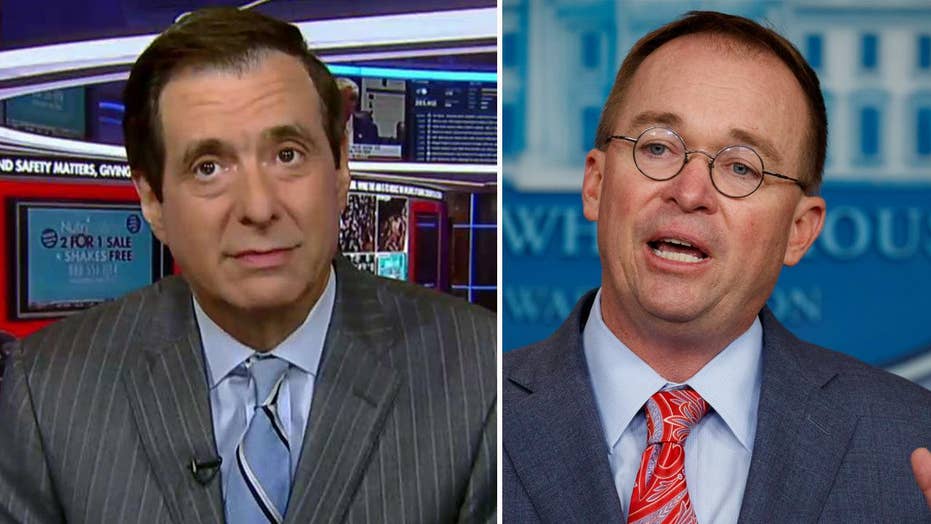 Howard Kurtz: Mulvaney's hands-off approach to Trump is what the boss wanted

I have the strong feeling that nothing I write about today will be as fascinating as Pierre Deletcto.

That’s the nom de plume for Mitt Romney’s secret Twitter account, discovered through some nice detective work by Slate’s Ashley Feinberg and raising the question of why a prominent United States senator with 2 million Twitter followers would need an online alter ego. Yes, he said or liked a few things (especially about Donald Trump) that would have been difficult to express as a Utah lawmaker, but I think this was a way of venting, a wild-and-crazy moment for a buttoned-down guy who usually colors inside the lines.

Romney, however, is in better shape right now than Mick Mulvaney, as the press piles on after his rough week and is suddenly filled with damaging leaks.

In the wake of his disastrous White House press conference, it’s worth recalling that the acting chief of staff wouldn’t have been at the podium had Trump not asked him to announce that his Doral golf resort would host the next G-7. Mulvaney himself noted this as he struggled through an attempted cleanup interview Sunday with Chris Wallace, since otherwise he wouldn’t have made his explosive comments about Ukraine.

FROM SYRIA TO IMPEACHMENT, TRUMP IS ON A WAR FOOTING

Mulvaney was meeting with Republicans over the weekend and conveyed their unease with the Doral decision, prompting a rare reversal by Trump. The president blamed “crazed” and “irrational hostility” by the media and Democrats, but it was the lack of his support in his own party that prompted him to ditch the plan.

“The president first heard the criticism of his choice of the Doral watching TV, where even some Fox News personalities were disapproving,” the New York Times says.

But now Mulvaney is really taking the heat, in a stark reminder that the former congressman has never shed his “acting” title.

He tried on “Fox News Sunday” to insist that he didn’t say what everyone saw him say about Trump linking a delay in military aid to Ukraine to an investigation of its possible role in the DNC hacking of 2016. Mulvaney was more conciliatory than in his walkback statement ripping the media for conducting a witch hunt. He finally retreated to saying that perhaps he should have been clearer and that people had misinterpreted his remarks.

The Washington Post casts his job as being on the line:

“Trump has privately expressed displeasure with his acting chief’s job performance and…some White House officials are seeking to replace him, according to several people familiar with the matter who spoke on the condition of anonymity to reveal private discussions. Several officials said Trump’s aides and allies are considering options for a new chief of staff.

“On Friday, White House press officials said Trump continued to support Mulvaney…But the chief of staff may have damaged that standing with his Fox News interview, in which he explained Trump’s desire to host the G-7 at his property by saying the president ‘still considers himself to be in the hospitality business.’”

Politico quotes one unnamed adviser as calling Mulvaney’s Fox sitdown a “self-immolation.” What’s more, the website says, “aides and allies have started to contemplate the length of Mulvaney’s tenure in the West Wing…

“In recent months, Jared Kushner, the president’s senior adviser and son-in-law, has grown fed up with Mulvaney at various points and has spoken poorly of his laissez-faire management style, one Republican close to the White House said.”

Yet the New York Times’ Maggie Haberman tweeted yesterday that Mulvaney still has some support and drew applause at a White House staff meeting.

So here’s the thing: Mulvaney has basically taken a let-Trump-be-Trump approach to his job. As other aides have fallen out of favor or decided to bail—John Bolton, Jim Mattis, Bill Shine, Rick Perry, Kirstjen Nielsen, Kevin McAleenan—Mulvaney has not tried to limit Trump’s tweets or talk him out of potentially unpopular decisions.

Mulvaney’s hiring was in no small measure a reaction to the ouster of John Kelly, the retired general who came in vowing to impose military-style discipline on a chaotic White House. Kelly, in turn, was a reaction to Reince Priebus, who resigned amid criticism that he didn’t do enough to control the staff (because Trump never gave him that authority.)

So now Mulvaney is taking flak for badly managing impeachment and the uproar over Syria, which is code for saying he’s not reining in Trump, which the president would never allow because he doesn’t want underlings telling him what to do. When looking to replace the fired Bolton, Trump said the national security adviser’s job is easy because “I make all the decisions.”

It's not clear whether Mulvaney will survive, or wants to survive, or will decide to run for South Carolina governor instead. But the drip-drip-drip of leaks is unfair to a guy who was doing the job that the boss wanted him to do.