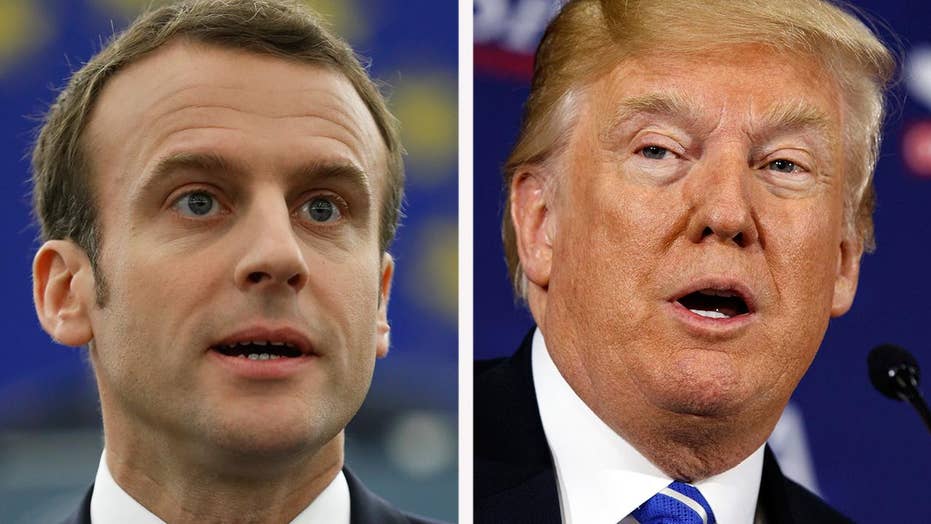 Macron on Trump's standing on the world stage

The French president sits down exclusively with 'Fox News Sunday' anchor Chris Wallace on the eve of his three-day state visit to Washington.

The Macrons' visit, to celebrate nearly 250 years of U.S.-French relations, will be headlined by a White House state dinner on Tuesday.

The White House has said little about the dinner and surrounding events, sticking to the tradition of trying to maintain an element of surprise for guests.

On Monday, the president and first lady Melania Trump will dine privately with Macron and his wife, Brigitte, at Mount Vernon, the home of America's first president, George Washington, on the banks of the Potomac River in Virginia. The White House said the setting will serve as a reminder of France's "unique status" as America's first ally.

Trump ended his first year without receiving a foreign leader on a state visit, making him the first president in nearly 100 years to do so.

Senate Majority Leader Mitch McConnell, of Kentucky, was invited, but his office said he is unable to attend.

"It sounds like what they're planning will be spectacular," said Jeremy Bernard, who was White House social secretary in 2014, the last time the U.S. feted a French president.

In a break with tradition, Trump, a Republican, has not invited any journalists or Democratic members of Congress, said a White House official who was not authorized to discuss the arrangements. But Louisiana Gov. John Bel Edwards, a Democrat, has confirmed his attendance.

Louisiana is perhaps the U.S. state most influenced by French culture. French explorers controlled the territory, then lost control to at least parts of it at times to England and Spain before selling it to America in 1803 in the Louisiana Purchase.

The event Tuesday in the State Dining Room will be smaller than those of preceding President Barack Obama, whose guest list of hundreds requiring the event to be held in a tented pavilion erected on the South Lawn because no room in the White House can accommodate that many people.

Most of the responsibility for executing a flawless celebration falls to the first lady and her staff, including the décor, who performs after dinner, who sits next to whom and what is served.

Another closely held secret, beyond the final guest list, is what the first lady will wear. The public will get the first glimpse of her gown when the first couple steps on to the North Portico on Tuesday night to welcome their dinner guests.

Still, a likely choice would be Dior, the French design house whose fashions Mrs. Trump often wears, or Herve Pierre, the French-American who designed her inaugural gown and other looks.

After dinner, guests strolled down the hall to the East Room to watch performers in the roles of Washington and the Marquis de Lafayette, the Frenchman who served on Washington's staff in the Continental Army. Sarkozy toured Mount Vernon the following day.

When Macron's limousine first pulls up the White House driveway on Tuesday morning, Trump, the first lady, White House and administration officials and hundreds of invited guests will be waiting on the South Lawn. The pomp-filled arrival ceremony is for the man who became the youngest president in French history when he was elected in 2017 at age 39 on his first run for office.

The Trump-Macron relationship appeared to get off to a bumpy start with a white-knuckler of a handshake when the political novices met for the first time at a NATO summit in Brussels last May.

But Macron likely sealed the bond after Trump accepted his invitation to attend the annual Bastille Day military parade in the center of Paris in July. Macron and his wife also took Trump and the first lady on a tour of Napoleon's tomb and whisked them up into the Eiffel Tower for dinner overlooking the City of Lights. The experience led Trump to order up a military parade in downtown Washington for later this year.

But the two part company on some significant issues, including the Paris climate accord, which Trump withdrew the U.S. from last year, and the Iran nuclear deal, another multinational agreement that Trump is itching to pull out of.

The president did rally Macron and British Prime Minister Theresa May, with whom Trump also has sparred, to mount a joint military operation against Syria in response to an apparent chemical attack this month that killed Syrian civilians. Macron still worries about Trump's desire to remove U.S. troops from Syria.

Mrs. Trump's social secretary, Rickie Niceta, came aboard last year after two decades of event planning for a caterer whose clients included the White House, the State Department and several embassies, in addition to working on the past five presidential inaugurations, including Trump's. The first lady, who speaks French, also has experienced staff running the kitchen, pastry shop and florist shop.