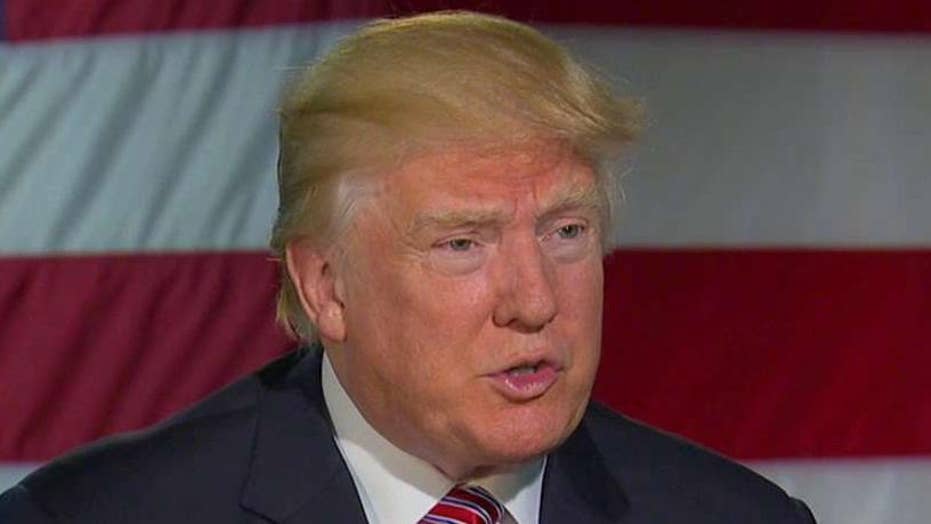 Donald Trump: What happened in Orlando is a disgrace

On 'Hannity,' the presumptive Republican nominee fires back at the Democratic frontrunner and discusses how he plans to protect American citizens from Islamic extremists

A congressional push to ban or restrict gun sales for those on terror watch lists gained bipartisan momentum Wednesday, with everyone from key Republican lawmakers to Donald Trump to the National Rifle Association opening the door to discussing the idea.

The presumptive Republican presidential nominee indicated interest in the push in a tweet Wednesday morning announcing a meeting with the NRA.

The meeting comes as discussions are underway on Capitol Hill on whether lawmakers might be able to proceed on a measure to crack down on firearms sales to those on terrorism watch lists or no fly lists, in the wake of the Orlando terror attack that left 49 people dead at Pulse nightclub.

The shooter, Omar Mateen, had been on a watch list for 10 months before being removed.

The NRA, for its part, has walked a fine line on such proposals. On Tuesday, it tweeted that bans for people on watch lists are "ineffective, unconstitutional, or both."

Chris Cox, director of the NRA Institute for Legislative Action, clarified Wednesday that the NRA "believes that terrorists should not be allowed to purchase or possess firearms, period."

He said those on a watch list who try to buy a gun "should be thoroughly investigated by the FBI and the sale delayed while the investigation is ongoing." If there's evidence of terrorist activity, he said, the sale should be blocked and the suspect arrested. But he added, "At the same time, due process protections should be put in place that allow law-abiding Americans who are wrongly put on a watchlist to be removed."

That falls in line with a plan from Republican Texas Sen. John Cornyn to let the government delay firearms sales to suspected terrorists for up to 72 hours.

A Cornyn aide confirmed to Fox News that the senator is now in talks with California Democratic Sen. Dianne Feinstein over her revived proposal to outright ban gun sales to those on such lists. Feinstein's plan goes further than Cornyn's and is the legislation most Democrats are backing.

"We all agree on stopping known or suspected terrorists from purchasing a weapon, the question is whether we do it in a way that's constitutional," the Cornyn aide said.

Republicans' main point of contention with the Democrats' approach has been that one incorrect entry could deny someone their Second Amendment rights. But the Orlando attack has spurred renewed interest on both sides in exploring revised legislation.

Senate Majority Leader Mitch McConnell said Tuesday he was "open to serious suggestions from the experts as to what we might be able to do to be helpful.”

Pennsylvania Sen. Pat Toomey announced late Wednesday he will draft his own legislation on the issue Thursday that he said will “help ensure that dangerous terrorists are denied a firearm, while providing sufficient due process to protect the rights of law-abiding gun owners.”

Toomey, a Republican, seemed optimistic that meaningful firearms legislation could be approved in the near future. “We have now come to a moment in which I am hopeful that the logjam [in Congress] can be broken and we can move forward for the safety of the American people,” he said in a statement.

On Tuesday, Maine’s Republican Sen. Susan Collins and independent Sen. Angus King said they’d be ready to support a measure to prevent those on watch lists from buying a gun.

Any similarities between Trump and Clinton on gun laws, however, end on this issue. Trump told an Atlanta crowd Wednesday that some of the "carnage" in Orlando could have been avoided if others in the club that night were armed.

It's unclear whether all sides can find common ground on the watch list issue in the coming days. Feinstein's proposal was defeated in the Senate last December, a day after the San Bernardino shootings left 14 dead.

That same day, the Senate also fell short of the necessary votes for the rival plan by Cornyn.

A Democratic senator, Chris Murphy of Connecticut, on Wednesday also launched a filibuster to force a vote on Feinstein's gun control legislation.