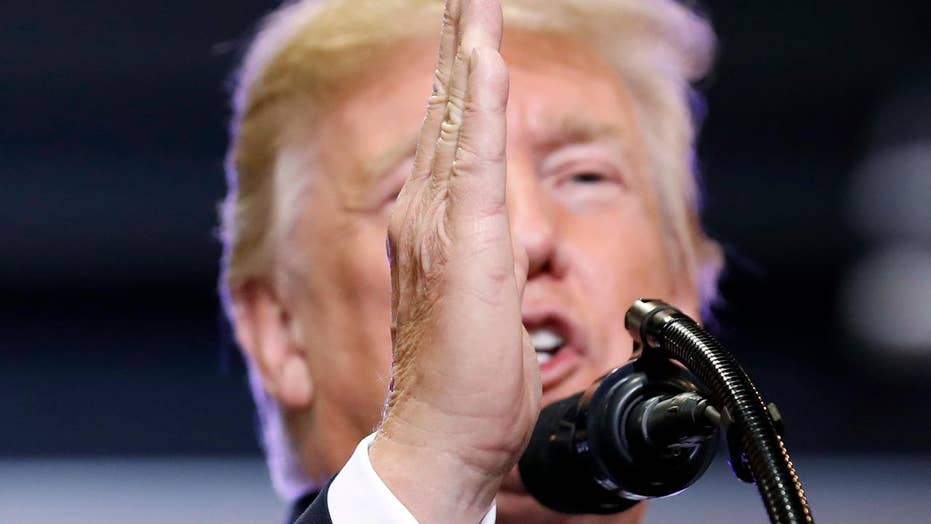 President sounds off on coverage of his Charlottesville response; Alicia Acuna reports from Reno, Nevada

A defiant President Trump rallied with his base for more than an hour Tuesday in Arizona, trashing the media over its coverage of his response to the recent violence in Charlottesville, Va., while criticizing the state’s Republican senators for not getting behind him.

The president also signaled during the Phoenix rally that he could soon pardon Joe Arpaio, the former sheriff in Maricopa County famous for his tough stance against illegal immigration.

But Trump was most animated when defending himself against accusations he wasn’t forceful enough in condemning the white supremacists and racists who were protesting in Charlottesville earlier this month. He blamed the media for distorting his comments.

At one point, the president pulled a piece of paper out of his jacket and re-read his initial statements condemning the racists involved the protests.

“Did they report that I said that racism is evil?” Trump asked of the media. The crowd yelled, “No!”

“You know why?” Trump asked. “Because they are very dishonest people.”

A 32-year-old counter-protester was killed in Charlottesville after police said a Nazi sympathizer rammed his car into a crowd. After the violence, the president faced criticism for blaming “both sides” for the unrest instead of just white nationalists.

As Trump continued to rail against the media’s coverage of him, the crowd began chanting: “CNN sucks!”

“These are sick people," Trump said of the media. "You know the thing I don’t understand? You would think … they’d want to make our country great again. And I honestly believe they don’t.”

The events in Charlottesville cast a shadow over the rally, with Phoenix’s Democratic mayor, Greg Stanton, asking Trump last week to delay his rally in wake of the violence.

The Charlottesville violence led cities across the country to consider removing Confederate statues, something Trump railed against Tuesday.

A crowd of protesters formed outside the convention center Tuesday, but the president bragged that there were far more Trump supporters in attendance.

“All week, they’re talking about the massive crowds that are going to be outside,” Trump said. “Where are they?”

He then mocked liberal protesters who had been demonstrating.

Leading up to the rally, it was believed Trump could announce a pardon at the rally for Arpaio, the former Arizona sheriff convicted of a misdemeanor charge for not obeying a 2011 order from a judge to stop his anti-immigrant traffic patrols. Earlier Tuesday, the White House said the president would not be announcing a pardon at the rally.

But Trump suggested a pardon – which would be his first as president – could be forthcoming.

“I’ll make a prediction. I think he’s going to be just fine,” Trump said. “But I won’t do it tonight because I don’t want to cause any controversy. Is that OK?”

Without specifically naming them, Trump dinged the state’s two Republican senators, Jeff Flake and John McCain, with whom he has sparred recently.

McCain, a frequent Trump critic who was recently diagnosed with brain cancer, irked the president by voting against the Senate’s recent plan to repeal and replace ObamaCare.

“One vote away – I will not mention any names,” Trump said of McCain.

Flake, who has battled with Trump on immigration, has been promoting a book that argues the GOP is in “denial” about the president.

Speaking of Flake, Trump said: “And nobody wants me to talk about your other senator, who's weak on borders, weak on crime. So I won’t talk about him.”

During his speech, Trump vowed to follow through on his promise to crack down on illegal immigration. He also said he isn’t giving up on repealing ObamaCare and expressed optimism about reforming the country’s tax codes.

Tuesday's rally came a day after Trump announced plans to send more troops to Afghanistan – an announcement he highlighted during his speech. “Did anybody watch last night?"

“Last night, as you know, I laid out my vision for an honorable and enduring outcome in a very tough place, a place where our country has failed, Afghanistan,” Trump said.

The president also addressed the recent escalation of rhetoric with North Korea. Trump referenced the country’s leader and said he believes Kim Jong Un is “starting to respect us.” Trump expressed hope that “maybe something positive can come about.”

High-ranking administration officials and other recognizable conservatives warmed up the crowd before the president spoke, including Vice President Mike Pence and Housing and Urban Development Secretary Ben Carson.

Several of them painted a picture of a divided country.

"Our lives are too short to let our differences divide us," Carson said. "Our differences are nothing compared to our shared humanity and the values that unite us."