Raffensperger has said that matching the signature on the outer envelope to the absentee ballot on the inside is impossible, because the ballots are separated from the envelopes when they are opened to protect voter privacy.

The Trump campaign, which formally asked for a recount Nov. 22, says that "without signature-matching, this recount would be a sham and again allow for illegal votes to be counted." Georgia certified President-elect Joe Biden as the winner on Nov. 20.

"Why won’t Governor @BrianKempGA, the hapless Governor of Georgia, use his emergency powers, which can be easily done, to overrule his obstinate Secretary of State, and do a match of signatures on envelopes," Trump tweeted Monday. "It will be a 'goldmine' of fraud, and we will easily WIN the state."

The tweets come a day after Trump told Fox News' "Sunday Morning Futures" that he is "ashamed" he endorsed Kemp during his 2018 race against Democrat Stacey Abrams. 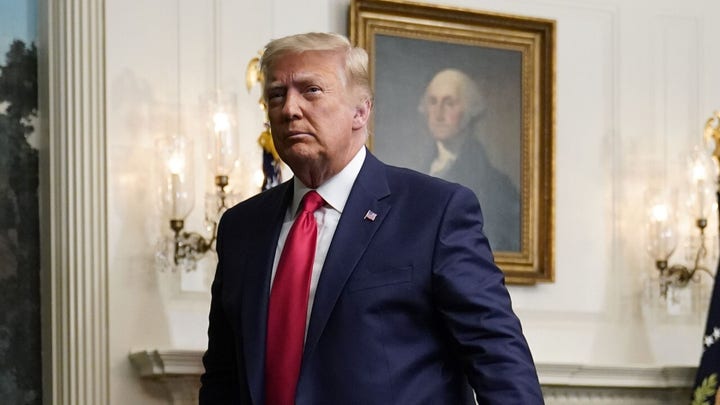 But emergency rules that were adopted ahead of the presidential election explicitly require, in order to preserve the secrecy of each individual vote as laid out in Georgia law and the Georgia Constitution, that ballots be separated from their envelopes so they cannot possibly be joined back together.

GEORGIA SECRETARY OF STATE SOUNDS ALARM AHEAD OF RUNOFF ELECTIONS

An emergency rule that was adopted earlier this year mandates that every absentee ballot goes through signature verification but that after the signature is verified the ballot itself is separated from the outer envelope with the signature.

After the Trump criticism, Raffensperger said Monday that "dishonest actors" are spreading "massive amounts of misinformation."

"There are those who are exploiting the emotions of many Trump supporters with fantastic claims, half-truths, misinformation, and frankly they are misleading the president as well apparently," he said during a Monday statement to reporters.

"We will continue to investigation credible claims of illegal voting and violation of state election law," he continued. "There are currently over 250 open cases from 2020 and we have 23 investigators to follow up on that."

In a Monday letter, the Trump campaign again asked Raffensperger to audit the signatures on absentee ballots and envelopes in all Georgia counties.

The recount was delayed in Fulton County, where a Dominion Voting Systems mobile server crashed, though election officials said the recount there would resume Monday.