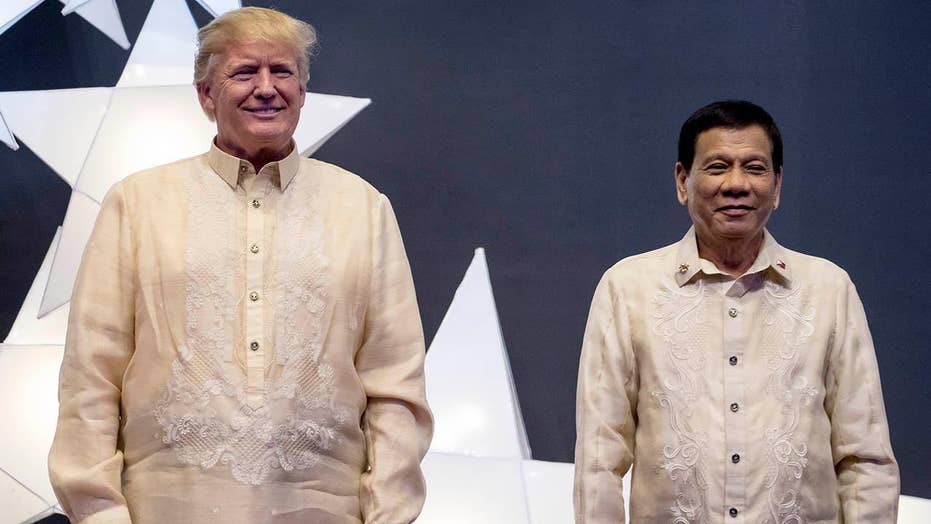 President Donald Trump is set to meet Monday with the so-called “Trump of the East,” Philippine President Rodrigo Duterte, another controversial world leader known for his ultra-tough approach.

However, the first formal sit-down between the two leaders may not trigger substantial changes in the Philippines' human-rights record. In fact, Duterte said last week that he would tell Trump to “lay off” if he raised the issue of human rights, according to Reuters.

This week, Duterte boasted that he murdered a man with his own hands.

Above all, Duterte has sanctioned a bloody drug war that features extrajudicial killing.

Duterte’s war on drugs has alarmed human rights advocates around the world who say it has allowed police officers and vigilantes to ignore due process and to take justice into their own hands. Government officials estimate that well over 3,000 people, mostly drug users and dealers, have died in the ongoing crackdown. Human rights groups believe the victim total is far higher, perhaps closer to 9,000.

Duterte has defended the violence strenuously and boasted of participating himself.

Late last year, he bragged that he personally pulled the trigger and killed three people years ago while serving as mayor of Davao City. And last week, while in Vietnam for an international summit, he said he took his first life years earlier.

“When I was a teenager, I had been in and out of jail, rumble here and there,” Duterte said during a speech in Danang. “At the age of 16, I already killed someone.”

He claimed he fatally stabbed the person “just over a look.”

His spokesman later tried to downplay the comment, saying, “I think it was in jest.”

Trump has shown little interest in pressuring Duterte to rein in the violence, instead saluting him during a May phone call.

“I just wanted to congratulate you because I am hearing of the unbelievable job on the drug problem,” Trump told Duterte, according to a transcript of the conversation that later leaked. “Many countries have the problem, we have a problem, but what a great job you are doing and I just wanted to call and tell you that.”

White House officials have suggested there is a strategy behind Trump’s flattery of Duterte.

Advisers have said that while Trump is unlikely to publicly chastise the Philippine president, he may offer criticisms during private meetings. Trump would plan to hold his tongue in public in order not to embarrass Duterte, whom he is urging to help pressure North Korea and fight terrorism, and to avoid pushing him into the arms of China.

Trump met Duterte for the first time at the Asia Pacific Economic Cooperation summit in Vietnam on Saturday.

The meeting was “short but was warm and cordial,” Duterte’s spokesman, Harry Roque, told Reuters.

“The leaders were generally pleased to finally meet each other in person,” Roque added.

Trump dismissed the notion that he buddied up to dictators.

He said Saturday he has great relationships with all sorts of leaders, “every person in that room today,” after leaving a summit in Vietnam attended by Duterte and Putin, among others.

In addition to meeting with Duterte, Trump is expected to attend the Association for Southeast Asian Nations conference on Monday to urge allies to pressure North Korea to give up its nuclear weapons program.

Trump’s trip to Asia was meant to be centered on trade, as well, where he held meetings with other Asian leaders to push his agenda for bilateral, rather than multinational, trade agreements.