Trump-Kim summit ends early over disagreement on US sanctions

President Trump and Kim Jong Un prematurely end their talks in Vietnam after reaching a standstill on the degree of denuclearization in North Korea; John Roberts reports from Hanoi, Vietnam.

The president cut short the highly anticipated summit in Vietnam, unwilling to meet Kim's Jong Un's demand of lifting all sanctions without first securing a meaningful commitment on denuclearization.

“Sometimes you have to walk,” Trump said at a solo press conference following the summit.

Even Susan Rice, former national security adviser under President Barack Obama and a vocal Trump critic, told NPR that Trump made the right move, as caving to North Korea’s demands for sanctions relief would have been a "tremendous mistake."

“For the United States to have agreed to lift all sanctions in the absence of real and complete denuclearization would have been a tremendous mistake,” she said.

Susan Rice, who served as the National Security Advisor under former President Barack Obama, has been critical of Trump's relationship with Russia. (AP Photo)

Rice argued the best deal would have been a gradual lifting of sanctions in exchange for serious moves by Pyongyang to shut down its nuclear program.

"I’m glad that the president walked away from that," Pelosi said Thursday during a press conference. "The prospects seemed dim."

Pelosi, however, was critical of Trump for not pressing the subject of Otto Warmbier, the University of Virginia student who was detained in North Korea in 2016. Warmbier was in a coma when he was released back to the U.S. and died days later. Trump stirred controversy by saying Thursday he didn't think North Korean leadership was aware of his treatment.

Pelosi said it's "strange," as Trump has in the past taken the word of Russian President Vladimir Putin over the U.S. intelligence community with regard to election meddling.

Senate Minority Leader Chuck Schumer, D-N.Y., meanwhile, tweeted that any deal with Pyongyang  that "fell short of complete denuclearization would have only made North Korea stronger & the world less safe."

Trump, speaking in Hanoi, Vietnam, told reporters he had asked Kim to do more regarding his intentions to denuclearize, and “he was unprepared to do that.” 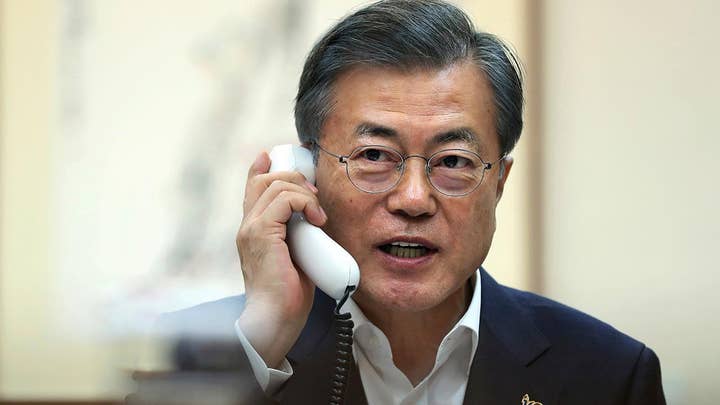 Trump specifically said negotiations fell through after the North demanded a full removal of U.S.-led international sanctions in exchange for the shuttering of the North's Yongbyon nuclear facility. Trump and Secretary of State Mike Pompeo told reporters that the United States wasn't willing to make a deal without the North committing to giving up its secretive nuclear facilities outside Yongbyon, as well as its missile and warheads program.

“It was about the sanctions,” Trump said. “Basically, they wanted the sanctions lifted in their entirety, and we couldn’t do that. They were willing to denuke a large portion of the areas that we wanted, but we couldn’t give up all of the sanctions for that.”

"I'd much rather do it right than do it fast," Trump added, echoing his remarks from earlier in the day, when he insisted that "speed" was not important. "We're in position to do something very special."

Fox News’  Chad Pergram, Gregg Re and Ryan Gaydos and The Associated Press contributed to this report.