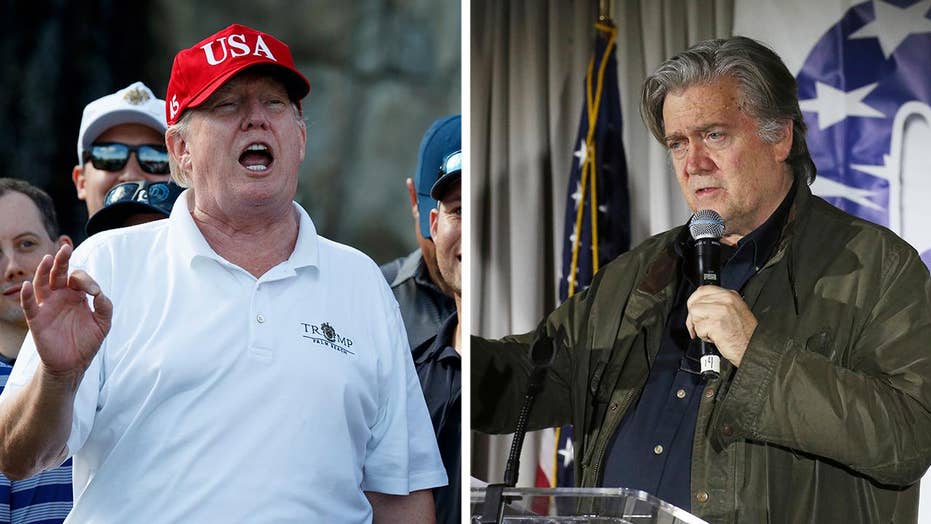 In the book, author Michael Wolff reports that the former White House chief strategist described a 2016 meeting between the president's son and a group of Russians during the campaign as 'treasonous.'

President Trump's legal team on Thursday sent a letter to the publisher and author of a forthcoming book about the White House demanding they immediately stop its publication, a day after excerpts led the president to issue a rare, blistering takedown of former adviser Steve Bannon.

The letter was sent to Steve Rubin and Michael Wolff, the publisher and author of “Fire and Fury: Inside the Trump White House.” It demands the halting of the book's publication and "a full and complete retraction and apology."

“Mr. Trump hereby demands that you immediately cease and desist from any further publication, release or dissemination of the book,” the attorney, Charles J. Harder, wrote in a letter obtained by Fox News.

Author Michael Wolff said he had access to top officials inside the administration, including Trump himself. (YouTube screengrab)

The book is set for release Jan. 9, but excerpts have begun to surface online.

The letter comes as Trump allies -- after a day of going after Bannon for his comments -- are now focusing their attacks on the book itself, and the author.

In the book, Bannon slams the president’s son, Donald Jr., Trump's son-in-law Jared Kushner and campaign chairman Paul Manafort and calls their infamous meeting with a Russian lawyer during the campaign “treasonous” and “unpatriotic.” It also claims many of the president's top advisers disparaged him in private.

Trump’s attorney didn't cite specific passages, but he argued the book includes “false/baseless statements” that could be “defamation by libel.” Harder requested the publisher send him a full copy of the book.

“In the near future, you should expect to hear from this office in greater detail on all of the foregoing issues,” he wrote.

Dr. Gorka: Wolff book is full of 'inaccuracies and lies'

Others in the administration also took aim at the book Thursday.

“We have become used to #FakeNews, now we have #FakeBooks!” Secretary of the Treasury Steven Mnuchin tweeted.

But in a story for the Hollywood Reporter on Thursday, Wolff explained how the book came to fruition, saying he had access to top officials inside the administration, including Trump himself.

Wolff said he asked Trump for permission to spend time hanging out inside the West Wing -- a request, he said, Trump did not deny, which may have caused confusion for senior aides.

“Since the new White House was often uncertain about what the president meant or did not mean in any given utterance, his non-disapproval became a kind of passport for me to hang around,” Wolff wrote.

During Wednesday’s press briefing, White House Press Secretary Sarah Sanders confirmed that there had been about a dozen visits by Wolff to the White House as he reported his book. She said  “close to 95 percent of them” were requested by Bannon.

The White House released a four-paragraph statement from Trump downplaying Bannon’s contributions to his campaign and administration and claiming he had “lost his mind.” (Associated Press)

Sanders said Trump was angry when he read what Bannon had said.

“I think 'furious,' 'disgusted' would probably certainly fit when you make such outrageous claims and completely false claims against the president, his administration and his family,” she said.

On Wednesday, the White House released a four-paragraph statement from Trump downplaying Bannon’s contributions to his campaign and administration and claiming he had “lost his mind.”

“Steve Bannon has nothing to do with me or my presidency,” Trump wrote. “When he was fired, he not only lost his job, he lost his mind. Steve was a staffer who worked for me after I had already won the nomination by defeating seventeen candidates, often described as the most talented field ever assembled in the Republican Party.”

Trump Jr. also fired back at Bannon in a series of tweets.

"Steve had the honor of working in the White House & serving the country," the president's son said. "Unfortunately, he squandered that privilege & turned that opportunity into a nightmare of backstabbing, harassing, leaking, lying & undermining the President. Steve is not a strategist, he is an opportunist."

Trump’s attorney has also sent a “cease and desist” to Bannon, arguing he violated a non-disclosure agreement signed during the campaign by disclosing confidential information, speaking to the media about the campaign and disparaging members of the Trump family.

Bannon spent just over a year formally working for the president, leaving the White House in August and returning to Breitbart News, the populist news site.

He joined Trump’s team in August 2016, when he was tapped as chief executive of the campaign.

After Trump won the presidential race, Bannon was appointed to a senior adviser role at the same time that Reince Priebus was named chief of staff.

Donald Trump Jr. also fired back at Bannon in a series of tweets. (Associated Press)

Appearing on Sirius XM’s Patriot Channel’s “Breitbart News Tonight” late Wednesday after the fallout, Bannon still praised the president and said he will continue to support him.

"The president of the United States is a great man,” he said. “You know I support him day in and day out, whether going through the country giving the Trump miracle speech or on the show or on the website.”

Speaking to reporters at the White House on Thursday, Trump referenced Bannon's interview, saying that "he called me a great man" but that he doesn't talk to him anymore.