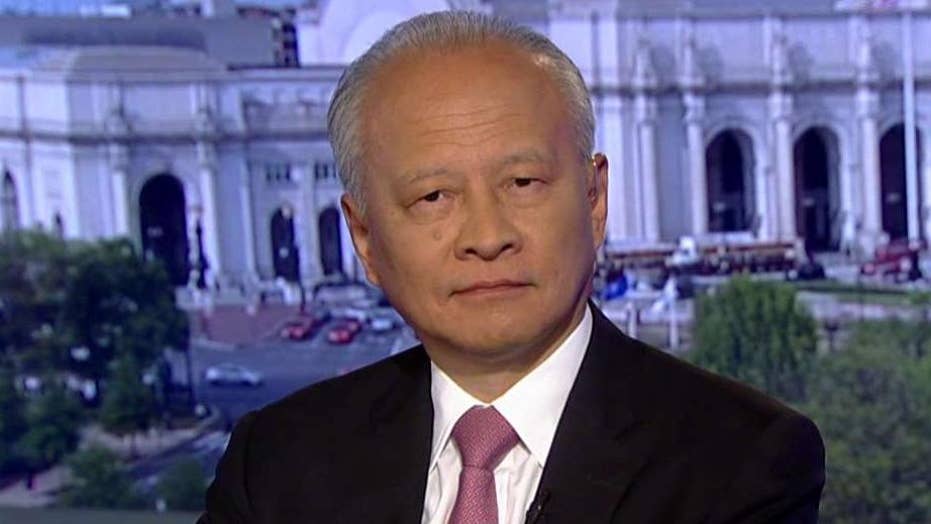 China is "committed" to forging a trade deal with America that will "serve the interests" of both countries, according to Beijing's ambassador to the U.S.

Ambassador Cui Tiankai made the remarks in a Tuesday interview with Bret Baier on "Special Report," in the wake of a breakdown in trade talks earlier this month.

"This trade deficit has a lot of structural reasons behind it. It's not just a simple game of numbers," Cui said. "But still, we are ready to address the imbalance in trade. We are ready to take action to buy more American products and services."

Cui said he is optimistic that a new trade pact will come to fruition if "both sides" of the negotiating table have the "political will" required to forge one.

"A good deal has to be made on the basis of mutual respect and mutual benefit," he said. "China remains ready to continue our talks with our American colleagues to reach a conclusion."

"We are still committed to whatever we agree to do," Cui said. "It is the U.S. side that changes its mind so often."

Baier also brought up the contrast between Trump's comments about China's role as an economic rival and those of former Vice President Joe Biden - the current Democratic 2020 front-runner.

Trump was addressing comments Biden made at a campaign stop in New Hampshire last week, where he said of China, "they're not bad folks, folks, but guess what, they're not competition for us."

"First of all, we don't want to have anything to do with American domestic politics," Cui said. "Honestly, very often it's almost impossible for us to make sense of it."

Cui added that China's aim is to "meet the growing aspirations of our people" and not to "seek global dominance or to compete with anybody else" to that extent.