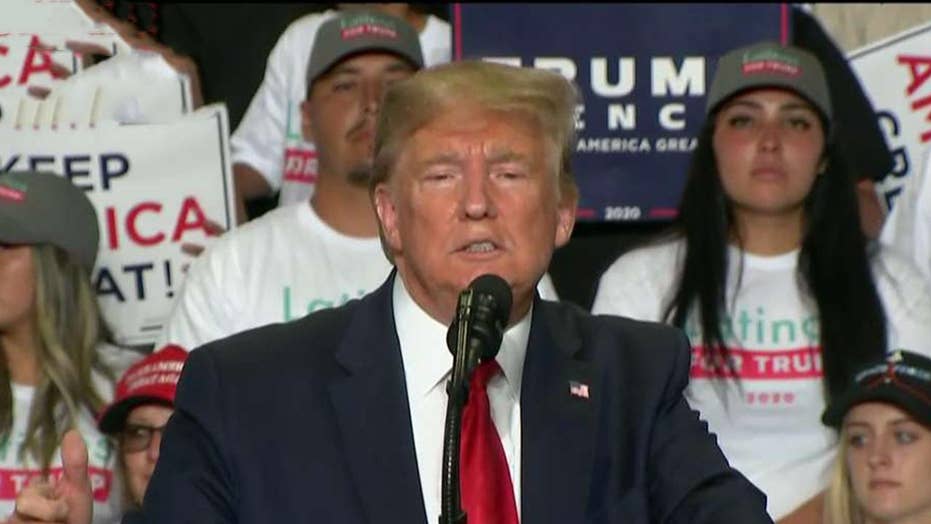 President Trump issued a full-throated call for resignations and changes in management at The New York Times during a fiery rally in Democratic-leaning New Mexico on Monday night, after the paper published a bombshell allegation of sexual misconduct against Supreme Court Justice Brett Kavanaugh -- before later acknowledging, under pressure, that the alleged victim said she had no recollection of the event.

The slew of Democrats running for president who quickly called for Kavanaugh’s impeachment over the weekend based on the Times' reporting indicated later on Monday they weren't backing down, despite the Times' major revision to the story.

"The left tries to threaten, bully, [and] intimidate Americans into submission," Trump began. "They try to blacklist, coerce, cancel, or destroy anyone who gets in their way.  Look at what they're doing today to Justice Kavanaugh. Do you see -- the Democrats are calling for his resignation. They're calling for his impeachment, and the woman involved said she doesn't know anything. So the New York Times had to put out a major apology, and they had to change their story ... and they still want him to be impeached!"

Trump added: "I call for the resignation of everybody at The New York Times involved in the Kavanaugh smear story, and while you're at it, the Russian witch hunt hoax, which is just as phony a story. They've taken the old Grey Lady, so prestigious, and broken her down, destroyed her virtue, and ruined her reputation. She can never recover, and will never return to greatness under current management. The Times is dead, long live the New York Times.

"Think of it -- they wrote a story about somebody and she said, 'I don't remember this,'" Trump concluded. His remarks echoed his statements earlier in the day on social media.

Meanwhile, Democratic Rep. Jerry Nadler, the head of the House Judiciary Committee, appeared to throw cold water on the idea of impeaching Kavanaugh. Nadler remarked on a radio show Monday: "We have our hands full with impeaching the president right now.”

That effort also appeared to be stalled, with top Democrats unable to agree on whether impeachment proceedings are currently occurring.

The explosive rally in suburban Albuquerque came hours after New York City prosecutors went on the offensive by subpoenaing Trump's tax returns. But Trump's presence in the Democratic-leaning state was itself an aggressive maneuver that signaled a new campaign strategy.

The event is the first stop on a three-day swing that will also take him to California for fundraisers expected to raise more than $15 million. The county where the rally is being held, Rio Rancho, went to Hillary Clinton in 2016, if only by just 1,800 votes.

"We will win the great state of New Mexico in 2020," Trump said at the outset of the rally, before touting the state's economic progress under his administration.

New Mexico is in the midst of an oil-production boom that has boosted employment and spurred a state government spending spree from first-year Democratic Gov. Michelle Lujan Grisham on public education, roadway projects and tax rebates for film productions.

"Crude oil production has more than doubled, and it's going up higher, quickly," Trump said. "And your state's energy revenues are up by nearly two-thirds. Think of that."

Chants of "Four more years!" broke out. Trump said the current spat with Iran in the Middle East would have caused a "panic" under previous administrations, when the U.S. was not a net exporter of energy and had not attained energy independence.

'IT'S LOOKING LIKE' IRAN BEHIND SAUDI DRONE ATTACK, TRUMP SAYS, AS HE WARNS U.S. IS 'LOCKED AND LOADED'

"Thank you very much, President Trump," Trump said. "Now, under the Green New Deal, all of that goes away. No more cows. No more airplanes."

"Thank you very much, President Trump."

Trump's efforts in New Mexico will provide a test of how well his often-harsh rhetoric about immigrants will play with Hispanic voters, who comprise nearly 40 percent of New Mexico's electorate.

"Yesterday marked the beginning of the Hispanic Heritage month," Trump said at the rally. "Who is Hispanic here? Latinos for Trump, right? Incredible people."

The president went on to praise Mexico's efforts to assist in border enforcement, which commenced after Trump threatened the country with punishing tariffs. Border apprehensions have plunged as a result of that assistance, administration officials said, citing the latest data from the Department of Homeland Security.

Trump is looking to find the next Wisconsin or Michigan — states that Democrats generally win in presidential elections but that can surprise under certain conditions, as they did in 2016. Also on the Trump team's shortlist: Nevada, New Hampshire and Minnesota.

New Mexico has not tilted toward a Republican in the presidential election since 2004. Trump captured just 40 percent of the state vote in 2016.

Hillary Clinton fell short of a majority victory, with 48 percent support in a state she did not visit.

Recent indicators have not been favorable fo the GOP. Last year, Republicans lost a House seat and the governor's mansion. Last week, a congressional candidate went viral by taunting the president by name in an ad.

Rep. Ben Ray Luján, who is running in an open Senate primary to replace retiring Democrat Tom Udall, greeted news of Trump's rally in New Mexico at first with mocking disbelief, and then with a tweeted string of stern warnings.

"Rio Rancho is in my district, and anyone who undermines the safety, security, or way of life of our communities, isn't welcome here," he wrote.

Still, campaign officials say a Trump rally in nearby El Paso, Texas, last February was well attended by female and Hispanic voters and travelers from New Mexico, suggesting that New Mexico is in play.

Hundreds of people showed up early Monday to claim a place in line ahead of the evening event in Rio Rancho. Protesters, for their part, vowed to step up acts of civil disobedience and demonstrations.

Trump's first visit to New Mexico as president drew visitors from Colorado, California and all parts of New Mexico, according to local media reports.

“This is New Mexico. A lot of people in New Mexico really like Trump because he’s fighting for them,” an attendee told local station KRQE-13.

Some observers, however, have their doubts.

"Bush had much higher favorable opinions by Hispanics," said Lonna Atkeson, a political science professor at the University of New Mexico, who noted Bush defeated Sen. John Kerry 15 years ago by winning over large rural swaths of the state. "He was from Texas, not New York, and so he had more regional ties. ... Trump paints a very different portrait."

Among those waiting for the president in New Mexico was former CIA operative Valerie Plame, the top contender in a crowded Democratic primary race for New Mexico's northern congressional district, which Luján currently represents. Plame noted she has a "few scores to settle" with the president in a swaggering new video that shows her speeding across the desert in a muscle car — in reverse — before spinning forward in a swirl of dust. The campaign advertisement's accuracy was questioned.

The Trump campaign said that the situation on the ground in the state has changed significantly since 2016. In August, Vice President Pence declared New Mexico was back "in play" politically in a visit to the Permian Basin, a booming petroleum production zone overlapping portions of southern New Mexico and western Texas.

"We have the opportunity because of our fundraising and infrastructure to not only defend the states we carried in 2016, but to extend the map in 2020," said Rick Gorka, a spokesman for a fundraising committee for Trump's reelection campaign and the Republican National Committee.

"The most valuable commodity that we have as a campaign is the president's time. And he will not travel all the way to New Mexico for a head fake," Murtaugh said.

Gorka said New Mexico is a big part of that strategy, as are Minnesota, New Hampshire and Nevada.

President Trump boarding Air Force One at Andrews Air Force Base for his trip to Albuquerque on Monday. (AP Photo/Evan Vucci)

Lujan Grisham, meanwhile, took aim at Trump ahead of his visit, describing the president as being demeaning to Hispanics and immigrants since being elected. She also said Trump's policies had resulted in increased taxes for some New Mexicans.

Specifically, she has pilloried Trump's border wall while withdrawing most National Guard troops from the border and suing the U.S. Homeland Security Department to recoup spending by local governments to shelter and feed asylum-seeking migrants released into southern New Mexico towns such as Las Cruces and Deming.

Trump will stay in Albuquerque on Monday night, then follow up his rally by flying to the San Francisco Bay area on Tuesday for a luncheon fundraiser. He'll then attend a fundraising dinner that evening in Beverly Hills at the home of real estate developer Geoffrey Palmer. He has two more fundraisers planned in Los Angeles and San Diego on Wednesday.

The fundraisers will benefit Trump Victory, the joint entity that funds Trump's reelection campaign and the Republican National Committee.