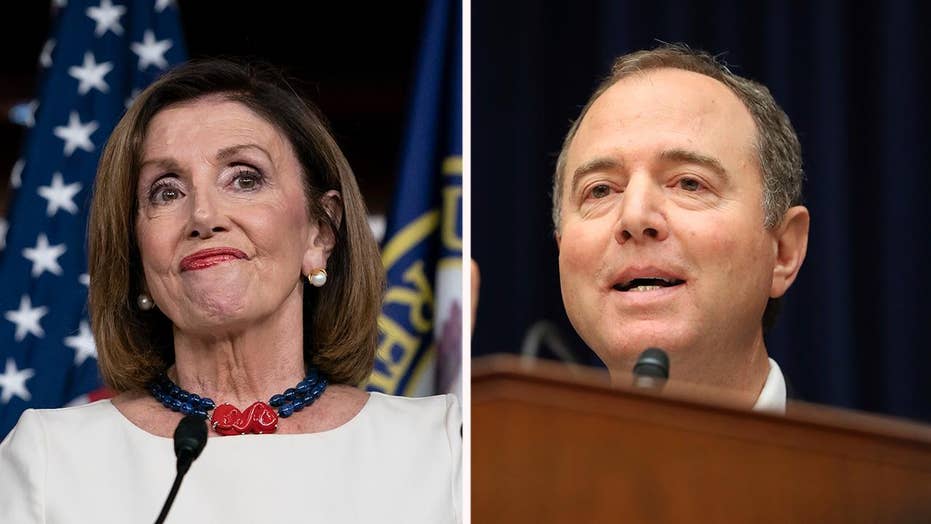 President Trump’s 2020 campaign launched a new ad Wednesday that takes on Democrats’ impeachment efforts, accusing them of staging a "coup" to oust the president.

It addresses the whistleblower complaint over Trump’s July 25 phone call with Ukrainian President Volodymyr Zelensky, featuring a clip of Sen. Lindsey Graham, R-S.C., calling it “based on hearsay.” It also focuses on House Intelligence Committee Chairman Rep. Adam Schiff, D-Calif., who discussed the complaint while using language he claimed was “parody.”

PELOSI: PRESIDENT TRUMP UNDERMINED OUR NATIONAL SECURITY, HIS OATH OF OFFICE AND INTEGRITY OF OUR ELECTIONS

“Democrats are trying to undo the election regardless of facts,” the ad opens, displaying images of House Speaker Nancy Pelosi, House Judiciary Chairman Jerrold Nadler, D-N.Y., Schiff, and members of the “Squad” of freshman congresswomen with whom Trump has feuded, including Reps. Alexandria Ocasio-Cortez, D-N.Y., Rashida Tlaib, D-Mich., and Ilhan Omar, D-Minn.

Wednesday, House Minority Leader Kevin McCarthy, R-Calif., added his name to a resolution calling for Schiff to be censured. McCarthy is now the most high-profile Republican to sign on to the resolution that was introduced last Friday by Rep. Andy Biggs, the Arizona Republican who chairs the conservative House Freedom Caucus.

During a hearing featuring testimony from acting Director of National Intelligence Joseph Maguire, Schiff, as if he was quoting the text of Trump's phone call, took some liberties in making the president's statements seem more egregious.

“I have a favor I want from you,” Schiff said while appearing to read from a paper. “And I’m going to say this only seven times, so you better listen good. I want you to make up dirt on my political opponent, understand? Lots of it, on this and on that.” Schiff later admitted that he made it up, stating that it "was meant to be at least, part, in parody."

“Chairman Adam Schiff has been lying to the American people for years,” McCarthy said in a tweet. “Now he is so desperate to damage the president that he literally made up a false version of a phone call. Enough is enough.”

“It’s nothing short of a coup and it must be stopped,” it closes, over images of Pelosi and Trump’s potential 2020 opponent, former Vice President Joe Biden.

The spot is part of an $8 million ad buy, which the campaign previously announced, in addition to a separate Republican National Committee $2 million ad buy with different spots.