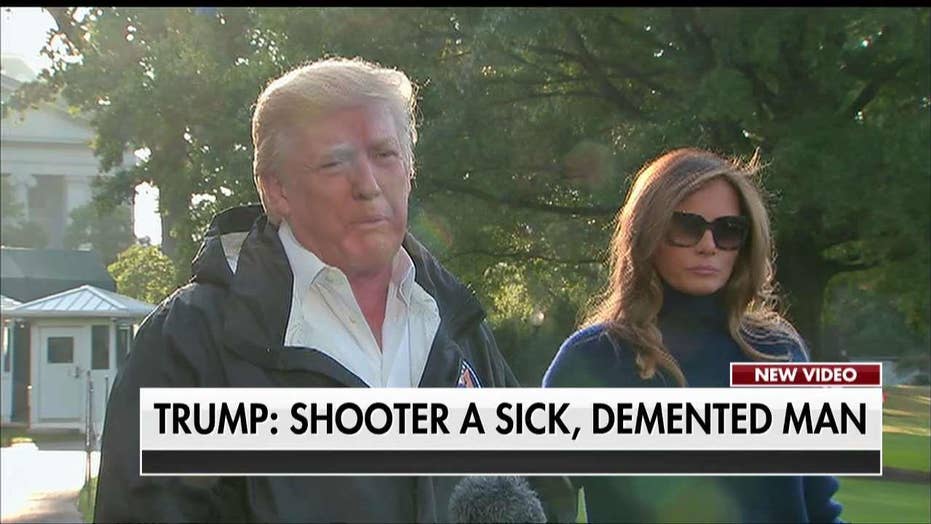 President Trump called the Las Vegas shooter a “sick” and  “demented man” on Tuesday, as the death toll in Sunday night’s massacre rose to 59 and authorities continued to investigate motive.

“He was a sick man, a demented man, lots of problems I guess,” Trump said. “We’re looking into him very, very seriously. But we are dealing with a very, very sick individual.”

The president, who a day earlier called the massacre an "act of pure evil," went on to praise law enforcement and police for their quick response to the scene, calling it “a miracle.”

The gunman, 64-year-old Stephen Paddock, killed himself after the massacre.

The president’s comments came as he and the first lady departed the White House for Puerto Rico after facing criticism for the administration's allegedly weak response to the storm-ravaged island.

“In Texas and in Florida we get an A-plus, and I’ll tell you what, I think we’ve done just as good in Puerto Rico,” Trump said as he and the first lady walked toward Marine One.

The president is expected to spend at least five hours in Puerto Rico to meet first responders, local politicians and some residents.

Over the weekend, San Juan Mayor Carmen Yulin Cruz blasted Trump, saying “we are dying, and you are killing us with the inefficiency.”

Trump fired back on Twitter over the weekend, slamming Cruz for her “poor leadership ability.”

“Such poor leadership ability by the Mayor of San Juan, and others in Puerto Rico, who are not able to get their workers to help. They want everything to be done for them when it should be a community effort. 10,000 Federal workers now on Island doing a fantastic job,” Trump tweeted over the weekend.

But on Tuesday, Trump seemed to ease off his criticism of Cruz, saying she “has come back a long way.” It is unclear whether Cruz will participate in Trump’s events Tuesday.

“I think she’s come back a long way and I think it is now acknowledged what a great job we have done and people are looking at that,” Trump said Tuesday. “Now the roads are cleared, communications are starting to come back.”

Trump added that “on a local level” Puerto Rico needed to “give us more help.”