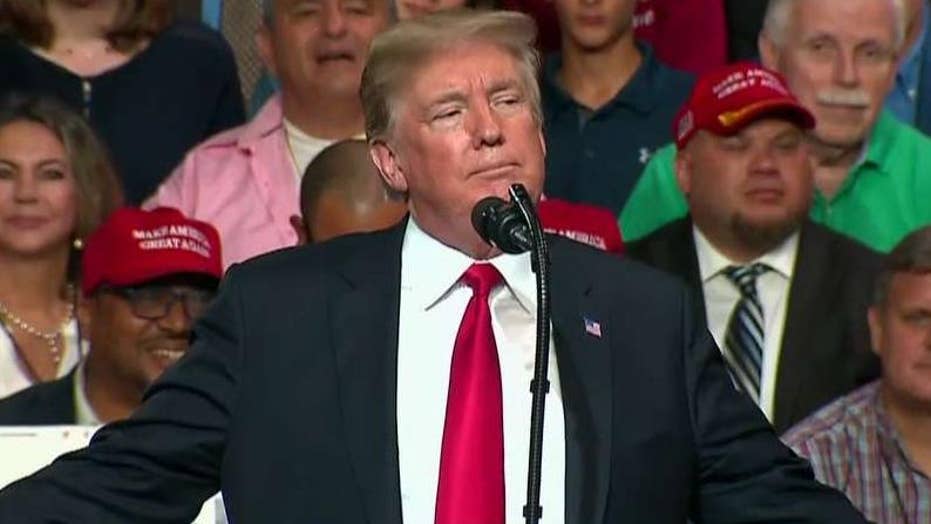 President Trump calls for respect for ICE and Border Patrol at Florida rally.

"I don't do these endorsements easily," Trump told an enthusiastic crowd during his rally at Tampa's Florida State Fairgrounds. "I don't need to be here, but I happen to love this state."

The rally took place with four weeks to go before the Aug. 28 Republican gubernatorial primary, in which DeSantis will face off against state Agricultural Commissioner Adam Putnam.

Trump touted the congressman as "a true leader", "a proud veteran", "my great friend" and predicted: "he's going to be your next governor."

"I appreciate your support, Mr. President," DeSantis said after Trump called him up on stage. "But I appreciate more the leadership you're showing for our great country."

Trump also implored supporters to back Scott against Democratic Sen. Bill Nelson, who he said was "[Chuck] Schumer-controlled, [and] Nancy Pelosi-controlled," referring to the Senate and House Democratic leaders.

"You know, I live a lot of time in Florida," Trump said. "The only time I see Bill Nelson is five months before every election. And after a while, you forget: 'Who's the senator?' But around five months, you see him at parties and you see him around ... We have to make sure that Rick Scott wins and wins big."

The speech was notable for Trump's emphatic call to implement stricter voter ID requirements in apparent response to some cities giving illegal immigrants the right to vote in certain elections.

"Only American citizens should vote in American elections," Trump said. "Which is why the time has come for voter ID, like everything else.

Trump also publicly pondered the idea of talking to Iran's leaders, one day after saying he'd meet them without preconditions.

The Florida gubernatorial contest is the latest GOP primary into which Trump has injected himself, having previously helped candidates in Georgia, Alabama and South Carolina with endorsements that have helped set the stage for the fall elections.

RON DESANTIS TEACHES HIS KIDS ABOUT TRUMP IN CAMPAIGN AD

Last month, Trump endorsed DeSantis, saying that he would be "strong on borders, tough on crime [and] big on cutting taxes."

Florida represented a crucial triumph for Trump in the 2016 presidential election and the president has maintained a steady presence in the state, returning frequently to his winter home in Palm Beach.

Appearing at a technical school in Tampa earlier Tuesday, Trump praised the strength of the economy, telling students and faculty members there was never a better time to learn new skills and gain employment. He was joined by Scott, Education Secretary Betsy DeVos, daughter and adviser Ivanka Trump and several members of Congress from Florida.

DeSantis has tied his campaign for governor directly to Trump, even teaching one of his two children to "build the wall" with blocks in a recent campaign ad.

Putnam, a former congressman, has run a more traditional campaign for governor, barnstorming the state with campaign events aimed at building upon his family's deep ties to the state.